Have been offered one of these but i know nothing about them! Was just wondering if anyone on here has any experiences with them?

Don’t know about them but always hear there shite from people that have had one. But if it’s cheap enough and looked after might be worth a shot. How much is it?

the reviews on em are pretty good,
its got sm wheels and off road wheels with it, lots of spares, around the 1400 mark but probably a straight swap for my bandit, i just fancy somthing for the lanes and i dont really get out on the bandit!

I think the last of the line was more solid, the early ones being a bit weak. There was urban gossip about half the engine (top or bottom) being fed oil via splash rather than pump? Its a heavy bike, more XR the KTM light weight…thats the bike weight not the light weights who ride’em!

Yeah, I got it, absolutely love it, got the knobblies on it for now:D the sm wheels are waiting for some nicer weather,

Bike feels real nice and solid, took it out on Sunday on some green lanes in Dorset and had no issues what so ever, I wanna find some cleaner plastics so it looks a bit better when on the road but for now I’m well happy, I’ll post up some pics when I get the chance:D

cool stuff:cool: maybe best drop oil and filters if the last owner aint changed it in a while, hope you get more miles per change as use ktm rfs lot 300miles:w00t:

Nice one! Cant wait to see the pics:cool:

gave the bike a good going over, changed a couple of out of shape bolts, got oil filter and drained oil, been looking on the net to see whats best oil for it, a couple of posts from the states i think, have said 20-50, but im not too sure, i’m sure book oil is 10-60 but cant find anything to confirm this!!

i know parts/spares back up for these bikes is dog **** but even info on the net for em is sparce!!:hehe:

Check or ask at http://www.seventeeninches.co.uk/forumdisplay.php?f=8 for more info.

heres the pics from before i went to look at it,

notice the gaffa tape on the plastics:D the over spray from a rattle can on the exhuasts:hehe:

it was only 5 miles up the road so thought i’d entertain the idea! 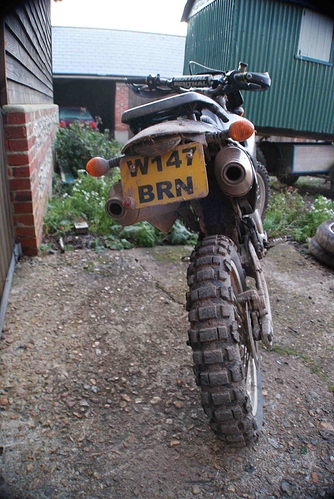 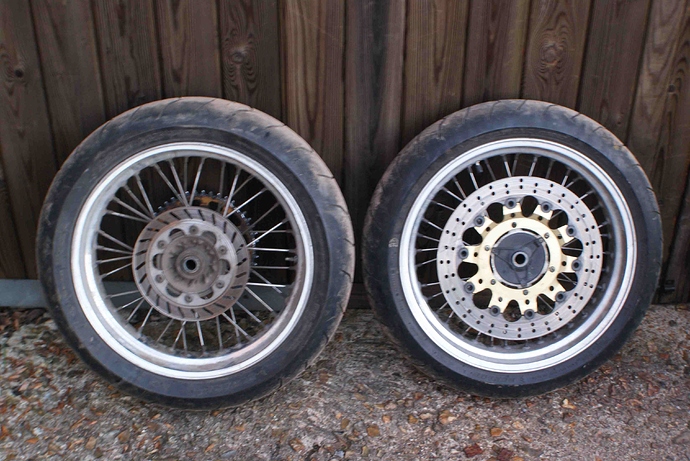 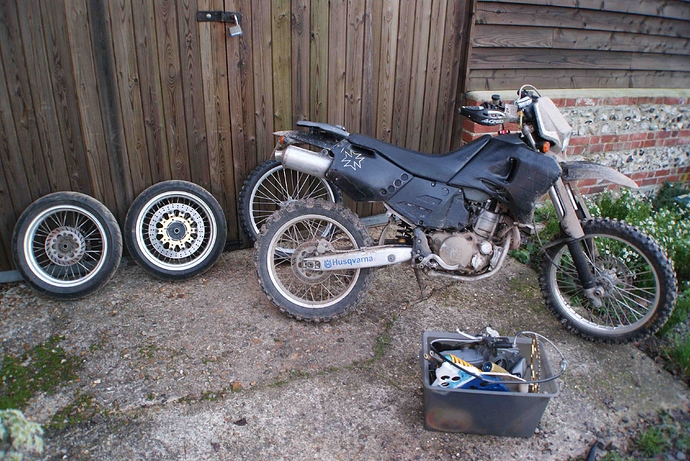 well, as you know i got her, i gave her a good going over at the fella’s house picked up a couple of small bits, a snapped bolt on the right footpeg hanger a bolt missing from the brake disc, the overspray the gaffa tape etc, apart from that it was pretty faultless, seals in good nick no sign of oil leaks, oil looked good, all electrics working, bearings all nice, in ran really sweet too,

i took it out on sunday round some green lanes down this way in the snow and had no issues whatsoever,

so now ive got it on me bench, new brake fluid, fresh oil and filter, a good clean up, tidy the plastcs,lube the cables, nut and bolt check throughout, grease throughout and get the paint cleared off the bits it shouldnt be on!!
not gonna give it a proper bullshit going over until the weather clears up a bit when the SM wheels will go on, i wanna source some new plastics for it but damn are they hard to find!! 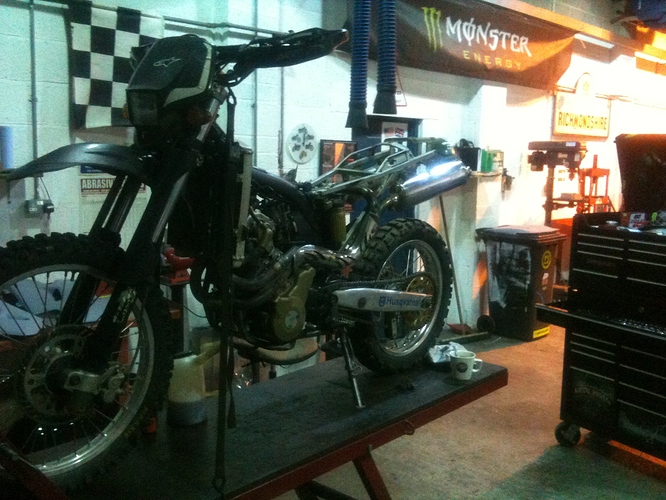 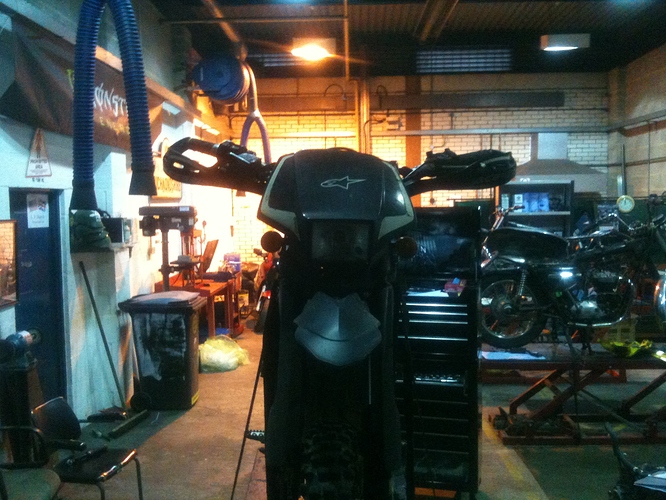 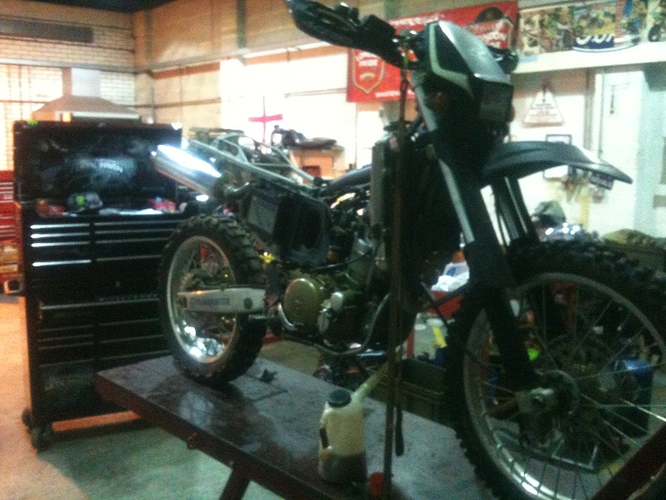 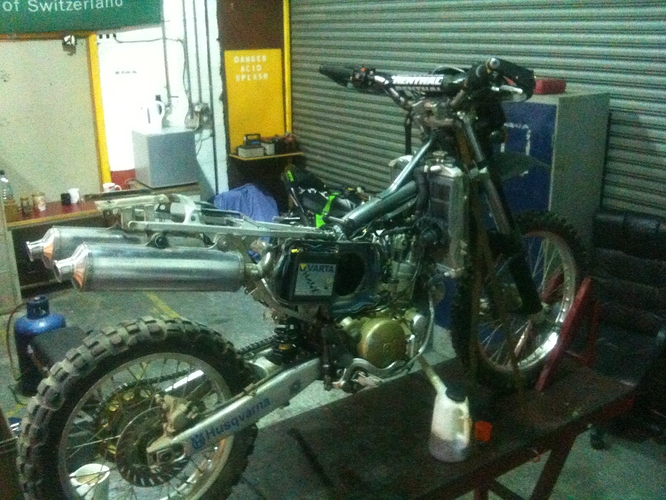 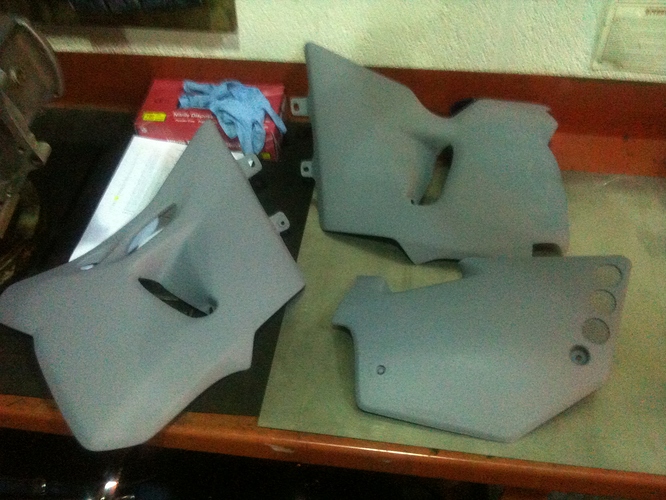 I read lots of good things about the 610te
Very capable, well-rounded machine.

Hey what are you doing in that workshop, dont you dare start messing with that bike, it’ll end up being all cleans and sparkly like heinb’s bike!

looks good mate:) all i could find on tinternet ishttp://www.motocross-shop.de/motocross-shop/product_info.php?cPath=59_207&products_id=15986

MD thanks for the link, that’s the closest I’ve got to finding any, will get some ordered:),

Sneaky, it’s not gonna be in the workshop for long! Just wanted to know my way around it before getting stuck in the middle of nowhere:D

Sneaky, it’s not gonna be in the workshop for long! Just wanted to know my way around it before getting stuck in the middle of nowhere:D

Lets face it mate, do you want your bike to look as mint as mine:

The end of that gear lever looks a bit clean in the first pic!!

The end of that gear lever looks a bit clean in the first pic!!

Yeah, sorry about that, its nicely corroded now m8!