What is your favourite bike you've owned...?

So, you may list ONE bike, tell us what it is and the year of manufacture.

I’ll kick this off then…

1999 Yamaha FZS600 Fazer in red. My first big bike, comfy, semi faired, saw me down to Corsica and back, good midrange so easy round town and could hustle and scrape the pegs when the pace quickened up…

Look forward to seeing the answers!

Mine’s going to be similar to yours and for the same reasons too: 2001 Yamaha FZS600 Fazer in Black

For you whippersnappers out there Yamaha took the engine from their TZR250 250 twin cylinder 2t race rep & put it in a trailie chassis, riding one is the most giggletastic form of existence known to man.

Interesting, 4 replies so far & all Yams!

Yes, red Fazers are better than black ones.

Well mine was an Honda NSR 125 took my Mod 1 and 2 on it. Everyone said I would never do a U turn or anything else for that matter…but we had a many good times and one bad when Nessie decided to have a engine failure at 40mph and snaked across the road!

2t little monster other wise known as Nessie. This will be my favourite bike.

1992 Honda CR500. The beastie of the moors. Twas 500 cc of t stroke fookin mental that would lift the front in every gear and has shaped my road bike choices all my life. There will never be another hit like that one but it ain’t stopping me trying to find it.

Gsr600. Fun bike. Chuckable, quick. Haven’t had enough time on a dirt bike but a WR450 that I learned on was immense 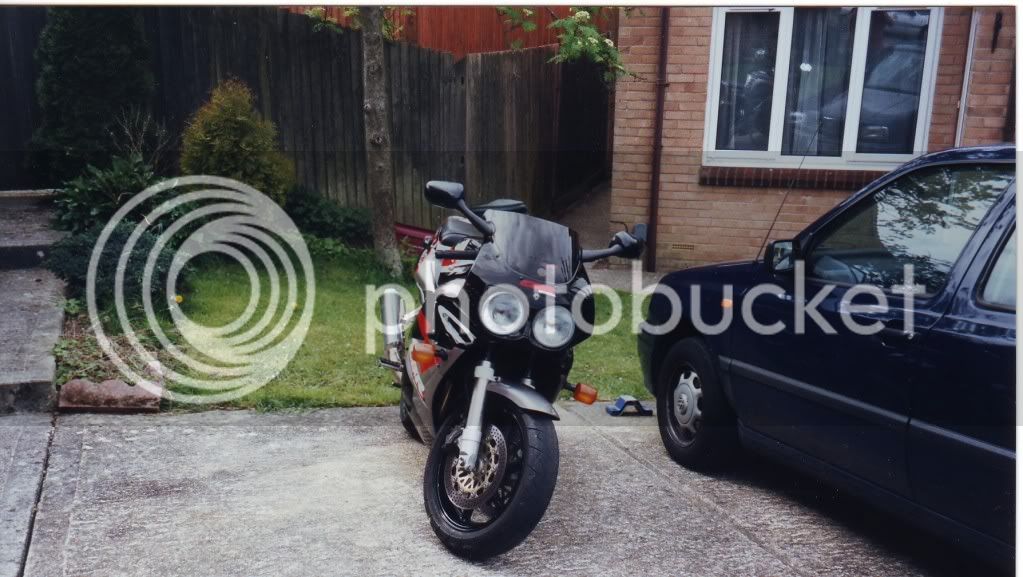 Has to be my old 1993 RRP Fireblade, these pictures were from around 1999. Owned it for 4 years. It was a US import, hence the colour scheme. It was the first bike I owned which I ‘connected’ with. I felt I could do anything on it, did some serious miles on it as it was my only mode of transport at the time. I commuted on it, toured on it, went to WSB and GP races and sunday blasts. Sold it for money reasons and I don’t mind admitting I had a lump in my throat and a tear in my eye when it was ridden away. Fantastic bike and very, very quick but I was about 5 stone lighter back then

The current RR is sublime, I think your first bike is always special though as everything is new and exciting on it.

My fav would have to be my ole Yamaha XJ900F from 1993. She’s a heavy lump but had been my dream bike when I started riding 20 odd years ago. Have had her for 16 years now.

It doesn’t really matter what it was, it’s a generic thing. The first motorcycle you own. (Unless it was a crock … s… it almost has to be.)

In my case that will be a Royal Enfield 350 Bullet (registered as a 250, so learner legal in those days) which I rode home from the seller.

I suppose being of legal age, holding any form of licence, having insurance and such stuff might have been handy?

There have been much better bikes since, but that first bike…

learned so so much on it, in the first month of owning it it nearly killed me, but she never went down…

learned how to commute and filter on it, previous experience was on scoots and 125’s, completely different to a bike with a bit of go, i learned to ride the lanes on it, taught me how to get my knee and pegs and toes down, first bike i ever see 130mph+ on, man i miss that little beasty and her twin port blue flame pipe thumping away.

she was written off in October 08 by a BMW Z4 in , pulled out on me and walloped me good, spilt my rad in half, showered me in headlight plastic as i tried to go round her and went over the bonnet, borke the rocker cover and cylinder head, smashed cracked every panel, sad times man:(

i was ok apart from a bashed knee and bruises

I disagree with the ‘first bike’ thing…

I had a puch maxi, a gorgeous old cb125, and a cg125, so my fourth was the Fazer. I also bloody love my ninja A1P, put hundreds of hours work into it with the rebuild, ridden the rubber off of it, crashed it, smashed it, done a 950mile day on it… The only thing that lets it down is the massive turning circle and instability at low speed and low revs. The Fazer beat it hands down on the commute.

Rob, your '93 blade is a thing of absolute beauty. My '94 streetfighter is edging closer to completion, I absolutely cannot wait to get it rolling!