What helmet are you wearing?

What helmet are you wearing and what’s the safety rating?

I been using the Scorpion 400 for about 8 months now. Lining is very good and comfortable. I’m starting to see some loosing of the vent closures on top. It’s Snell 2000 rated.

Mate, I am in the office and it’s to hot to wear a helmet and I get odd looks.

I have 2, the eldest being a Shoei XR900 (pictured in my avatar) that I got my mate to paint. Use this for general day to day commuting.

And just bought an Arai Astro R at the Ali Pali earlier on in the year. Which is saved for rideouts and track days.

Out of the 2 the Astro R is by far the best fit, and the more comfortable. But you can’t beat the uniqueness of a custom paint job…

good in the summer but useless in the winter

Arai Astro R with red tattoo design - see post attachment. I’ve had this for about two years now and will probably upgrade again next summer.

For pillions I have a 1 month old Shoei Raid II in plain black. 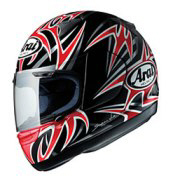 Arai Doohan rep and I love it! Had AGV’s and Sheoi and have found it the best lid that suits me by far.

Shoei for me to

Arai’s all the way for me. Have tried all sorts of lids but Arai fit best so thats what I wear. I have a RX7 Corsair Nakano Green which I usually wear on the road. I have 2 Arai Astro Race Walker’s for the race track. I also have a quantum f, but I never wear it anymore and must get round to binning it.

From what I have been told, the new helmet laws in Japan are very stringent. Arai pass and Shoi don’t. I also know that you can get an Arai visor and fold it in half without it breaking or cracking.

I have crashed, quite heavily in Arai’s and never had any issues. I crashed in a Shoi last year, admittedly pretty hard, but the lid cracked through at the front and back.

I’ve got the red tattoo as well.

I chose the Astro R because of the removable liner which I can wash, and I like Arai’s. It got a bit battered in my recent accident so I’m going to be buying a new one and I might try a Suomy for a change.

Arai and a BMW system V.

quote “What helmet are you wearing and what’s the safety rating?” unquote

I’ve got 2 x Airoh Tyger, a matt black and a red/black one, and 1 Airoh S4 Supermoto matt black. I love those lids.

I’m a big Suomi fan… I’m on my second one now and I rate them for comfort, fit, removable lining and design…

i got a collin edwards rep, only thing was i had to buy the bike to match it

have had it a year and like it a lot