Transporting a cat on a motorcycle?

What’s the best way to transport a cat on a motorcycle? Can you just stuff it down your jacket and zip it up? Plonk it on the petrol tank and hope that the survival instinct kicks in when you twist the throttle and let the cat find it’s own way of balancing on the bike? Shove it inside some panniers? Sit it on the back of the seat and let it ride pillion?

I’ve heard cat’s are surprisingly nimble and have rather good dexterity, so I can imagine they’ll sort themselves out quite well. What kind of speeds can a cat cope with? 60mph? 80mph? 140mph? 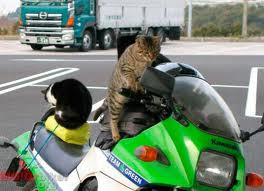 It look’s like they love being on motorcycles, apparently you have to keep the speed up though or else they jump off. Shouldn’t be difficult on a motorway though. 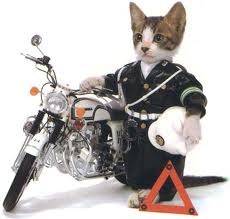 randomly enough, I saw a vespa rider today pulled over by a trike - community support copper and he was standing on the side of the road holding what I thought was his cat. no where to put the cat though but they were chatting happily away (not the cat

I was told I’d never get any pussy riding a fazer, thankfully it’s the four-legged kind. 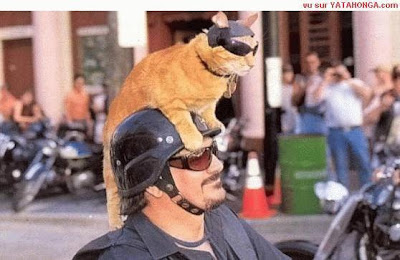 Mine gets strapped in its box to the back . It dont care about the bike . The cat hates the box no matter what … The box could be falling into the sun and the only thing that matters to that cat is its in the box .

You can get tank bags made for pets. Google it.

as Dan said, you can get tank bags for small pets.

We have 2 cats but my wife would never allow them on a bike, she wouldn’t let me get on the bike if she had any choice.

I can imagine the scratched forearms I would get trying to jam daisy the cat into a tank bag, Tinker the cat is more docile but is also a fat bugger and would adversely affect handling.

There would be certain filtering advantages to having daisy in a ventillated topbox - she screams like a police siren every time she ges in the cat box so cars might pull over & let me past. i just need a flashing blue pet hamster to sit on the fairing.

Give the cat 2 minutes in the liquidiser and transport it in a thermos.

This thread is amazing. My cat only likes my bike when it’s stationary: I had friends who had to transport a cat from cambridge to bristol when moving house so sedated it. one of the funniest things I’ve ever seen was it coming round again.

Can you take a cat on a track? I’ve been reading through the general rules of track racing and I can’t see anything regarding carrying a cat. I can’t possibly think of any reason not to let a cat on a track, in some cultures I believe it’s very lucky.