So which motorbike wins?

Any bike you can do this on

can you do that on a bike that doesn’t allow you to turn off tc/abs on the rear wheel?

Pull the fuse out

Any bike you can do this on

you can also do them while one the bike

Really depends on the handlebar lock. Most sports bike are terrible, you’d be looking at adventure, supermotos and some naked bikes.

Ultimately it would depend on the skill of the rider.

I guarantee you if I do this on the bike, I’ll very soon be off the bike, with the bike doing it on its own…

But @duke390 what’s reason behind your question? Is it because you are looking at next bike and want something nimble? Because you want another bike and the garage / parking space you have is very tight? Or is it just a general thing that an answer would be interesting…?

As Kevsta said, the skill of the rider is more likely to be a determinant of turning circle than any differentce on paper / specs. But if we’re talking about the turning circle when pushing the bike, that’s a different story.

Here’s another way of doing it.

you can also do sidestand turns

But @duke390 what’s reason behind your question?

If it is for demon filtering technique, nothing beats a small scooter.

Am I the only one who doesn’t like spinning the bike on it’s side-stand? It always feels like it’s stressing the stand mount. I’m worried it’ll snap off in the frame one day. Also it can mark the floor.

I cringe when I see people doing it. Especially on KTMs as the side stand is attached to the engine casing. I did see someone at the Ace doing that on his 600 sports bike, and watched as it snapped. Most of the Jap 600s use a cast side stand and they aren’t as strong as you think.

use a cast side stand

Castings are good in compression, useless in torsion. So yes, fine for their intended purpose but useless for rotating a bike around.

i have done it but yeah, conscious of the danger

Honda side stands are pretty robust but some of the Yamaha ones flex like a tooth pick. I do it occasionally. It’s handy if you have to move the bike in a confined space. 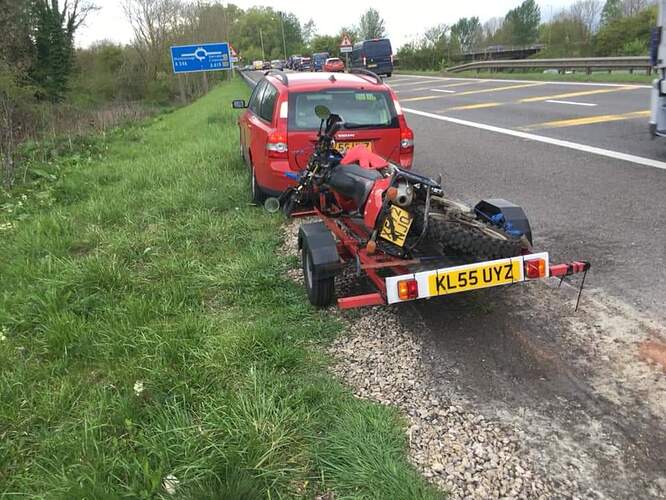 a great car though

It’s my second Volvo, I had a V70 for a week before I destroyed the engine. That was lovely though, I think the seats were more comfortable then my living room