Stopping at the Advanced Stop Line

Following on from the conversation about bike boxes in Can anyone explain central London cameras to me please? - #20 by Michael748 I was thinking of this as I was the first vehicle to arrive at these traffic signals on red, on Hall Rd this morning.

The road-positioning question for the first to arrive is a bit tricky. The road isn’t marked as two lane but because of right-turning traffic it is often treated as such with cars queuing in the bike lane (as well as in the bike box).

If you imagine it as a two lane situation you want to be in lane 2 because of the parked vehicles immediately the other side of the junction.

So I opted to stop where I’ve marked the red line on the StreetView capture: plum in the middle of the official single lane, and ever so slightly over the ASL.

Mr Pillock (that’s me being polite) in a blue VW Golf drives up the cycle lane and overtakes me on the inside and then pulls in front of me to stop in the bike box. With idiotic driving like that it’s hard to be scrupulously correct about never passing the ASL.

Needless to say it gained him nothing, I pulled away quicker than him. 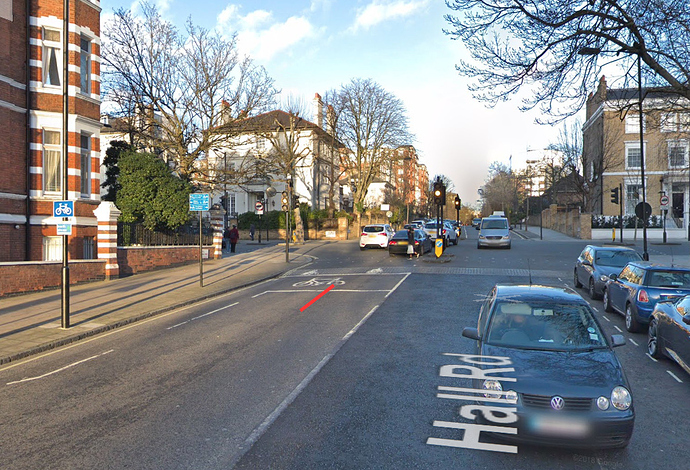 happens let them get on with it & look out for yourself