Anyone know the score regarding parking yer bike at Stansted.   Can find sfa online.

I parked the car at the meet and greet back in June/july and there was a bike parking area at the bottom of the car park. Nothing to chain a bike to as far as I could see but reasonably convenient for departures.

Not used it but found this

Travelling to Stansted Airport by motorcycle?

Motorcyclists receive a 50% discount on pre-book prices in the Orange Zone of our Short Stay car park and in Q zone of our Longstay car Park. To book your space call our contact centre on +44 0800 093 7851* (calls are free from landlines and mobiles).

Note it seems as if you just turn up without a pre-booked space you’ll be charged the full price.

Used to be free & right outside the terminal entrance for bikes. But As NT says it’s now pay to park.

I parked a couple of weeks ago for my trip to the Slovakiaring. I parked with loads of other bikes right by the Meet and Greet entrance. The good thing is there’s staff for the Meet and Greet right next to where you park. I stuck it on the pavement HERE. There’s even a railing to chain it to.

I’ve no idea if legit or not but I was fine. There was also bikes in all the chevron areas.

I see no motorcycles parked in that image. Our Nicks brave but not foolish

I’m going there on Thursday. If I have time before my flight I’ll check it out.

I'm going there on Thursday. If I have time before my flight I'll check it out. Pat


I see no motorcycles parked in that image. Our Nicks brave but not foolish ;-)
National Treasure

Or a new pic after ‘they’ raised the bar on security.

Not saying you made it up. What I am saying is airports are generally more security conscious with regard to randomly parked vehicles. That and the healthy revenue stream they get from airport parking, then there will be the Health & Safety brigade. We wouldn’t want anyone to come back and find their motorcycle impounded or having taken part in a controlled explosion exercise in the name of combating terrorism would we

Maybe you got lucky, seems to me a foolish thing to do or even suggest

Google earth image from 2017 shows bike parking there. Not sure if fee or paid for.
Street view image is from 2015.
Can’t work out how to add photo 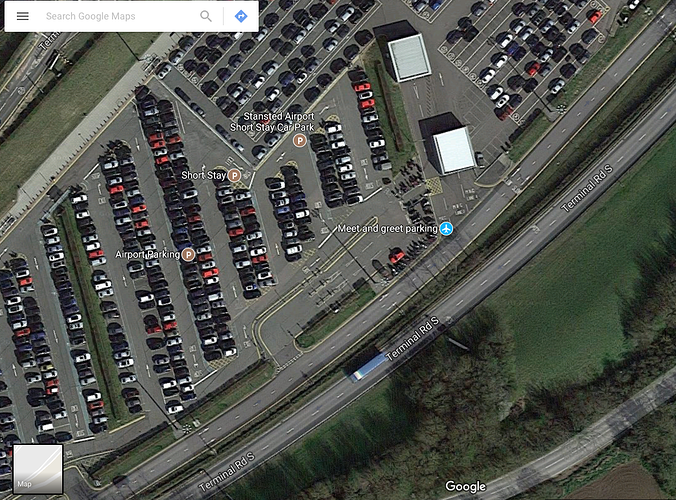 I parked at the meet ‘n’ greet earlier this year (feb?) for 5 days with no issues.

Look at all those bikes that got lucky LOL

OK, checked out the bike parking as shown in the pictures. There were 8 bikes parked up, all by the railings. I asked the guy doing the meet and greet about parking there & he told me there had been a lot more but they were carted away last week and he expected the same to probably happen to the ones there now as they were about to start installing more barriers/fences in the area.

I then went to the parking office and asked them. I was again told that the bikes there were cleared last week & taken to the long stay car park where the owners would be charged the normal turn up & park rate, less the 50% bike discount.

Doesn’t surprise me. Other than it being a schlepp for me to get to, Stansted wasn’t a bad airport. But they now seem to be trying to monetise every aspect of it. Big queues for security, as much space as possible filled with retailers so public space squeezed to a minimum. It’s madly expensive to drop off or pick up someone if you’re not aware of the little publicised free hour in the mid-term car park.

Cheers mate. All clear and un derstood. Much appreciated.

And cheers to others for posts and contributions.