Guys today there is several big protests in central London so if you’re using your bike then be prepared for a longer journey.
Roads should be back open for the evening rush hour.

I’ll personaly apologise for this also as I, and many cops are taking part in one of those protests.

The Goverment are pushing through reforms for YOUR Police Service at the moment - some of those reforms are good (in my opinion) but many are an absolute disgrace.
Included in this is the cutting of approx 16000 Police Officers from England and Wales.
At the moment there is in some places not enough front line Cops to respond to calls of help from the Public. We already have Police Control rooms calling victims of crime telling them that they have no one to send and this is going to get a lot worse.

Just wanted to explain one of the reasons why Cops are out marching before the Goverment lies and spin take over the media.
Just to make it clear, the above is my personal opinion only and not that of my employer before I get threatened with discipline from work!!!

i must say this morning on the A13 i saw around 30 traffic cops heading in as i headed out, good luck mr x

I was under the impression that serving policemen are banned from strike action by law?

Either way, I strongly support the need for more active police officers, and certainly not less - I hope it goes well for you today!

Mate, we are banned from striking by law. Every single cop out there today is on either a day off or has had to take a leave day to be there.

In 20 years service I have always believed that for us to be unable to strike is a good thing, that is changing though and due to what is being done to your Police Service there is now going to be a ballot for the Police to seek the same industrial rights as virtually every other job. A real sad state of affairs and it is going down hill.

I (like many other cops) am from a ‘Police Family’. My Grandfather and Uncle were Cops. I have a sister and 2 Brothers who are also cops. Would I recommend anyone to join up now - not in a million years. It’s soul destroying turning up to people who need help and knowing that the public are simply not getting the service that they should be.
In my 20 years in uniform, I have been shot at, held at gun point, fought with someone who had a knife who was trying to stab me, thought I would die in a car crash and I have also dealt with some unspeakable things that I can’t discuss that will live with me forever and still give me sleepless nights.
This is not unusal, most cops go through this and we are happy to do so knowing in the past that we will be treated well. Not any longer. We (like the public) have been lied to and enough is enough.

If the Banks are “too important to be allowed to fail” I reckon the same can be said oif your lot!

As above, no apology required Baz

I myself strongly support the action and the uk police force.

Would I recommend anyone to join up now - not in a million years.

My Dad retired from the police a few years back and this is exactly the advice he gave to my cousin who was considering joining recently.

Anyone who saw the (very) thin blue lines out risking life and limb during the riots and thinks that fewer police are required out on the streets obviously needs their head examining.

I wonder just how far the government will push this before they realise they don’t have that thin blue line between them and the masses.

I wonder just how far the government will push this before they realise they don’t have that thin blue line between them and the masses.

I doubt they are going to let that happen, judging from the sheer amount of police around Parliament yesterday. There appeared to be more plod than people when I went through in the morning…

Baz do what you need to do, though does this mean you won’t be on online for some COD action later?

Good luck. You are our police service and need backing. The gubbermint is just looking at the pennies, not at the actual need on the street (by Government I am not specifying Labour/Conservative etc…!!!)

First, I support your right to protest, but I do have this wicked thought. What you going to do if you get kettled?

Shall we all go down in our leathers and helmets and surround them and tell em, they’re just gonna have to wait… and ask them really pointy smug questions like, does your Mum know you’re out here making trouble? :hehe:

so… arey you saying there are a LOT of coppers in uniform rumbling around the town centre at the moment?

and Hels is off on holiday…

ok but you are the law are you going to turn yrself in?? anyway without the police the politicians are powerless so if you all stuck together and walked what could they do, wave there finger and say ok yr sacked to everyone one of you, them the politicians are not playing to the rules so why should you???

They would simply pick on another group who cannot strike. The armed forces.

We did let some vehicles through ! 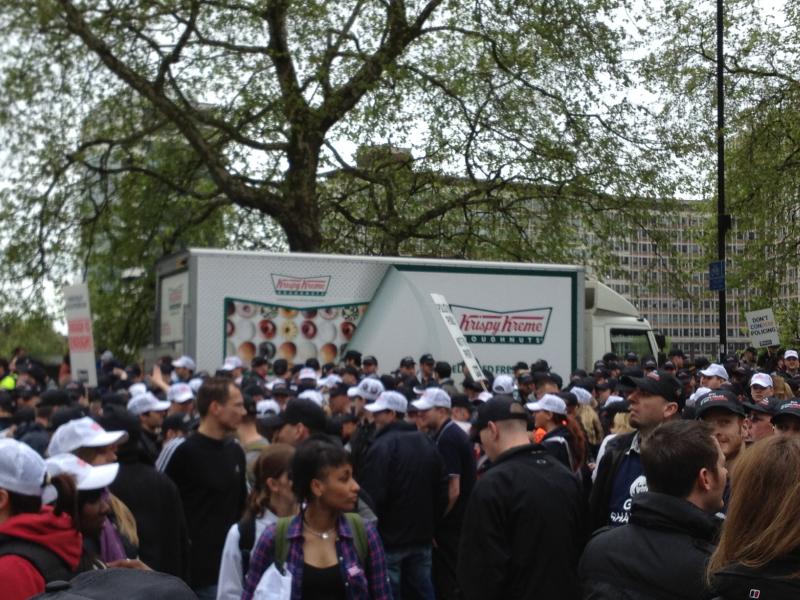 I wonder what Arthur Scargill would make of it all?