Anyone ever fitted Oxford HotGrips?

I eventually got the bar ends off, but how do you get the old rubber hand grips off? They are glued on I reckon. Do I rip them off with my bare hands and shour Gggrrrrrr as I’m doing it? Any tips?

When that’s done, there should be enough WD40 on the tube for you to just grab the grip, and pull/twist it off.

Putting the new grip on is nearly the same deal, squirt WD40 over the tube, and on the inside of the new grip (lots of it), then slide it on. The WD40 will evaporate and the grip will be stuck in place. I’ve done this dozens of times with race grips, though your heated grips will probably be a lot bulkier, and perhaps harder to get on the tube. With the race grips, I use a tea-towl when sliding the new grip on, otherwise you can blister your hands.

Thanks Jay. Not sure how long this will take. The kit comes with glue. Depending on how easy it looks to put the new grips on, I might use the glue, although if I b*gger it up I will be riding my bike tomorrow with metal bar ends LOL

Well boys and girls, I got the old grips off easily, using Jay’s handy tip with screwdriver and WD40 (which I managed to spray on my neighbours cat, accidentally I should add).

Once I dry fitted the grips, I noticed the throttle side was too long and meant when I put the grip bar end back on, it locked the throttle i.e. it stopped it automatically rolling off when you let go. This would have been dodgy. I hacksawed off a couple of millimetres (doesn’t look modified at all). Then, in my cold garage, once my torch died I went to the off license to buy some candles. I then decided to perform the surgery (the wiring stuff) outside the supermarket as there is a big light out there.

Eventually got everything ready and noticed when I put my steering lock on, due to the position of the hotgrip switch, it would switch itself on every time I locked the steering. Bad.

Aborted wiring till the weekend when I amn’t rushed and it won’t be so bleeding cold in the afternoon hopefully.

Cheers again everyone who added comments.

No biggie, I got em at the Brum NEC show last month for 35 squids, and served by a mega biker babe.

get a standard 4 pin relay, such as fog light relay from halfords etc

pin 85 on relay to battery negative

find a wire on bike that is only on (posative) with the ignition switched on,(easiest to find normally wiring on top of starter solenoid/ignition relay) splice into this “ignition feed” so that it is still joined together with your new wire attached, fit a fuse low rating (5 amps best) into new wire and attach to pin 86 on relay

now the grips will only work with the ignition on so they cant drain battery when you are away from bike, this is much better than wiring straight into ignition wiring as the grips will draw a large current if attached directly which can affect other electronics, using the relay still takes the main current direct from battery but could save embarrasment

Thanks mate, sounds like a job for an electrician

I either park in my garage or at the secure place at work so hopefully no potential g1t will walk past and switch the thing on. Will cover the controller box with a cloth or something.

If all else fails I could always trade in my FZ6 for a GS1200S that has hotgrips fitted for you :0 Nice.

I’d be down to a sparky too mate. No shame in it!!

Glad you got past the grip installation stage, GreatScott

Sometimes modifying your bike is never straight-forward! I’ve come across this situation quite a few times lately with my rebuilding efforts.

ok…stop being so bloody funny!

GreatScott, it’s not as difficult as it sounds. I done mine last week same way as Outoftowner describes (but went one step further and wired em so they can only work when the engine is actually running, not just ignition on).

Little diagram below should help you.

OR, you could always just connect the 2 wires from the hotgrips direct to your battery (but this will mean that the grips can be switched on when the key is not in the ignition, which could be a problem if you forget to switch them off, or if little scroats come along and switch them on for a laugh to flatten your battery).

OR, as you said, if you dont mind paying, get an auto-electrian to wire them in. 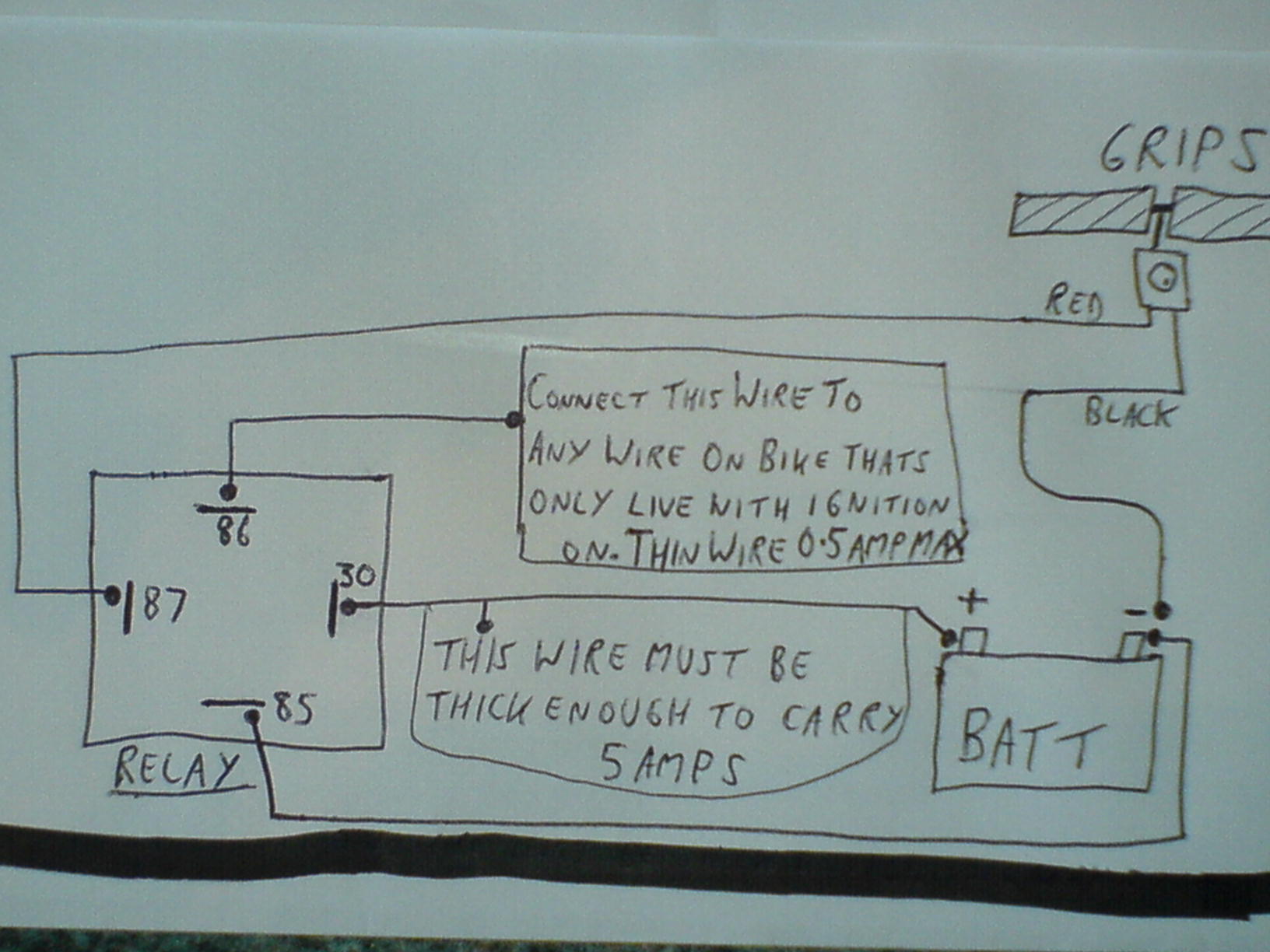 tonup… good diagram, you didn’t used to work for ERF trucks by any chance? looks just like one of their factory wiring diagrams

That diagrams straight out of the Ducati handbook mate

You’re not going to believe this, I burned me bl00dy glove since the integrated wire heat element thing has reared its ugly head and is sticking out of the rubber on the left grip. Unbelievable, after all that hastle.

I am gonna take them off and put on those Oxford mitts instead. Not sure what I can do with the faulty good though, since I bought them from the NEC bike show and not from a shop. Would Oxford refund me if I sent the kit back to them and explained that the metal stuck out and burnt my gloves?

The couriers manage with Oxford Mitts. That is the only way you get cold hands on the bike - the wind against your knuckles. Mitts should fix it. I don’t want to get an electrician and some scroat probably would sabotage it, or this scrote may accidentally leave the heat on.

What should I do with the faulty goods?

Just got a letter thought from Oxford saying that I have to urgently change my grips as they have a fault. Rang them up and asked if it could wait a while and I was told NO.

Probably explains why they get hotter the faster I ride

Buggers, are they going to change them for you?

Yer, but just spoken to BabyJ and he reckons that it’s not worth it unless I catch fire

That was after he eyed up my cigar.

This is possibly the best piece of advise I have had for fitting these grips. I have managed to flatten my battery twice

Also wired my autocom unit into the same circuit.

Just wanted to say thanks.

God I just passed out when I read those wiring instructions!