I have a single bike trailer

The bike’s front wheel (enduro) is too tall to fall in the gap between the trailer bars so the bike doesn’t hold itself up without being strapped down. It doesn’t have a wheel chock. How can one person load it and have it stay upright without it falling over just long enough to strap down? I’m sure there is a simpler way.

@me_groovy will be along shortly who will no doubt offer a selection of options for you!

Buy one of the chocks with the rocking cup the wheel sits in. Bolt down to the frame as necessary

My trailer has a flat base so can sit on a side stand while i faff with straps, but i lift it off of the stand to actually strap it down. Once you have one strap to the handle bars you can hang it from that while you attach the one the other side.

An option is to get the straps ready on the trailer, roll the bike on and attach one strap wihile holding the bike up, then tilt it away from that strap.

you could also put a plank down the trailer so your sidestand can sit on it (but dont strap down onto the stand, they can snap as i found at at 60mph)

I had the exact same trailer, OK my wheel used to fit in the hole but I never trusted it, so what I used to do was:
Pre populate the front tie downs with ratchet straps at the ready
Walk the bike up into position (either under power or push)
Still holding the bike walk around to the front
Still holding the bike, I used to keep the front wheel inbetween my knees (using them as a chock) bend down and pick up a strap
Do strap one fairly tight
You can then let the bike lean away from the strap whilst you pick up the second (keeping the bike in my knees for safety)
Do strap two 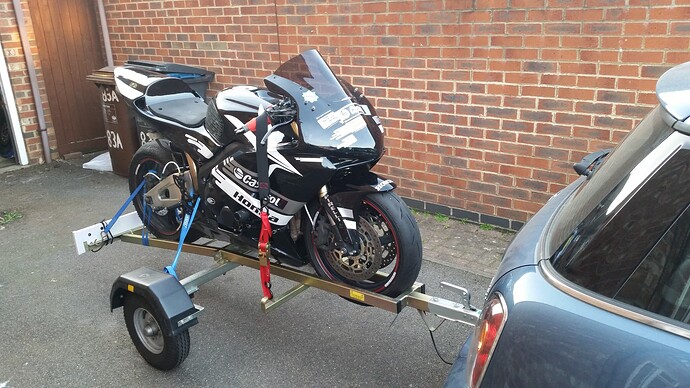 Cheers. @djmrmagic 's method (pre-populate) is kind of what the trailer people said.
I did see some chocks on Amazon @me_groovy , though I was thinking the bar ones But I figured the chock (assuming designed for a road bike) would be too wide. I was also going to cable tie it on, which I accept is not the smartest plan. Yes, plank for loading is a possibility @Boris sidestand would help.

I don’t like too much the way the light board just gets bungeed on. I thought it went under the little ledge at the back of the trailer, but yours is against the ledge at an angle. I’ll try that.

Yah the light board was a fucking pain, think in the end I put the light board on a plank of wood and used to rest that on the ledge, but still bungeed it on.
I thought about putting hinges on or something, but then bought a box trailer.

Used to drive like a twat, and had a few scary moments when the bike was at 45 degrees!

Yeah, discreet box trailer is probably the best option, if you don’t already have a van, and have somewhere to keep it. For me, ULEZ screwed the idea of a “cheap” van just for bikes and odd jobs.

For me, ULEZ screwed the idea of a “cheap” van just for bikes and odd jobs.

What do you call cheap? I was recently looking for a cheap ULEZ compliment ‘dirty diesel’ van and saw several 2016 transit type vans with 200,000+ miles on the clock and shoddy bodywork for less than £3,000. What turned me off was the additional expense of running a second, or in our case a fourth, vehicle.

For occasional use and not having to worry about the expenses of running or where to park another vehicle a trailer is ideal. Although there is an added cost on your motor vehicle insurance policy. Make sure your insurance covers you for towing a trailer and has a minimum of third party cover for anything you hit with the trailer and anything that falls off the trailer.

Or live near a van hire company

We do this, currently.

New car on order with a tow-hook though. Looking at two bike trailers. There’s a HUGE jump in price between open air trailers and box trailers. Wondering if it’s legal to take one of these and fabricate an enclosure for it. Wouldn’t be hard: 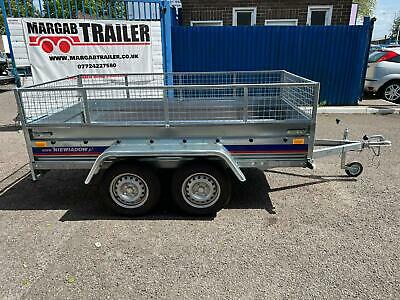 Saying that, these popped up as suggestions to the above, heh:

Fabric enclosure. Think it’s too narrow though for two bikes:

And a not terrible second hand box option:

I’ve used my dad’s box trailer a couple of times, and realized I prefer open

If you get one narrow enough to not need mirror extensors, then you can’t comfortably fit two bikes wide. They look like you can, but bikes are surprisingly wide.

As for legalities, you can largely do what you want so long as it’s secure and but protruding too far from the end

Would like enclosed so that we can leave the bikes and gear in there overnight at hotels when traveling away for trackdays. Would not feel very safe leaving two bikes on an open trailer at hotels. Might be okay, but the Londoner in me thinks they’ll attract unwanted attention.

Yeah, that’s the big attraction to them, and you can put leathers and tools in there.

How much will a box trailer affect range in an electric vehicle and what are towing capacities like.

Tesla need to make a self driving electric box trailer