dropped my helmet on hard floor

when i did my DAS training, my instructor said a helmet dropped from bike seat onto the hard ground would compromise the safety. I did exactly that, dropping my helmet on pebble stone, some paint fell off. This afternoon i went to Brombley Argos to buy a Box helmet(£40 only), an Oxford H belt and a pair of bone dry gloves. Here is my new Helmet beside the old one in bag:)
I wonder if i should ever use my old helmet again, if not, what a waste. 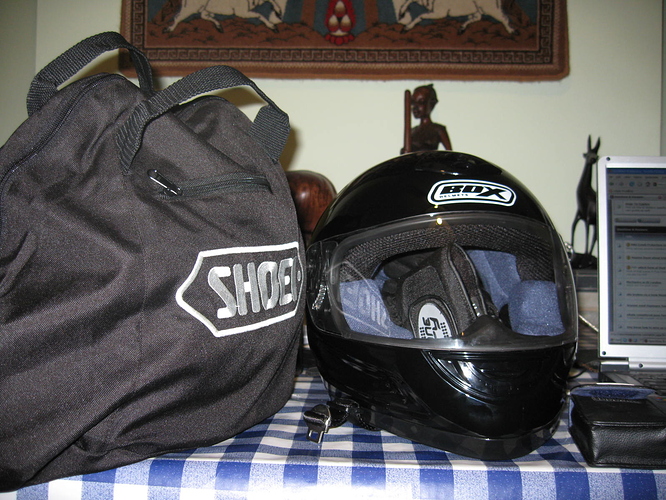 For those that do not have a helmet bag, if you search military surplus stores in the US of A you can often find them for $25-$35, and it will keep you from dropping your helmet, and dinging it.

Six military colours. http://www.actiongear.com/cgi-bin/tame.exe/military/level4.tam?M5COPY.ctx=7601&M5.ctx=7601 is one such emporium. what is that, about 11 pounds? That would pay for itself if it saved you helmets, and even more if by saving your helmet it saves your brain. There are other bags that will protect a helmet, and some are actually British (save it from a fate worse than death!), and probably you have similar stores here. Maybe yours don’t sell as much surplus as ours do, not my fault.

At the end of the day it’s your head but I’d have it tested or never use it… Better safe than sorry?

Personally, I’d rather a dropped Shoei on my head than any £40 helmet :w00t:

I would 2nd that one!

and a third from me!

drop the box in the bin mate

first time to hear a dropped helmet can be tested, thanks.

yesterday when i parked my bike in Bromley shopping mall, i was thinking about whether to pay the parking or not, then i forgot to took my bike key with me. after 30 mins in the mall and i returned to my bike, it was still there with the key! am I lucky or my bike is too ugly :w00t:

Arai’s can be sent off to be tested. Arai wont test another company. Shoei said they would test it, but it would involve taking it apart, thus leaving it useless anyway!

I dropped my shoei and I wouldnt trust it now, however a box? hmm.

Unfortunately, for you, id say get a new lid

and gain an expensive ornament!

Your instructor has to say that. I bet the school he works for don’t bin every helmet that has been dropped by students though. Shoei would tell you to buy a new one because… well of course they would, wouldn’t they.

Personally, I would like to think that something made to protect your skull from major trauma would not be rendered useless by a fall from about 100cm. I remember some independent tests done a while ago, about the the time we swapped from the old BS kitemark blue/green stickers, to the inferior (my opinion) ECE 22:05. They dropped helmets from a far greater height than 100cm and they were still able to do the job for which they were intended.

Your choice, but like others have said I reckon I would rather have Shoei than the Box. Even if it has been dropped.

ok we teach if you drop a helmet then bin it…

why: the outer layer can dent in then bounce back to origional shape however the inner compressed poly foam area can still be pushed inwards leaving a gap in the prtective layer ( a bit like the air sac in an egg).we have had a helmet dropped on training and I cut it in half to see the damage and there was a definate gap between outer and inner layers which we now show to students

also there may just be a hairline fracture in the outer layer which in the event of another serious colision at speed could cause the helmet to then split.

It’s up to you at the end of the day but safety has to rule your head and peice of mind.

I crashed in my Arai 3 times (the last quite heavily) and each time sent it off (via Hein Gerike) and each tim,e it came back saying that, apart from superficial paint damage (the bad scrapes and scuffs), the helmet was deemed safe to use. Retired it last year after 5 well served years and around 100,000 miles on my head.

A work colleague placed his Aria on the seat of his bike and, yes, it fell off, causing a few little chips to the paint on the side. As the service is free, and piece of mind is all, he sent his off, only to get it back, saying that it should not be used. When you looked at his compared to mine, you would not have guessed his had been consigned to the scrap bin.

And lets not start the old “Is a £40 helmet any worse than a £500 one?” discussion, pleeeaaassseeee

Personally, I’d rather a dropped Shoei on my head than any £40 helmet :w00t:

Absolutely! I dropped my helemt countless times and when I crashed at brands my head bounced on the gravel alot and the helmet still did its job, I have decided to get a new one after that. I guess its worth having it tested although I cant imagine HOW they would test it. IF you dropped the £40 helmet i would say dash it way BUT the shoei is made of stronger stuff. HOWEVER (disclaimer) I agree that is a helmet is dropped it should be replaced.

The chipped Shoei will be fine. My Arai has rolled onto the floor several times, falling from seat height and it’s fine. I’m gutted that the paintwork is spoiled, but the shell will not crack from that distance and the inside foam will not be compromised.

Ditch the Box helmet though.

A far as I understand, the helmets get x-rayed to see what sort of damage has been done.

I would still say that it’s better to be wearing the dropped Arai/ Shoei rather than a £40 box!

Crashed in my Shoei at Brands and still wearing it…

I know I should replace it, but I figure that I mostly slid with my face in the gravel so there wasn’t an impact as such.

The helmets worth more than my bonce anyway

I’ve only been riding just over 2 yrs and my first helmet, Aria, was written off by the accident I had…took about 3 layers off it.

Anyway, all testers, trainers, etc are told to tell you that info…that if you drop a helmet its obsolete…however, in the old days, if a helmet was dropped, scrapped etc about 4 times…amount of bsa stickers on it…then it was no good anymore and had to be scraped. However, lets not forget that helmets are a lot better made these days and can with stand a bomb!

When I came off my divvy 6 and ruined my Arai, I bought a new helmet and threw the Arai. Why? Cos I’d taken about 3-4 layers off the front part near the chin and thought it was better to get a new one. It really depends on the trauma, damage etc to the helmet. Just dropping it once, is less likely to cause any more damage to it like scrapping across the gravel at 30mph.

But as mentioned before, its all down to your head and whether you’re happy to accept the possibility of a replacement or put up with the original!! At the end of the day…don’t be forced into buying an over expensive lid…most of em are of a high quality…they need to be if they wanna be sold on the UK market!

I think after a minor drop it would still be safe. The main thing is the compression of the lining. A little chip on the paint will not case the helmet to split in half.

All this talk about prices etc… surely if it has the standard markings it should be fairly safe during ‘standard’ use ?

I dropped my Arai and HG offered to have it tested, it was due for replacement anyway, so decided to keep it for track days only…one less thing to worry about breaking…:w00t: