I had an off a couple of weeks ago (car pulled out) and have just got the cheque through from the insurance.

So, its time to look for another bike.

I want it just for commuting (short 10 mile in town run). I want it fun and reliable and something that can deal with speed bumps and rough roads

The XT would be at the higher end of my budget.

The MZ I like but the CCM is lighter.

I’ve read around the reviews for these bikes and visited a few forums, just wanted to hear from anyone on here whose got/had one and what they think.

I’m after a road moto so not a supermoto !

CCMs have a kind of difficult reputation and are a bit vibey but I like 'em. I had an 604RS (old Rotax engine) and I loved mine - liked the R30 since it came out - different and British. If you’re only looking at short runs and not to much refinement why not?

I had an MZ Baghira SM for a year before some scrote in Woolwich “liberated” it. Absolutely loved it. Probably better than the XT for short journeys and so much FUN.

I’ve two mates with MZ’s and they are both suffering from grin fatigue.

A bit ugly but the Mastiff is a more practical bike than the Baghira but either way there are things that need changing, notably the seat, unless you’re an iron arse. Then the can. The original weighs err “a bit”.

And that’s about it. All the rest is quality throughout, ignoring the agricultural, but very decent, frame. Just got to fimnd a good one.

I always wanted an XT which I may still get and I too looked at the otehr but frankly you want a bike that you can get parts for on ebay:)) not something you will find it hard to get hold of. MZ seemed really ncice and they seemed cheaper than the XT… has good reviews too. I wouldn’t bother with a CCM stuff starts to melt down on it… bad wiring, display goes etc etc but they are fun to ride too.

You want reliable bike go for the Yamaha… big name, the MZ is pretty much the Yamaha but it is a chinese copy me thinks.

A friend at a previous job have the xt660x, he loved it. Managed to trash a set of tyres within 800 miles.

Having had both a Baggie and a CCM, I would go with the Baggie, excellent engine, powerfull brakes, just get rid of the realy heavy standard exhaust. The engine is very tuneable too. Spent £2000 on mine, then some scrote stole it, used it to rob a perfume store and stacked it, writting it off. Couldn’t even get the engine back. and of course they didn’t value it with the £2000 I spent on tuning.

CCM is lighter mine had the Suzuki engine, but a little less comfotable.

Cool, Thats exactly the kind of advice I was looking for!

Andrei The MZ was built in Germany mainly from bought in parts from some of the best manufacturers. Whitepower rear suspension, Grimeca forks, Acerbis plastics, Grimeca/Brembo brakes. Basically, a high end kit bike.

That’s why they went bust and got bought up by a Malaysian who, as far as I know, has done s*d all with the company except sell the old two stroke rights to a couple of German guys who plan to start production of the old race bikes. (They say.)

The engines are Yamaha XT (strangely built in Italy, by a company owned by Kawasaki, and also sold to Derby and Aprilia) Spares for that and the electrics, brakes, suspension, drive chain, fuel system and so on are dead easy to get. The only difficult stuff to get are the plastics and the only really expensive stuff is the electrics.

The XT is nice but, ignoring the slightly curious looks, I think the MZ is the better bike. Lord does it need a gel pad seat though!

I have had both XT660X and a CCM R30 , YOU WILL FIND THE ccm IS LIGHTER ,better brakes and unless you do some mods ,exhaust ,filter and a rejet , it will feel under powered compared to the XT , the XT on the other hand is very torqey, more stable because of its weight and better on the motorways if you have to , fuel range is better as the CCM has a tiny tank,the engine is also smoother, if i had the choice again it would be the XT (had 5 in one form or another).One thing to check for on the CCM is that the base gasket has been upgraded with the metal version rather that the crappy paper one .

Went to see a MZ Baghira on Sunday morning.

One of the lowered ones. Really nice.

Put a bid in with the intension to bid more later on if needed and missed it.

The winner was a bit crafty and stayed out of the bidding until the last 3-5 mins.

3 - 5 minutes last minutes? You’re handing it to the competition on a plate.

Either be all queued up ready to press “send” during the dying seconds or buy an aftermarket programme that will do it for you.

Remember you can put in a ball breaking bid but ebay will only take that bit of the bid that is needed to secure the win. It’s just a case of getting the bid in before the end but so close that the competition don’t have a chance to respond.

(Well. not unless they have the same or better aftermarket programme. I investigated these things a few years back and discovered that I already owned “Liz” (Mrs. O.) Rarely beaten.

Not that I’ve owned any of these, but have you also thought about a Suzuki DRZ400?

I’d go for a drz400 sm but the MZ can be had for much less and its a solid bike.

After sitting on one the other day I’m pretty much set on one.

Saying that I’ve not sat on a CCM yet.

I learned that on eBay too so what I do now is palce a bit just to have it in my list and then before 30 seconds I put whatever I believe I will pay the MAX on that item that way last minute bidders will not have a chance since they will only go up by a little bit.

If someone goes over my max bid then good on them… I found eBay to be really weird. People pay more for items on eBay than shopping around. I found things cheaper on Amazon than eBay. I swear for some people bidding it is like a game… they have to win by all means. I was watching a Xbox game and the bidding went crazy, 2nd hand game ended buying it on Amazon for about £5 cheaper… also bidding sometime stops at £0.50 or £2 less than buying it new from teh shop so I just go to the shop and pay a little more.

I only look on eBay for bargains. For example I had replaced my fork seals at Ralphs and he used cheap not Yamaha originals. Replacing both seals was £90 at the time. Seals went 1 year later so I went on eBay and got msyelf a set of Forks for £70 and fitted them myself. I have a spare set of forks which I can sell… or keep just in case.

If you ever want to test ride my DRZ then you’re more than welcome mate.
The DRZ’s lighter than all 3 of them and will also be more agile for filtering bad traffic.
Will do 50mpg no matter how hard you thrash it.

If you do (somehow) manage to brake anything in a drop or crash the repair costs will be minimal because parts are so cheap & widely available on eBay.

Managed to find an MZ Baghira not to far away, very clean and original. Sniped it at the last minute!

No tax or MOT so having to cart it back :rolleyes:

Anyway here she is 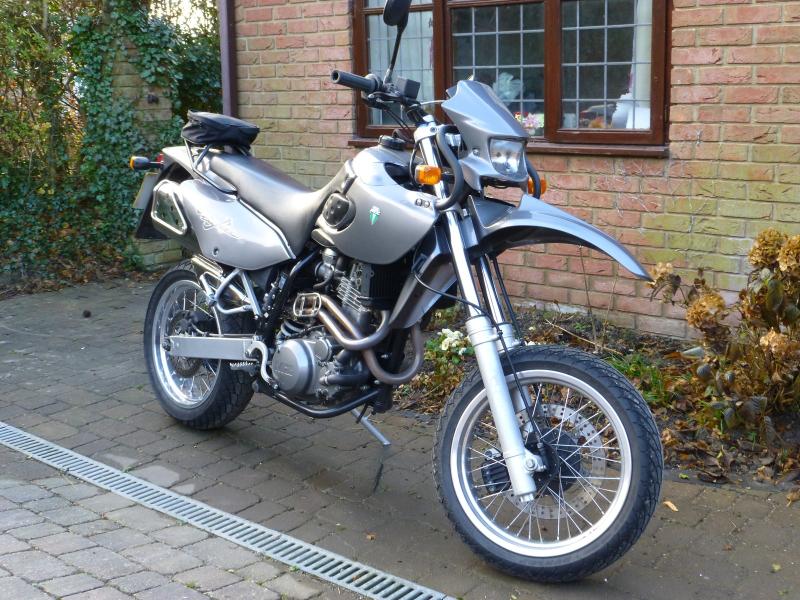 Looks nice…welcome to the offroading club