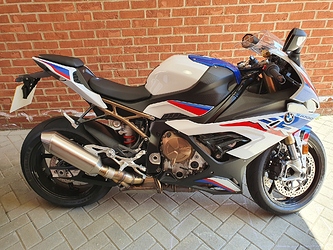 OK so I finally got around to testing the 2020 BMW S1000RR and to say the least I was not blown away, at least not enough to part with my cash. I was a bit nervous as I have never ridden a 1 litre and all the reviews of the bike describe it as more than capable. They let me ride the m sport which is the top spec of the lot.

So firstly compared to my gixxer it is a physically bigger bike. I am 5ft 9 and at stand still I am on my toes, as compared to completly flat footed on the gixxer. However with one foot down at say traffic lights, the slight lean allows my foot to be flat which is still good. The geometry feels more upright, so even more naturally off my wrist. One of the reasons I chose the gixxer over the CBR, Daytona and R6 its because it was the least wrist hand stand bike, so this is a +++ for me. I also felt I was sat on the bike as opposed to in the bike so better field of vision when on the road +++

Out the showroom immediately you notice the dynamic dampening control suspension, ok yeah that was really good. With road mode selected you feel like you riding on air and that is another ++ for the long rides. You just float along lie a fairy after a spliff

Electronics: lots and lots of options but my personal opinion is that its like a new phone, first month you are blown away with it, then you just leave it with the default settings cause all else is just faff. So didn’t really let it influence my decision. One thing that is pleasant is the quick shifter just need to get accustomed to the spring feel when shifting down as the leaver still moves down a bit when in first, but i recon it will come into its own on the track.

Started off in road mode as recommended by the dealer, nice and easy did an overtake in second gear for the revs, mid way through the rev limiter kicks in. I thought ok that cannot be right. Continued along making progress then it happens in 3rd gear again. I thought ok must just be me , never rode a 1litre before and I am accustomed to the revs and sound of my bike so I know when to shift.

The rest of the ride I just keept short shifting to avoid it happening again, which made for a really boring ride. A few times under engine braking it was a bit jerky, but i put that down to my heavy hand on the the throttle. It’s really light as opposed to the gixxer where you have gotta choke that chicken for it to move. I guess that is what fly by wire feels like.

Got back not impressed to part with my cash for next to no difference, and the sales guy is like yeah thats expected, before the first 600 mile service the bike revs are limited to allow it to break in

. Seriously why would you give a rev limited sport bike to test.

Anyways they did say they are happy to rack up the miles do the first service and set it to beast mode. Then they happy to give it to me for a weekend to have a proper go, which is a really really generous thing. If that addresses the power issue then they might convince me to part with my cash.

I must admit there was a certain satisfaction getting back on my bike. 5 years with the same bike you know every bit of it.

Any RR owners out there, whats your take ??

I’ve ridden a couple of them and found then soulless - don’t get me wrong, they are super fast but most of that is unusable on the road.
The suspension I thought is good and smooth but it did feel a bit disconnected from the road.

Yeah i can see what you mean by soulless, but i guess that is to be expected with more and more tech dumped into bikes and this thing has more than my car.

I’ve heard from lots of people riding them and finding them without a feel or soul. Go buy an RSV4!

I sold my S1000RR as it was quite bland (some say soulless). Bought an RSV4 Factory instead. That was a dream bike. What a machine! MotoGP bike for the road.

I was expecting to be scared of a bike with far more power and speed potential compared to the 990. But it does exactly what you want, when you want. It was clinical, doing 60mph in 2nd, turning precisely. The SMT was and is far more fun. I like a bike that says fuck you every now and again.

I have never really paid attention to Aprilla so don’t know much about them. They are so scarce, kinda makes me think no one buys them, but sounds like it’s worth a look.

Not ready to jump the S1000RR ship yet, keen to see what it rides like after the service.

@Kevsta I kinda like the fact it does want you tell it that was a defo plus for me. However they got me back in to try the S1000R and Nuff respect to all super naked riders that thing was different.

Accelerate hard and you have got to hold on for dear life, break hard and it feels like the rear is gonna come up and throw you over the bars. I was actually a bit scared on it. It feels like it wants you to rough it up all the time. Probably given time I can get accustomed to it but as a second bike not a main one. Also if your making progress every gear change is a slap in the back, I guess that’s what the extra horse power gives. On the gixxer only 2nd to 3rd slaps, after that it pulls really nicely.

Those are the ones I’ve owned. Ridden multiple amounts more due to LB editorial, loaners and other experiences.

I have never really paid attention to Aprilla so don’t know much about them. They are so scarce, kinda makes me think no one buys them, but sounds like it’s worth a look.

I looked at the Aprilla Tuono, if it had a slightly better fuel range I would have bought one. Cracking bike.
I bought a Speed Triple instead, for me super fun to ride and sounds great.

I’m currently on an MT-07. It’s my first bike, had it for just over a year. It’s fun, but doesn’t quite light me up. The closest I get is when I’m in the twisties and lean into the bike, kinda taking a sporty stance.

Because of that I’ve been thinking my next bike should be a sport bike and after seeing MCN give the S1000RR a great review,, especially calling out that its very comfortable and great as a main bike, I thought that could be the one!

However, it has way more than can be used on the road, so if it’s not frequenting the track it feels like a waste perhaps? It’s a shame the R6 is the only modern day sport bike left under 800cc.

I’m yet to test drive it. Making a list:

I did test ride the GSXR1000R at Motorcycle Live last year. Was a bit nervous, but was pleasantly surprised at how smooth of a ride it was and how much control I felt over the bike. Loved the stance. Shame that I just don’t love the way it looks

I’ve wondered this too

It’s a shame Suzuki don’t make the 750 anymore, it was a good mix of power and weight.

Have you looked at the new Street Triple 765? Not a fully faired sports bike but has a similar riding style.

should you also add Claire’s bikes to the list?

OK so that makes all the sense in the world. I went to suzuki’s site to have a look this years 750 and there was none. Didn’t understand why, I have thought of just keeping my bike as a track bike and just get another, it is hands down a sweet bike to ride cannot fault it, but can’t justify that cost and 2 bikes. Also I only do 1 track day per month.

@nivag no i haven’t looked at the street tripple not sure I want to go down in power. Also I think it will do me just like the BMW S1000R accelerate and need to hold on for life or it will wheelie, brake hard and over the handle bars I go

. If I could get over that feeling and learn to ride a naked probably I will defo consider it but not the triumph, that thing is ugly as sin

Next on the list is the Panigale V2, yes yes a big part is cause it looks like a super model. but on paper the power is only a bit more than the gixxer, not the arse rocket like the V4

and it has all the safety electronics

. Only down side is maintenance issues that most reviews seem to mention.

Too heavy. They weigh as much as a litre bike.

Next on the list is the Panigale V2, yes yes a big part is cause it looks like a super model. but on paper the power is only a bit more than the gixxer, not the arse rocket like the V4

and it has all the safety electronics

. Only down side is maintenance issues that most reviews seem to mention.

Nice, I’m infatuated with the V2, looks awesome by all accounts. Amazing on track it seems. Would love one as a track bike. What maintenance issues are you referring to? I thought modern Ducati’s were pretty solid.

Nothing in particular just that they break down alot and it costs and arm and leg to fix. Some time back spoke to my garage also and they said you just need to pamper it a bit more, ensure you service on time every time kinda thing.

I saw the new 2020 model S1000RR outside Bikestop in Steveange yesterday. I really two changes they made to it: The new rear end, as previously it looked like to big fragile bullets sticking out behind the pillion seat; and the dark coloured swing arm, as I didn’t like the plain metal coloured one previously.

Try a ZX-10R if your after a sports bike. Just make sure you get it above 10k rpm with the throttle wide open, because that’s when they really start to breathe.

I’ve been riding Ducatis since 1995 - never had a breakdown.