Anyone up for bike thief baiting?

Anyone up for bike thief baiting?

Was thinking that this morning reading about yer man’s two bikes and van going awol.

I always thought it’d be nice to put some scrote in the back of a van, drive to Exmoor - take all there money and phone and leave them to get home by their own devices!

End of the day you have to leave these things to the old bill…but nice to dream about what you might do!

You would probs end up in court, unfortunately ;[

We should club together, buy a desirable 09 sportsbike, stuff it full of state of the art trackers and just park it up in obvious central London locations. Whenever it moves unexpectedly, just get straight onto the old bill with the current location.

If we could get a thief a month we could be onto something.

You would probs end up in court, unfortunately ;[

If it is discussed on a forum, yes.

The idea of fitting the bike with trackets and calling the old bill could work. Thats not illegal, unless it is on some technicality.

i thought it was illegal to put something there with the purpose of attracting someone to steal it.

entrapment is not illegal… Well not yet at least but it might be soon if they think that jail are over crowded again!!!

Really? You could be right. It probably should be illegal really, could cause all sorts of problems. I guess its technically entrapment. Could be fun though

just as long as you dont live half way across england:D

Anyone up for bike thief baiting ?

You mean beating I guess?

My initial thought was beating the crap out of them, but i like the tracker idea.I think after a couple of gangs were caught then others may not be so keen,wondering if the bike they are nicking is a baited one! I dont see why insurance companys should’nt finance this.

The police have car parks full of stolen/recovered motorcycles. Surely they could be used as bait and I would think a company like Tracker might even ‘sponsor’ the operation as it would be great press/marketing for them.

Maybe someone with the correct experience could put it forward to a tracker company? Anyone have any contacts?

The police have car parks full of stolen/recovered motorcycles. Surely they could be used as bait and I would think a company like Tracker might even ‘sponsor’ the operation as it would be great press/marketing for them.

ISTR that the Met now have a number of trackered up bikes that they use for this very purpose, I’m sure there was a thread on here a few months ago about it.

I put my RR up for this very purpose a few years back on hear but it never happened.

well im up for it, i promise you if lots of bikers club together and start a “bike Watch” club we would get sponsorship from bike company’s alarm companies and maybe even the councils, not to mention donations from other bikers.

We could even do fundraisers at thing like the birmingham nec, or dontations fro organised ride outs.

It would have to be thought out properly but it could work. And the gangs would just back off if they though that bikers where clubbing together to catch them.

However the old school idea of a baseball bat covered in foam, bundling somone into the back of a van, making them strip naked and then dig a grave in the middle of nowhere so that think its the end. Then leaving them to walk home starkers and think about how close to the end they just came and how much nicking bikes is a bad idea. This is appealling but will end up with us getting in trouble but a little peace of me would love to do it.

However if anyone else on here is serious about organising something like a “BIKE WATCH” club then i think we should actually meet and through some ideas around about how to go forward. We could sart off by targeting bike hot spots. I reckon with some patience and some cunning we would catch at least 1 person every week.

I would put money into a scheme like this.

We have to fight back against this scum.

We need to start dealing out pain, upset expense, and inconvenience rather than being always on the recieving end of it.

London is not the proper functioning international capital it markets itself as if people are having to park their motorcycles/bicycles and wondering if they will be there when they get back.

Either catch the thieves or councils should make proper secure provision in the form of secure parking for those of us who contribute to the capital’s economy and ease it’s congestion by going to and from work on two wheels.

Catch/scare away the thieving scum.

provide us with secure/monitored parking to make it hard/impossible to steal our expensive, valuable and essential property.

I may be barking up the wrong tree here but.

Does any body remember seeing signs on lampposts to the effect that there is a police placed bait car in the area, dont try nicking any boyo cos you might get the police one.

A huge petition to extend the scheme may seem like a limp idea but it may work. The police already have the infrastructure in place if they do infact do this rather than just putting the signs up as a detterant and then not doing anything. 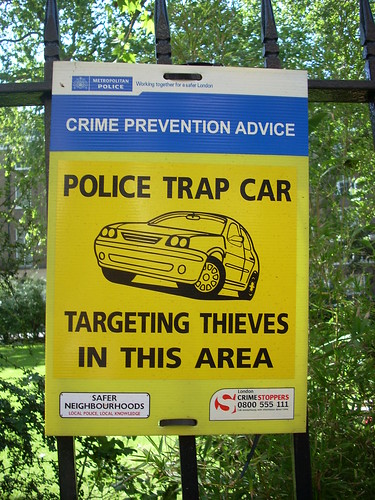