Saturday night they nicked my front panel from my honda ps125,they also took cover for spark plug.I think they were trying to hot wire it.,but why would you do it in my front garden when the bike is still chained to ground anchor? or maybe some crackhead want that plastic only.?,no idea
Last night they tried again.This time they were playing with my lock,they took plastic cup from my lock.
I don’t know what to do,l got new bike cover maybe that will help

Any ideas what to do? 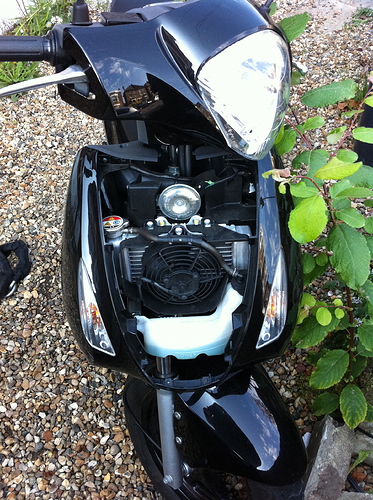 Bring it inside or get a dog.

Have you got an Almax chain? might be time to invest in one

I cant ride it upstairs to the 1st floor,maybe when l get drunk

Forget the Abus. Get an almax, ground anchor, decent disc alarm and a cover and you just might keep your bike a bit longer.

Use the cover, get an alarmed disk lock or fit a cheap alarm £20 you can get them for. The alarm sound should deter them and also let you know when they’re going at it

Thank you guys,l got the cover yesterday, I think l need to get alarmed disc lock.
Any recommendation for disc lock?

Xena do a good range… can’t remember the exact model ppl recommended but think there was a thread in Products and Upgrades section?

Park it somewhere else, at least for a few days till they move on to the next bike.

order yourself a new baseball bat of ebay and get yourself a cctv unit so next time you can beat them to a pulp thieving bastards.

There is more guys,
I parked it outside of work in Crystal Palace today and some f… moron run it over .Now l got scratch on left side and broken brake lever .
I gave up.

(l got baseball bat though)

If you pm Kaos he might lend you his gazebo.

The Oxford Stormex covers have locking loops on the front and back so you can lock it down to the bike. It’s pretty thick material so getting it off will be a right ball ache so hopefully they will move on to something else. Someone had a go at my cover once. Not sure whether it was the traffic wardens trying to see if it had a permit or a tramp looking for some bedding. They managed to rip it a bit but it didn’t give way.

There is an Oxford Alarm disc lock which is pretty good. Oh and if you buy a baseball bat make sure you get a baseball too and take that with you. I think that will improve your legal position for carrying it round. Your obviouly just going for a game of baseball and not going to clobber someone.

I find a Big baseball bat might help every now and then and some hydrated lime lol.

If you pm Kaos he might lend you his gazebo.

He hasn’t got the gazebo, you’ll have to ask Jay for permission and andyp69 to get it out of storage :D:D:P