Anyone used Viton sheet before?

After using sealant on my tuono’s tank, it leaked again as soon as the heat picked up. Someone’s suggested using Viton rubber sheet instead of sealant. has anyone got any experience of this?

VITON RUBBER SHEET GRADE A (VINYLIDENE FLUORIDE HEXAFLUROPROPYLENE). (tolerances on sheet vary from 0.1mm-0.3mm depending on thickness). SUITABLE FOR AUTOMTIVE ,AVIATION FUELS AND MANY CHEMICALS.

What was the sealant that failed?

My weapon of choice would be Hylomar Blue

I needed something that was a sealant but also an adhesive to stick the plate to the tank.
https://smile.amazon.co.uk/gp/product/B001U7EJVS

So the problem is the plastic flange has warped. If it was my problem I’d make up a flange gasket a tad thicker than the warping and fit with Hylomar blue on both faces.

Lots of info on Vitron rubber at https://www.deltarubber.co.uk/viton-rubber-sheet

No it’s the plastic of the tank itself. This is the gap between the pump and tank before I made the plate. That’s the gap I tried to fill with the sealant.

Want to know more about mouldable glue? Check out the answers to our FAQs to find out how Sugru can help with your next repair, DIY or craft project.


Sugru, like most silicones, is not highly resistant to oils and petrochemicals, as they tend to allow ingress into the material causing it to swell and become soft and less durable, with the potential for particles or residue to release into the fuel.

Sugru may also swell in some solvents and oils, as well as some strong acids and bases. This kind of swelling may affect some of Sugru’s properties such as its strength and adhesion.

Not the Kevin Costner film, but what about JB Water Weld Epoxy Putty? https://amzn.to/2XeOpUo

I’ve just used some to fix a crack on my KTM’s front tanks. I’ll know in the morning if it’s actually fuel proof 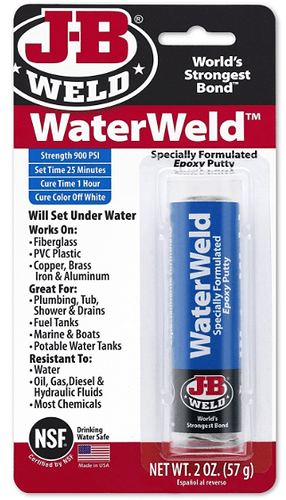 Did not know that… Glad someone reads the instructions!

Discussed this with some knowledgable folk this weekend and the question raised was “would you get sufficient compression from the Viton rubber to seal the gaps with 7 Nm torque on the bolts”?

Also discussed was to fabricate a metal plate and bond it inside the tank, tapping the bolt holes so that you can create a sandwich of plate, tank flange, pump.

Worthy ideas.
The threads the bolts screw into are embedded in the skin of the tank so if they’re overtorqued it’ll literally tear a hole in the bottom of the tank.

I have considered putting some sort of plate inside the tank to clamp it down to but that won’t affect the flex in the lip. Can’t do anything with the lip itself as the pump has to fit in that hole. Nivag’s just repaired a hole in his KTM tank but that was a hard putty, this requires some sort of flex and movement with heat fluctuations. Especially as it sits millimetres from the rear rocker cover.

I think NT could have a good point about the lack of compressibility of Viton. I remember using some at work years ago and it was pretty hard.

Thanks, that’s exactly what I needed to know.

Other than Hylomar blue I don’t know of any sealants that specifically claim to be fuel resistant, most only claiming to be oil resistant. The best RTV sealant I’ve used (car sump no gasket or seal) is Loctite SI 5980 flange sealant, £7 gets you a large 131g tube off the shelf at Halfords. its specifically designed for adhesive strength, large gaps, good oil resistance and the ability to withstand joint movement. Everything you’re looking for save for the fuel resistance.

I have half a tube here so I’ll test it to see what effect petrol has on it.

Check out Apriliaforum.com . JBW has been used and lasted a few years. Another guy has used PGG Aerospace P/S890 class B -2 tank sealant. Seemingly it can take some temp and has some flex.
A guy called RAS has used JBW,a plate and viton 1/22” .
I guess your tank is nylon and susceptible to ethanol swelling.

I’ve got a KTM with a nylon tank. Always use super when I can. It’s not the ethanol that’s the issue, my understanding is it is the water that the ethanol allows to be dissolved into the petrol.

Super currently doesn’t have ethanol added to it.

Exactly right Squishbang. Problem mostly lies in it was stood outdoors for 2 years with an almost empty tank.