Anyone use a camera on their bike?

Does anyone use a camera set up on there bike/helmet?

I am currently running a base model GOOKAM(unsure what model exactly).

It is set up on a mount attached to my handlebars. Can be swivelled easily.

Quality is good for the price paid. Does the job basically.

The battery does not last very long. However, it does come with a spare battery and a charger docking for the two batteries to be charged together. The battery can be charged directly in the camera as well. Overall rating for this camera would honestly be mid range at 5/10. You get what you pay for.

It depends on what you want to use it for but…

I use a Drift Ghost X with the long life battery pack It is attached to the side of the helmet. It sticks out a bit but has not been a problem. The only downside, as with any such mounted camera, is that you get the edge of the helmet in shot.

As I use it on 720p30 mode I cannot say how good the video quality can be to to say whether that justifies the cost (£130). But with the battery pack (£25) it means I can ride all day (8 hours) without having to do anything to change or charge the battery.

And for me that is worth it. I used to have a handlebar mounted SJCAM SJ4000, and needing to change batteries every two hours was a nuisance. I did try drilling a hole in the case to be able to use USB power and the vibrations ripped the socket from its circuit board!

I use the lower quality mode just for smaller file sizes, as I dump the videos onto a hard disk and, for the most part, forget about them. But it means I can watch bits back later if there is anything I want to review (in my riding on something else that happened). I also find them quite helpful to watch when I cannot sleep! Which is fair. And having not been on my bike in some time, they are now the closest I can get to riding.

The wind noise is, as with most cameras, quite bad. But I bought some sticky windshield things that you can use to cover the microphone holes and they make a huge difference.

The Ghost XL is £150 and is fully waterproof and claims 9 hours at 1080p sso I would look at that if I was buying now.

I’ve just fitted (October) a Bluekysea DV988 motorcycle dash cam system. For £110 plus £20 for a 128Gb SD card that gets me 16 hours of video recording. It comes with front and rear 140° 1080P 30fps cameras, all the wiring, built in GPS, G sensor etc. So far so good it does what it says on the box. The video quality is OK for the purpose of identifying who did what to who. Gone up in price since my purchase. 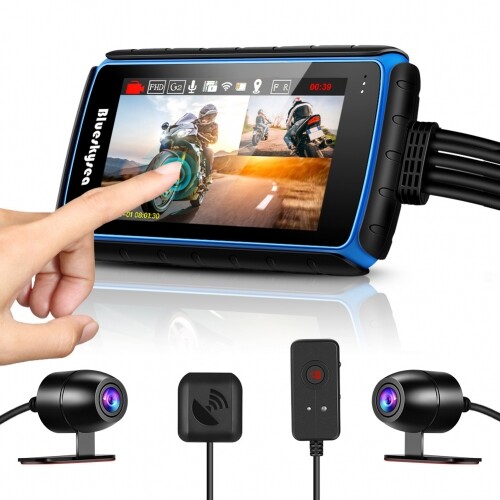 DV988 comes with a big 4 inches touchscreen. Easy to use it as a rear mirror for the motorcycle riders! Full Waterproof design and Decent video footage quality make it one of the best motorcycle dashcams of the 2020 year.

I would say be clear on what you want to achieve with it.

The camera requirements for recording a few minutes of action on a track, or your favourite curves; for recording a piece to camera for your blog or YouTube channel; and for recording evidence for the Coroner’s Court (sorry) are all very different.

Does it function as a rearview mirror? That might be useful for my bike which currently gives me a nice view of my elbows.

How did you find installing this set up? I am looking in to purchasing one.

Ive got a rear view camera in the car (aftermarket) and because its filming a large area it really not got enough detail to replace a mirror.

@Michael748 I’ve mounted the Bluskysea DV988 unit under the seat so don’t look at it while riding its an install and forget about it until you need to see some footage. As a rear view mirror it does that on a 4" screen but as Boris said its not enough detail to replace mirrors, maybe you need taller or wider mirror stems that may or may not impede filtering.

@JJ130190 Install is easy. There are 5 cables with factory fitted colour coded plugs that plug into the main unit, these need to be routed from where you mount the main unit. I’ve mounted the main unit under the pillion seat so 3 cables run under the front seat and petrol tank, two going to the dash area for the switch and GPS antenna and one to the front camera mounted under the nose cone. The 4th cable exits out the rear of the pillion seat for the rear camera mounted under the top box. The 5th cable is 3 cables, red positive (via a fuse) and black negative are pre-fitted with ring terminals to fit direct to the battery. The last white cable needs to be spliced into a switched live so the unit turns on and off with the ignition. There is an option in the menu for the cameras to turn on if the motorcycle is nudged while parked.

All the plugs are colour coded red-red, yellow-yellow, blue-blue, black-black. The only confusion is both the cameras have black plugs, the lower outside black plug goes to the front camera, the other black plug to the rear camera.

Used to use a Contoar Roam which was great, ideal shape for a helmet cam, easy to switch on/off with gloves on and had an ingenious laser levelling system. Only downside was the battery wasn’t changeable, also despite being for me the best helmet cam on the market the company managed to go bust so they’re no longer available. Mine died a couple of years ago when it fell off the mount (my fault) when test riding a Zero, and an HGV drove over it. Turned it from being round to an oval shape.

Then got a Drift Ghost X. Because I wanted it on the left side of my crash helmet I had to install it upside down. Was never really happy with the picture quality so wasn’t too sad when the inevitable happened and water got past the rubber seals into the USB socket, destroying it, on a very rainy ride home.

For the past 4 months been using a Gopro Hero 9 Black. Much more expensive and is that silly box shape but the picture quality is much better than the other two, also lots of features and interchangeable batteries. Downsides: you can’t switch it on/off with your gloves on like you can the Contour; I hate the shape; reliability is starting to become an issue (might have to return it) and pointing it the right way is more down to luck than judgement.

@National_Treasure when you say splice the white wire to a switch. Is that easy enough to be done? Basically does the manual walk you through completing this task as this sounds like the system i will be purchasing

I have a Sena Prism Tube on the helmet. I used it mainly while commuting. The video evidence was perfect for a conviction against the guy that rear ended me and admitted he had defective brakes.

I used to use a Drift Ghost S. Good with the 3 hour battery. Instead of buying spare Drift batteries at £25 each, I found other batteries on Amazon. I couldn’t decide between £12 for 2 batteries and a single unit USB charger, or 4 batteries with a double USB charger, so I bought both. Yes, I have 6 spare batteries for it. The first one I bought failed after a few months, so I returned it to the shop, Lids Direct, and got a full refund. I then bought another from SportsBikeShop.com. I still have it.

However, I bought the Drift XL in July '21, which has a fixed battery that has a genuine 9 hour recording time. The camera is slightly small, and has no viewing screen. I bring a battery power bank with me, when I ride, so that if necessary, I can simply charge it up on a coffee stop. This retailed at £150 when I bought my first. I bought a second one in October as the price had dropped to £117.95 at Infinity Hanger Lane. I have had problems with the second one, and it has been returned to Infinity twice. The problem is that it froze, and would not respond to any control buttons. There is a tiny reset hole that a pin can be used to turn it off, but as it froze after resetting, I returned it to Infinity. They were good at sending it back to Drift, and I got it back about two weeks later, but the same fault has reoccurred, so I’ve returned it again.

I have used the SJ4000 cameras bought from ebay, but their batteries only last about 50 minutes.

In summary, 50% of the Drift cameras I have bought have failed. Yet with a 9 hour battery life, 1020p recording, and able to take 128Gb card which gives 18 hours of recording (at 1020p & 30fps), I think it’s the best value camera out there. However, I’d love someone to prove me wrong with a better &/or cheaper camera.

@JJ130190 Splice the white cable into a switched +12v live, depending where you mount the unit you can use either the side light or number plate light wiring for the switched +12v live. I spliced into the rear tail light by means of a red scotch lock.

@JJ130190 Nothing difficult to it. Make sure you have a wiring diagram to identify the side light circuit cable, a red (or blue) Scotch Lock for the splicing, an inline mini fuse holder & 5A blade fuse for the red positive cable, a pair of ring crimp connectors (some units came without) for the battery hook up. Plan the instal and work to the plan. I found the most complicated part of the instal was in locating the main unit and running the cables where they are safe, secure and out of sight.

Heed warnings. Generally, what @National_Treasure suggests is an easy job, I’d argue most people, particularly amongst a younger demographic, would have neither a clue how to carry out, nor the tools to do it. This doesn’t apply to this specific example only

By all means learn but don’t assume you’ll have it done and dusted in the morning before your afternoon ride, especially when it’s your first time doing something.

@Serrisan i get this i do. I generally figure out most things and my old man has a shed full of all sorts of tools should i need them or a hand with the handiwork, i pay him a visit

Fair enough. I generally try things, break them, pay someone more money to fix that I would have paid in the first place