2 months into my ownership of the lovely MT-09 and some c**ts already tried to steal it from my backyard last night.

I live in a multistory building with a little area behind it where there’s a small building with rubbish containers as well as space for some 3-4 cars to park.
Also, there are a few of those railings cemented into the ground, to which me and another guy chain our bikes every day.

This morning I went downstairs to go to work and noticed that my bike’s been moved from being parallel to those railings to being almost diagonal between them.
At first I thought it was some car driver who couldn’t squeeze his car in, however there are usually no cars overnight as there’s some school downstairs and they all leave around 6-7pm.

Started taking my cover off and noticed it was torn, pulled it off and the glass covering the number plate light fell out. Next thing I noticed was my recently replaced brake lever has been broken (bent back) but still usable.

Rolled the bike out, checked around it and all seemed well. Got onto it and realised that the forks are all bent! The wheel is now pointing to the right if I hold my handlebars straight.

I’m pretty sure they knew what they wanted because the bikes can’t be seen from the street and usually the gates separating the compound from the street are closed. Besides they didn’t even touch the other guy’s 250cc bike that wasn’t chained.
So it all smells like an targeted attack.

I would still be a bit shaken up from the fact that someone tried to steal my bike but now the fact that it’s unridable makes it so much worse.

What do you usually do in these cases?
I’ll obviously call the police. I think I’ll probably get a quote from the dealer first to see if there’s any point in contacting the insurance as it would most definitely skyrocket my premium being a new rider.
There is also a CCTV pointing right at the bikes from around 20 yards away and I’m currently waiting for the security guard to come to work so that I can have a look at it (they arrive around 11am, which is a bit funny. Security…).

Anything else I should do? Has anyone else had similar damage? How much could it cost me to get it taken to a dealership, get forks straightened/replaced?

Thanks for all the replies in advance!

Sorry this has happened mate.

Could it be that the handlebars are bent, rather than the forks?
I had an off recently and the handlebars bent a bit, which made it look to me like the forks could have been.
New bars cost me £25.

Could be the bars that bent as they tried to force the steering lock, for your sake I hope so, bars are cheap and would mean you wouldn’t have to claim. Definitely phone the old bill though.

I really wouldn’t want to find myself in a situation of having to wait for weeks or months till the parts become available.

I really wouldn’t want to find myself in a situation of having to wait for weeks or months till the parts become available.

I’m a newbie so I could be wrong but I would imagine bending the forks would take a LOT of effort, compared to bending the bars.
Also they would have tried to move it, perhaps snapping the steering lock, so it makes sense to me that will be the first to go, rather than the forks.

the video would also show if someone tried to steal it or clumsily knocked it over and then picked it back up.

the video would also show if someone tried to steal it or clumsily knocked it over and then picked it back up.

Just called the police. They will be with me in an hour. Also got the details of the building management company to retrieve the footage.

I’m leaning towards thinking that it wasn’t a car driver because there’s a hole in the cover above the number plate light, the little glass covering the light was on the ground, plus the plastic protrusion is broken.
The brake lever is broken by bending it away from the rider and the forks/handlebars are off.

Also, there are no scratches anywhere, even though it’s parked between two railings, which would have damaged something had it fallen over.

All these things put together look like someone tried to grab it at the back and pull from the front without even taking the cover off or checking if it’s chained.

I would love it to be a driver though. I’d make him pay for all my repairs

Does sound a bit like it may have been knocked over, was the chain/lock damaged - you’d think that’d be where theives would be trying to attack.

Hopefully CCTV will be able to identify the culprit, especially since it sounds like there’s a limited number of people with access to park there.

Either way, call the police - it’s either attempted theft or some sort of criminal damage. Also, the security guard may not be happy handing out footage to you if the police aren’t involved.

Find somewhere to hide it quick before they come back

Hope the CCTV is working.

Might be worth asking people who park there if they know anything about it.

I am also thinking it sounds like it’s been knocked over, the brake leaver just sounds odd and the only really way that could have broken is if it was dropped.

Hope the mystery is solved soon.

Find somewhere to hide it quick before they come back

exactly this. they’ll just come back with tools.

Hope the mystery is solved soon.

And it indeed has been!

I had the pleasure of dealing with a policeman who is also a biker (rides a Street Triple).

Usual stuff, took all my details, asked what happened and we went down to see the bike. Took us a while to decipher the crime scene but we came to the same conclusion that you lot already did - it wasn’t an attempted theft, it was some t**t who drove into it and fled from the scene, without leaving any details. 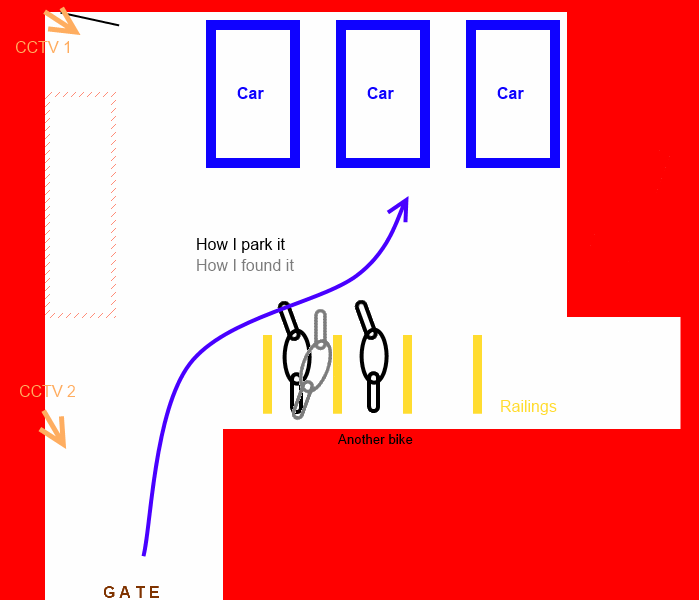 These are schematics of the compound/backyard where I park it (I know, I know. I was bored).

I always park my bike in the left bay. There are cars coming in through the gate and parking along the wall above (can’t fit more than 3 cars in there) as well as right above the bikes when those 3 spots are taken. The gap is big enough to maneuver and one must be a total idiot to not be able to to do that, however, it seems that’s exactly what has happened. It must have been some idiot reversing or someone being totally blind who rammed my front wheel.

That must be the reason why I found the bike pushed all the way to the right this morning with the front wheel twisted some 5-7 degrees to the right. Steering lock still works and was engaged overnight, which would explain why the handlebars are still straight. The steering lock stopped top of the forks from rotating but as the force hit the wheel itself, it dislodged the bottom block through which the forks go making the whole geometry twist, if that makes sense.

He will be submitting a request to view the CCTV footage and hopefully I can catch the bastard and make him pay for everything… and more.

Luckily, as I had the cover on overnight, there are no scratches whatsoever and there’s nothing even on the forks or wheel itself. Phew!.. On to sort out the repairs and insurance.

A friend of mine suggested to use http://www.directaccident.co.uk/ as they will deal with the whole thing for me and even supply me with a courtesy bike.
Has anyone dealt with them previously? He’s a trustful friend but sounds too good to be true. He said I wouldn’t have to pay anything, that they’d claim it from the guy that fled the scene.

Thanks in advance as always!

P.S.
Added CCTV cameras to the image. We couldn’t quite tell if it would see my bike as it’s poiting more towards the cars but here’s hoping. At least CCTV 2 would be able to show the car if it came in, knocked my bike and left.

when its fixed, park it further from the gate! let’s hope that CCTV was recording OK!

Avoid insurance if you can. even if the car driver pays out, it’s still a negative mark against you as being higher risk because it happened.

just have a polite word and see if they’ll pay out for a garage to do it. would be a lot cheaper that way for them than their insurance and a lot faster to sort out too.

Similar thing happened to me a few months ago at my works car park, the driver wasn’t a regular and was there for a one off job so thought he would get away with it. got the CCTV footage showing him going into the back entrance of a shop, acquired his details from them and got him to agree paying £400, crash bungs saved most of the bike, just a scratch on the tail, bungs, etc.

if you do try to come to a gentleman’s agreement REALLY push the fact that if you decide to let the police deal with it, it could cost him his license! they tend to be very helpful after that

@GreenNBlack lol, I definitely will. I’d be very surprised if we can’t get the numberplate of the car from the CCTV footage (unless they’re there just for the show), and if/when we do, I’ll make sure to get out of him/her every penny I lost today. Being a contractor I lost my earning too for today thanks to them.

Since the police are checking the cctv (and the copper involved is also a biker) surely there’s a fair chance that he’s going to get hit with failing to stop (and careless driving?), which could make the repair costs seem pretty minor by comparison https://www.gov.uk/highway-code-penalties/penalty-table

Since the police are checking the cctv (and the copper involved is also a biker) surely there’s a fair chance that he’s going to get hit with failing to stop (and careless driving?), which could make the repair costs seem pretty minor by comparison https://www.gov.uk/highway-code-penalties/penalty-table

exactly what I was getting at