I am considering a bike that would suit my future riding gigs and would involve some:

Long ask - i know…but after being put off by all the negatives i’ve heard about the GS’s and the KTM’s i decided to be boring and am considering a transalp!

What’s your budget? Fully loaded a lot of these bikes come in at over £12k.
The KTM & Beemer are class leaders but if youre looking for something a little less expensive, you could consider the Triumph Tiger 800/XC? 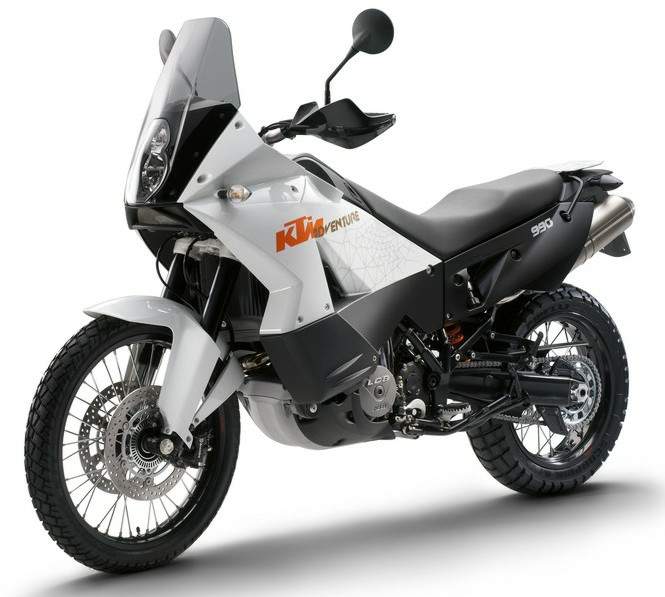 can you afford BMW service costs?

what are the negatives about beemers and KTM’s. as niteowl says, they are the class leaders, and the transalp, while great in its own way, is heavy as ****, and the beemer and ktm will out perform it all day long.

let us know what you are planning to do with it, loads and loads of options, but to give you the best advice, need a bit more info.

If I was looking for an “all day” bike with a bit of off road capabilities, the 990 is the sensible choice.
c£10k
Personally, I dont like the look of it so 2nd choice would be the F800GS. Similar price (bit cheaper) but with more off road bias and from what I’ve heard, excellent mpg.
I wouldnt discount the Kwaka versys 1000 as a mile muncher although a bit heavy, also c £10k.
I do like the look of the two Triumphs though and considerably cheaper yet still excellent vfm.

What about the tenere thats what I want

how about the new honda cub? there’s an offroad version of that.
http://www.visordown.com/motorcycle-news-new-bikes/new-honda-cub/24076.html

Looks alright that, the scrambler looks cool as well

No motorbike is good offroad. The rider enables a bike to be good offroad. There is only one type of bike that an average rider can use off road: a small cc dirt bike. Take away the knobbiles? Problems. Add luggage? Problems. Two up? Problems. Anything less than a dirt bike offroad isn’t going to be working with you. You will be as slow as if you were on a Harley. So my point is that unless you are going somewhere specifically offroad and can ride offroad, dismiss it as your criteria, and take whatever you want as it will be no better or worse than anything else when offroad as you are probably the limiting factor. And if you’ve grown up with dirt bikes / won a few rallies, you can probably take a poor bike further than most and don’t need a specialist dirt bike unless you’re heading out to some very specific scenarios.

I try to explain it like this. 90% of days of the year I walk around, but 10% of the days I decide to jump out of a plane. Because I don’t know when the opportunity arises I always carry a parachute. But because I only do it 10% of the time I’ve decided to buy a parachute a 10th normal size: but I’ll regret this decision immediately when I jump out a plane. The same apples offroad, when you are properly offroad a compromise ‘dual sport / adventure’ bike won’t cut it so you might as well have not bothered with the compromise at all.

It took me many years to realise this.

Back in 2007 I took a Honda Cityfly 125 from London to Mongolia. And it was absolutely fine on A roads, gravel roads, across fields, through chewed up Soviet tarmac, through rivers and streams - until we got to sandy desert. Then it was really really really ****. Delivering pizzas in London: yes, crossing dunefields: no. That’s when I needed a dirt bike. So when I returned home I bought a KTM 640 Adventure. 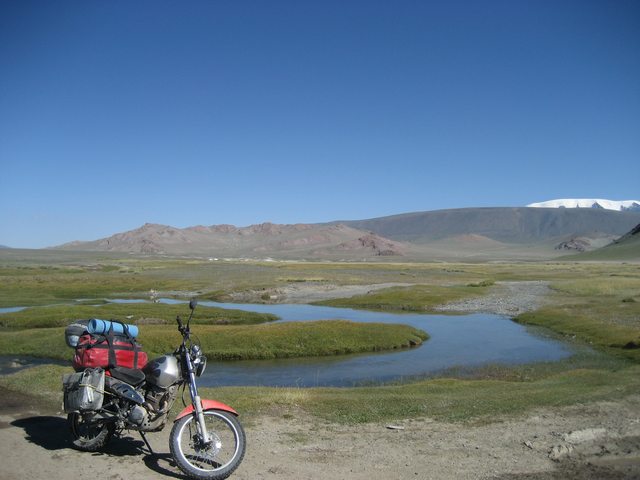 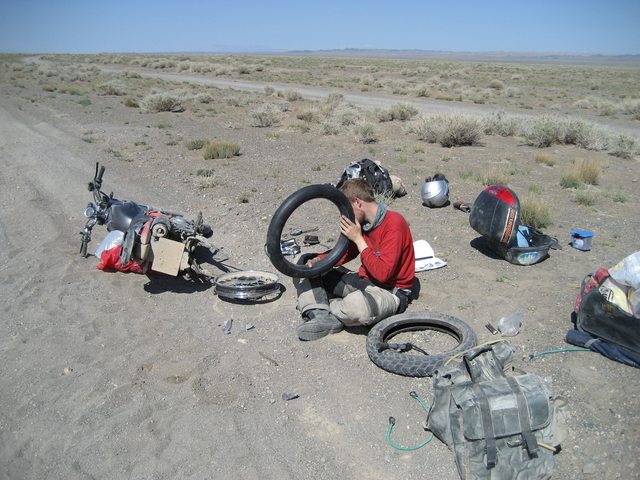 The KTM 640 Adv was as close to a winning Paris Dakar bike as sensible money could buy. So I took it from London to Dakar in 2008. And it was utterly rubbish along smooth European roads or really anywhere that wasn’t dirt or sand. But wow, when it wasn’t on the road it would let me absolutely fly. That dirt ability made its presence felt and that trip had enough of a mix to make the compromise worth it. 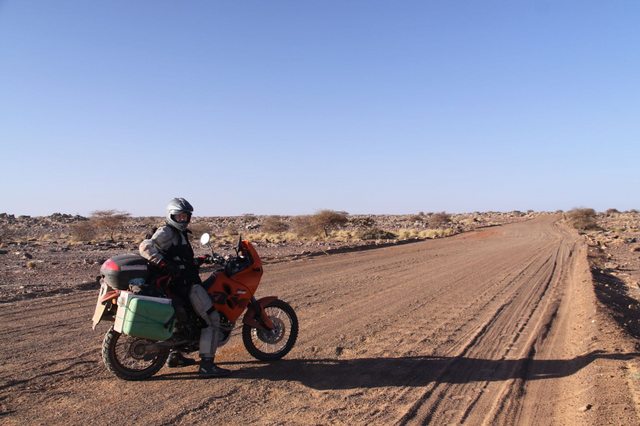 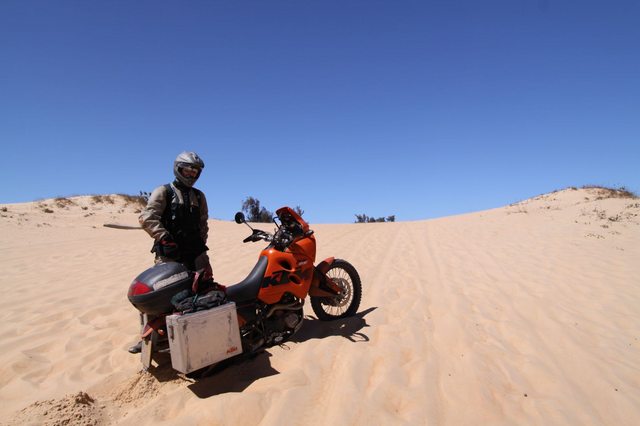 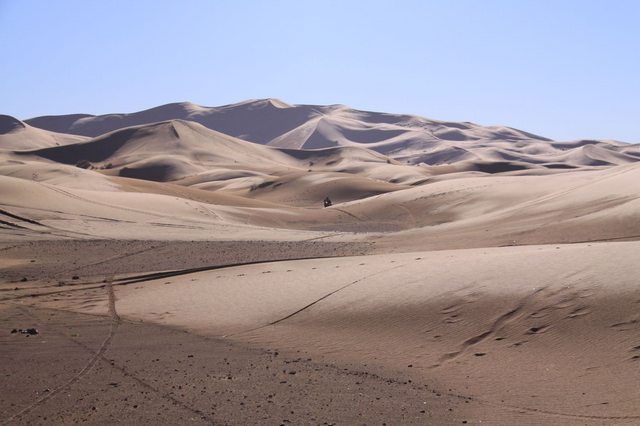 The same 640 then went on a trip with LB’s Zander from here to Bahrain. A dirt bike tends to want to skid and slide which helps it offroad, but this characteristic makes it pretty dangerous on slippery wet tarmac roads, especially without ABS. It was basically a nightmare in the wet and very realistically could have killed me. The trip ended up being 99% road, so was it the wrong bike? I was very glad to have it when things got dirty, as it kept me from losing the bike in mud (both GSs went down) and staying stable in sand (one GS rider broke his ankle). After this I learnt that unless I’m going to across cross the Sahara again I can tolerate a little more compromise: I bought a KTM 990 Adventure with ABS. 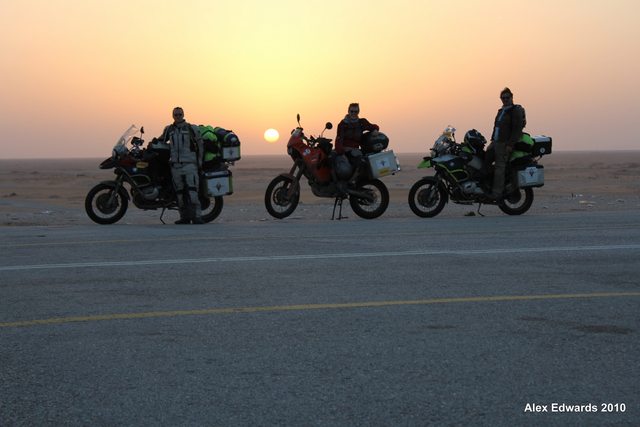 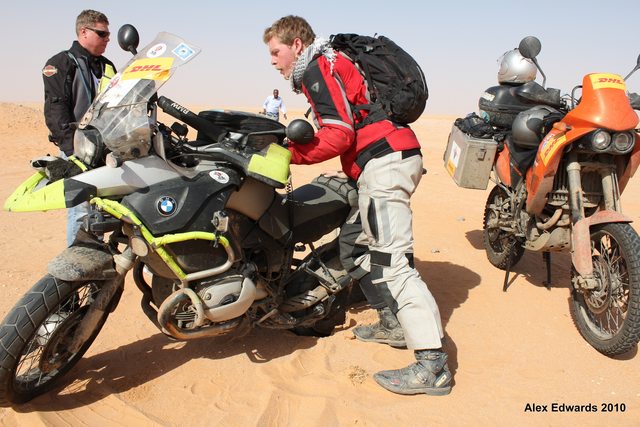 For me, and how and where I ride, the KTM 990 is perfect. On road it’s pretty good; it’s certainly not great but in the rain and wind it pushes through and has the electronics to keep me safe. The panniers limit the lean angle. It will run all day on octane 60 “petrol” and not complain. It would let me fly over the melted Turkmenistan roads at 85mph, where the GSs would be bottoming out, slamming their weight into the ground over and over but my sump guard is still smooth after 43000 miles. It sounds good. The chassis is directly from the Paris Dakar bikes and when you take it offroad it really lets you boss it - again, the dirt ability. You can drop it, pick it up, and carry on. It has never let me down. But it’s still a heavy bike, and the price for its ability in the dirt is felt on the road - but I’m fine with that because it does what I ask of it and I put it in those situations and feel that I can control it sufficiently. It’s a big dirt bike with road tyres. 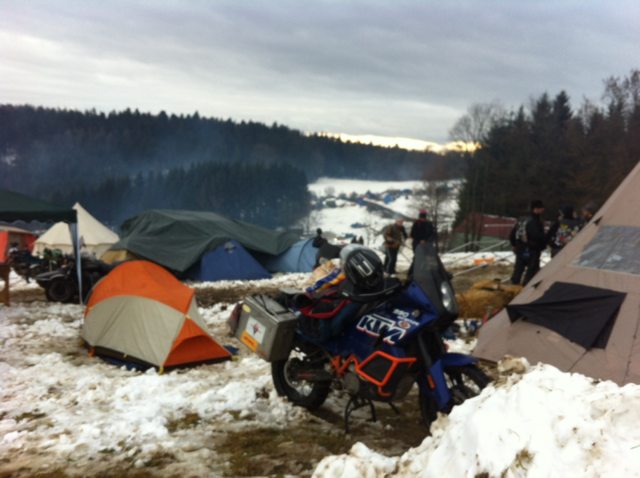 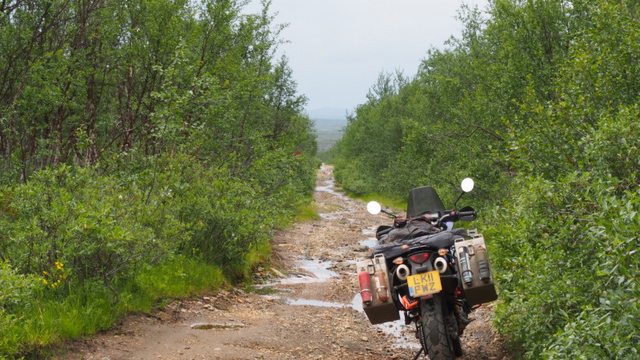 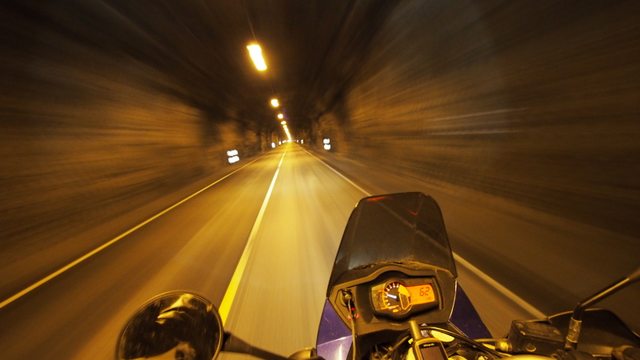 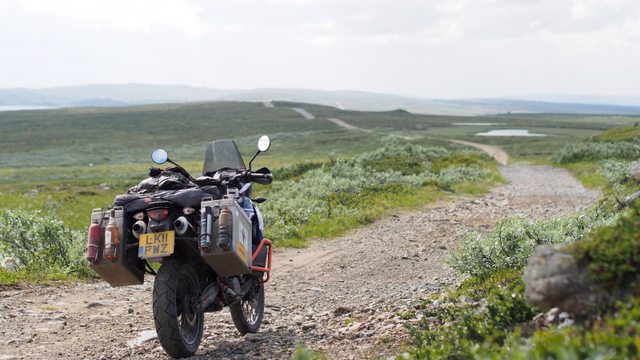 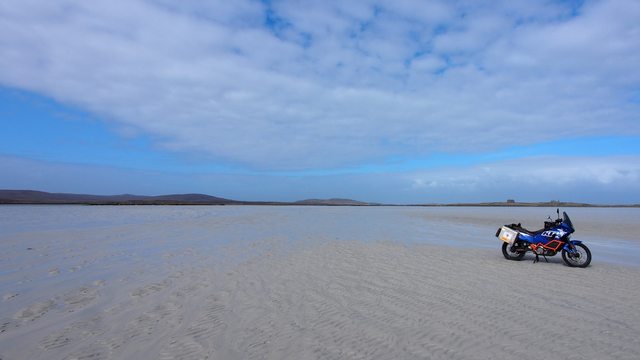 Everything is a compromise, but a compromise on dirt is not worth having and the cost of having dirt ability comes at the expense of other things. My advice to you is unless you are actively looking for offroad - I’m talking about crossing a desert or making your own path across a landscape like Mongolia - just pick a decent comfy road bike and muddle through the occasional rough bits that you come across.

Case in point the world’s most travelled bike: 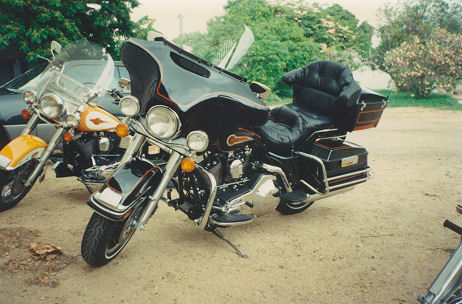 That’s the five a day sorted as well

Looks alright that, the scrambler looks cool as well 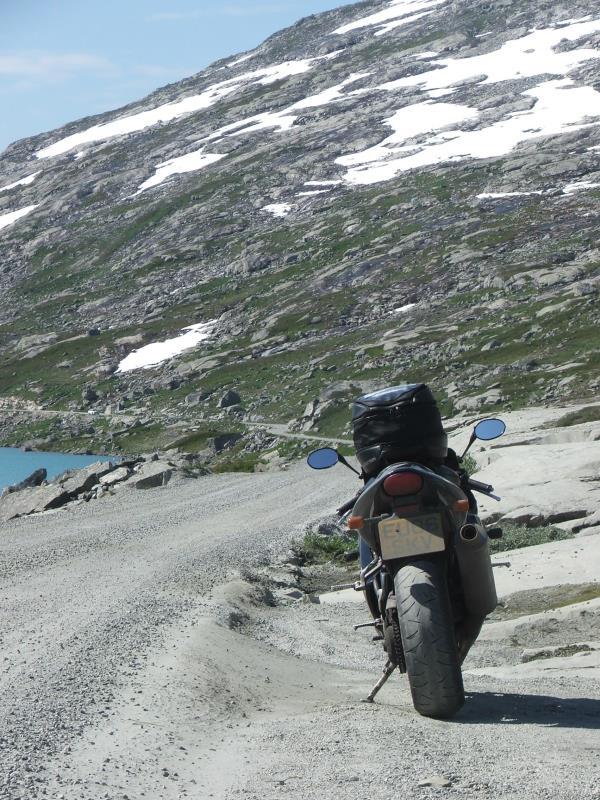 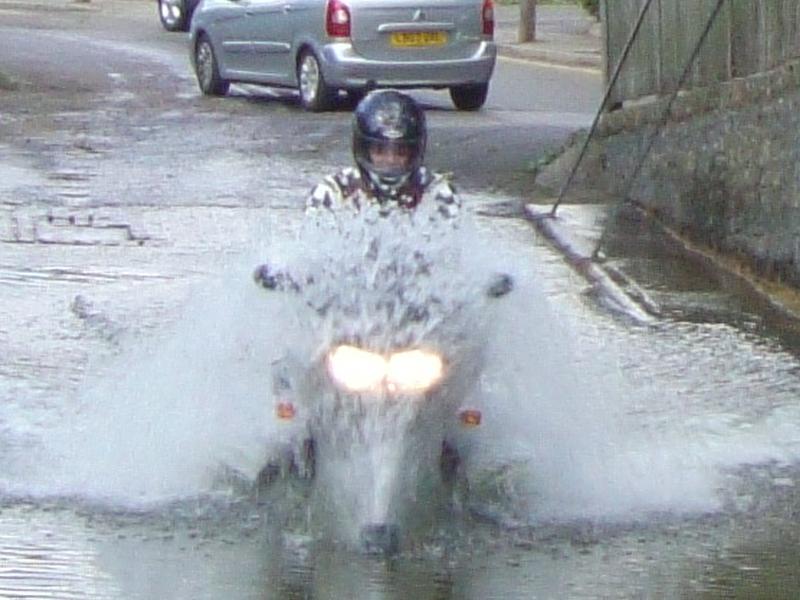 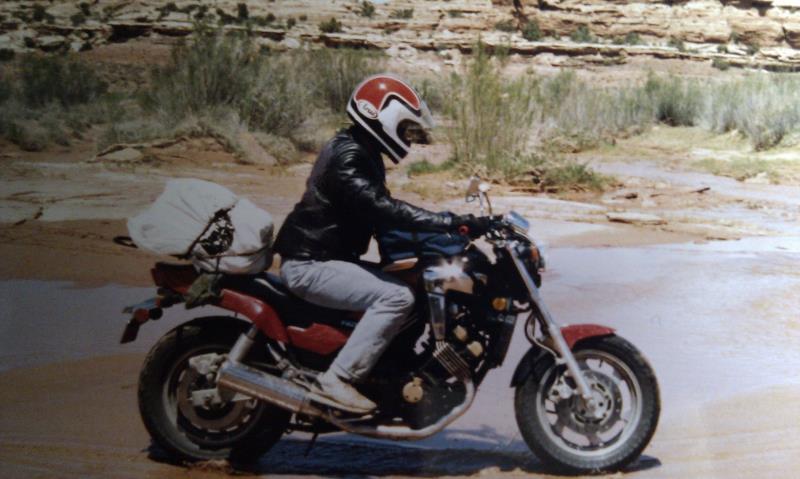