Get breakdown cover for yourself rather that the vehicles.

You can get AA / RAC breakdown for you as a person. So any vehicle, including car, friends’ cars etc

Get breakdown cover for yourself rather that the vehicles.

just saw you can get that!

Just bear in mind… when the year is up, they will hike the price up stupid amounts. With a call they normally bring it down to what a new customer would pay. If they don’t just swap between the two each year.

yeah i always call to renegotiate!

Yep the really do hike the price after the first year. If you do AA speak with @TimR as he can give you a joining referral code that gives him a little kick back.

They add a mahoosive ‘new customer’ discount and then tell you that you’re paying the same as last year. It really is quite funny when they realise their script doesn’t make sense.

At least that has been my experience on two accounts. Once I even went and got a quote on the AA site as I was talking to the guy and bought it there and then. For some reason it didn’t pick me up as an existing customer which should have blocked me

For years I’ve used RAC with full European cover and they covered me and Claire. I was the principal account holder and Claire as spouse was also covered no matter what vehicles we were in/on.

so she was covered by being a spouse or you had a two person insurance?

I think it was just her as spouse. She was named so had her own cards, etc.

between the two bikes and the car that isnt too bad

what??
so nationwide doesnt include your home? 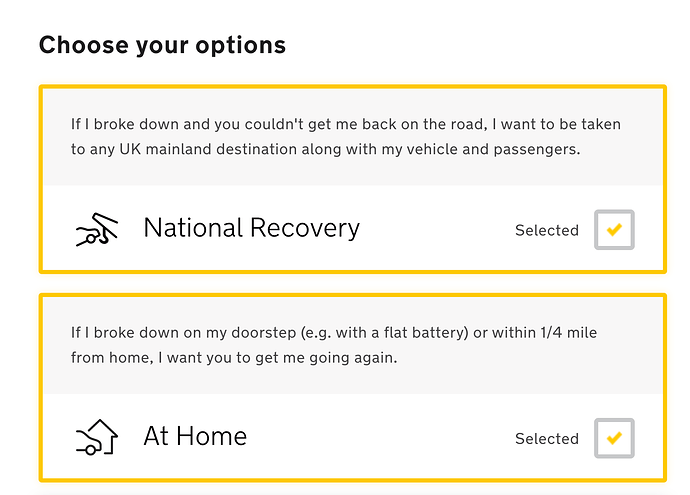 +1 on breakdown cover to do you. I have RAC George Burrows membership via my sister who’s police. The plus sides of this is I can own a number of old vehicles and I know I’m covered anywhere in Europe same if you’re a passenger and I think this is only like £50-£60 a year

The downside is that I don’t think the RAC is very good. Car blew a hose up just outside cambridge January 2019 and the RAC took almost 2 hours to arrive from what I recall.

I had a bike clog a fuel pump just north of Birmingham in December. Needed ferrying home (Kent). I’m sat on the M6 with no hard shoulder for 3 hours waiting for recovery. Police and Highways Agency kept coming to me on flashing lights asking me when I was moving. It was pretty loud and cold. Then it rained. Instead of taking you home in one hit, I got shuttled short distances by different contractors who weren’t actually part of the RAC. I’d left my house at 4am that morning and didn’t get home till 10pm (I broke down at 9.30am). Didn’t eat a thing all day but did manage to have one cup of tea at Newport Pagnell services.

The point I’m trying to make is, if you intend to use it - it’s really really worth weighing up getting cover that is really well reviewed. My time’s pretty valuable to me and if I broke down in Europe I can well imagine I’d be annoyed if I got bunny hopped a couple thousand miles home

Most breakdown covers cost extra from home. The nationwide is about the distance they will recover you.

Anecdotal counter experience, RAC have always come out to us quickly. Especially when we were due to ride to the Channel Tunnel for a roadtrip to the mountains and @pricetta accidentally flooded her CBR600 the night before. They came out quick sharp and got us on our way.

Also saved us a few times quite quickly when we had a 30 year old Porsche 944 that didn’t like Claire so much for some reason and would break down.

Also, their members club on Pall Mall is rather nice

Also, their members club on Pall Mall is rather nice

Is that a benefit to those with policy or does one need to know the secret handshake?

Just to add I’ve had great and no so great experience with both. I think it’s hit or miss based on where you breakdown, when and why… A flat tyre in London bridge took a lot longer to organise and fix than a missing number plate in Bromley