Zero Motorcycles, the world leader in all-electric motorcycles, has developed a special police specification version of its popular SR/S model, which is being debuted at this month’s COP26 Summit in Glasgow.

The electric motorbike is being trialled by West Midlands Police, who are supporting security operations at the summit and using the Zero to chaperone dignitaries.

Zero’s SR/S is a premium sports touring motorcycle, capable of a 124mph top speed and able to travel up to 200 miles between recharges. The Police version has been modified by Coventry company Woodway Engineering to include full UK specification police livery, sirens and blue lights ahead of the summit. The machine is being ridden by PC Paul Ennis, who has previously ridden an unmarked Zero SR/F as part of a 2019 road education programme.

Speaking about the project, Dale Robinson, Zero Motorcycles’ UK Country Manager commented: “Zeros are proving to be popular with police forces throughout Europe and America and we believe that this SR/S provides UK forces with a greener, yet incredibly cheap to run and practical solution for their fleets.

“We’ve worked with Woodway Engineering and West Midlands Police to build this SR/S ahead of COP26, and we have plans to further develop the concept with the addition of panniers and additional radio equipment. Our plan is to make the Police spec Zero SR/S available to fleet buyers in 2022, and we will be making the motorcycle available to any other forces who would like to trial the machine.”

Inspector Sam Lewis from West Midlands Police added: “We’re really grateful to Zero Motorcycles for giving us this opportunity to use an electric motorcycle at COP26. Within our fleet we already use electric bicycles and was the first force to introduce electric cars to our fleet. Electric motorbikes are something else we are actively looking at for the future.

“We’re really happy to be able to support the event and this has allowed it to do it a little greener.” 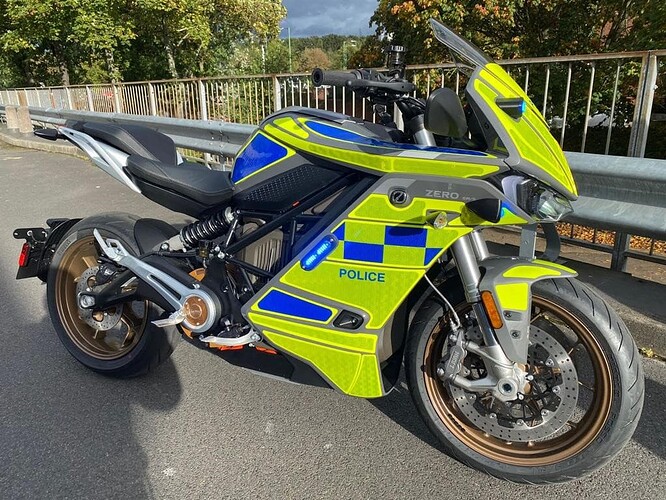