Why don't motorbikes have fog lights?

I’ve always wondered this or am I being daft*?

Do the silly tourers have fog lights?

*Answer yes and I’ll send the boys around, ok

by fog lights do you mean the small ones down low that i can keep on aaaalllll the time because i think they look cool…???

Yes, those. Although I suspect a front fog light wouldn’t be easy to mount on a motorbike, maybe on the fork lower legs? However I can justify a rear one quite easily.

I’ve seen many Beemer GS’s with what look like fog lamps on. Not sure if they’re standard or extras though

Theres a foglight question on the DAS if its relevant

BMW, and a few aftermarket people, offer high intensity (aka “bright”) rear lamps and I keep meaning to fit one but I can’t find a neat LED one at sensible money.

Almost prepared to lay money on them becoming compulsory on new bikes in a few years time.

The neatest front installation I’ve seen was two strips of white LED’s with lens on the fork legs of a Harley. Just looked like posers rubbish when not in use.

BMW R1200GS have them as a factory fit option.

Touratech do them as aftermarket (thinking of fitting these these for the F650) but a bit pricy but a neater unit.

There are a couple of others that do them that fit to engine crash bars. 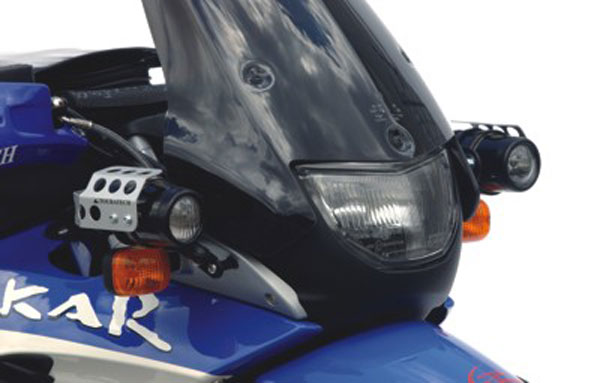 because the beam shape on a motorbike is flat on dipped beam, hence it works like a fog light already…that is why you do not need to change the beam pattern when going abroad…

There were a few foggy mornings a month back when I would have felt a lot happier with a fog light on the back - the BMW front fog lamps look quite cool.

Now an official accessory on the new Transalp 700:

The BMW fog lights are just rebadged Touratech stuff, and only one is a fog light the other is a driving or spotlight.

Having ridden in dense fog, having front fog lights wouldn’t have helped other to blind yourself, but having a a rear would have been nice.

The BMW fog lights are just rebadged Touratech stuff, and only one is a fog light the other is a driving or spotlight.

I’d like to wire mine to a seperate switch and the high beam (don’t know if I can though) so during the day I can use them as running lights if I want and at night for fill on high beam.

Already ordered an HID kit for the main lights which will be fitted on Sunday, also found some good aftermarket rear led lights from Germany that will be ordered tomorrow.

Quite liking the idea of fitting the mudguard light as well as a running light then use the spots for high beam. 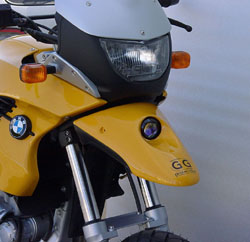 Front fog lights mounted high up are a waste of time which is why the good old Vehicle (Construction and Use) Regs. all ow them to be fitted much lower than standard front lights.

To be effective in fog, they probably need mounting at about front axle height.

There are limits on their use when mounted low down. (Apparently, these don’t apply if you drive a BMW car.)

Rear fog lights are much easier. They just have to warn the twat behind you that there is a vehicle in front of him. If mounted fairly separate from the rear/brake light, I can’t see how anyone except a complete lame brain could confuse the two.

I’m looking for a high intensity LED strip to mount below the bottom edge of the rear 'plate. Anyone know where I can get one?

I’m looking for a high intensity LED strip to mount below the bottom edge of the rear 'plate. Anyone know where I can get one?

OK so these are not strp lights but might work.