Just back from a week on Kos where I hired an Aprilia SportsCity 125 for 4 days, and I’ve got to ask the question… Why do people ride a twist & go when there’s a whole world of motorcycles out there that offer so much more fun???

I wanted to hire a bike, but as my travel insurance limited me to 125cc, the only stuff available to rent in Kos town was stuff like Gilera Runner 80cc, and lots of 150cc scoots. It was like shopping for a washing machine (it was white as well)… BORING! Picked it up with 64km on the clock and took it up to 460km scooting about the island. 70mph just possible on the downhill, wearing shorts/t-shirt/trainers/pudding-bowl helmet so tried to avoid crashing, throttle pinned most of the time so I’ve certainly run it in

fuel consumption 67.5mpg :rolleyes: so managed to drink more than the 70mpg I got out of a VanVan courtesy bike last Easter… nowhere near as efficient as I’d been lead to believe scooters were.

Conclusion: I think I’ll need to be very old and decrepit before I’ll ever consider a twist & go scooter as my chosen form of transport

thats it, they make them for girls

Scooters are great fun as a kid but boring as hell anytime after 16!!

Did they not have any Crossers?

When we went kavos a few years ago we’ll hired 125 Crossers and done some off reading it was great.

Did they not have any Crossers?

Tourist season doesn’t fully kick in until start of May so much of the island was still shut. I did pass one place on the other side of the island that did trailies, but the buses were a bit hit & miss and I couldn’t have gotten to it without transport so I was stuck on the scoot.

After Kishan posting previously about how his scooter was everything he needed at the moment, it hit me that anyone who thinks a scooter is all that, is seriously missing out! It’s like a hierarchy of transport… Bus:angry: --> Taxi:( --> Car:doze: --> Scooter:rolleyes: --> Motorcycle:D 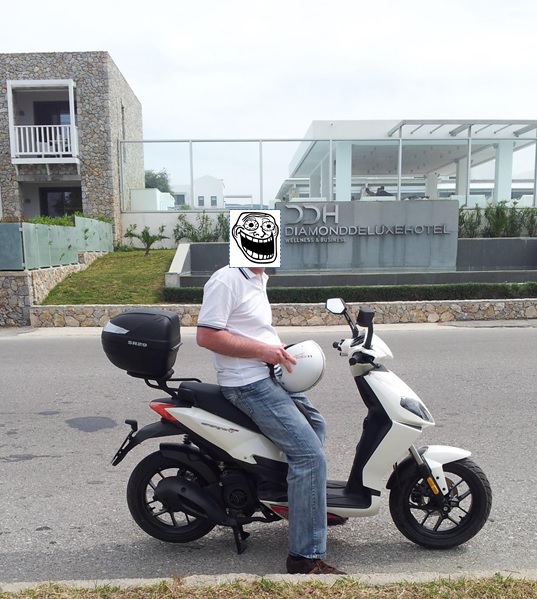