Christmas came a bit early for us. @pricetta has a new ride and needed a new helmet so we popped down to Infinity Motorcycles in Camberley (their clearance store) and picked up a new Shoei Neotec 2 for her, in a rather lovely matt blue scheme.

I’d also been planning on upgrading our old Interfone F4MC intercom units, which are maybe seven or so years old. The main issue with those was average audio quality, only one channel so you could intercom OR connect to the phone/satnav but not both, which was super annoying when we were touring and needed navigation but also the ability to talk to each other.

I was also unsure if I could use my new custom-moulded earphones/earplugs with them.

Turns out Infinity had the new bad-boy Cardo Packtalk Black units which are a special edition with bigger JBL speakers in. What tipped it for me is I got 20% off as there was no VAT to pay as we were buying them with a helmet! Might have been another Black Friday discount on top as well, not sure.

Fitting went well into the two helmets, though I think that speaks more to the design of the helmets than the Intercom. We were able to use the clip attachments on both helmets which I’ve not been able to use before (had to use stick pads), so maybe they do have a slightly better design after all.

Claire’s helmet, after removing the inner padding revealed some recesses near where your ears go with some padding in, clearly meant for Shoei’s own integrated comms product. Removing the padded fillers allowed the JBL speakers to just about fit in there, which made the fit super comfortable for Claire. Win!

I didn’t put the speakers in mine as I’m trialling the new custom moulded earphones which double as very good earplugs as well. After a quick test with the Packtalk I was super impressed, the audio quality when listening to the radio/Spotify/podcasts was top-rate.

I paired our two units using the physical controls on them, which did not seem intuitive I must admit, despite the very clear instructions. Though afterwards I realised you can do everything through the Cardo Connect app on your phone, which is super easy to use and very straight forward. The idea of trying to pair groups of riders using the physical controls just did not seem practical, but doing through the app will be easy I’m sure.

We did a quick audio test in the house and it sounded pretty clear. I wouldn’t say night and day better than our old units but hopefully they will sound better on the road when the noise-cancelling and DSP features come into play with lots of road background noise.

The channel meshing feature is a killer feature. We each played music from our phones using the app whilst still connected via Intercom and could hear each other really clearly. When you or someone else speaks the music (or satnav) will fade out a bit, allowing voice to take priority. I think you can choose what gets prioritised through the app as well, so if you wanted nav to take priority you could, I think.

The unit also has it’s own voice assistant, so you can ask it to do things via “Hey Cardo” as well as pass-through to your phone so you can say “Hey Siri/Google” and get that functionality. I’m really interested in that as it makes life so much easier as a biker. 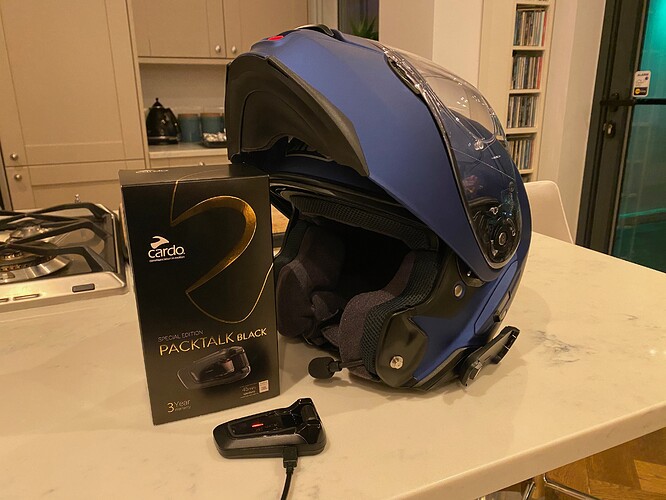 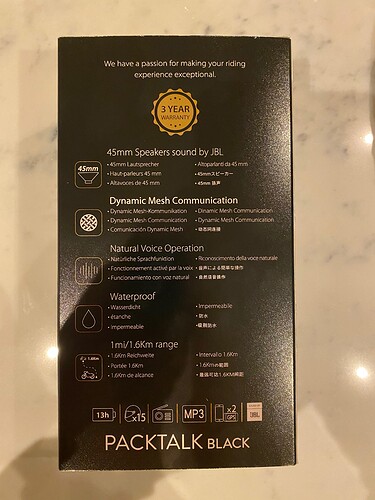 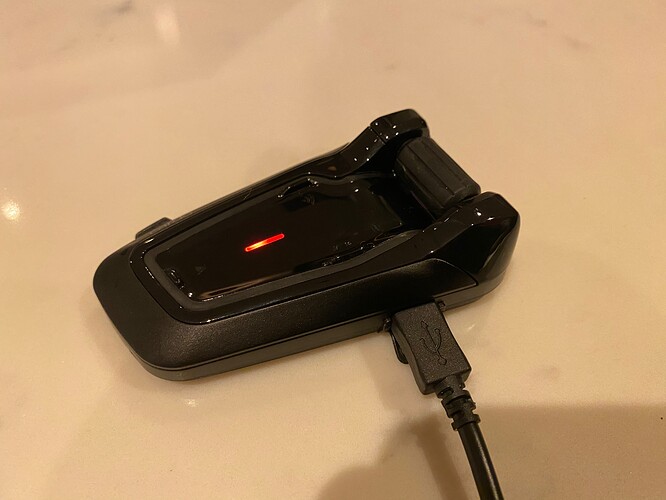 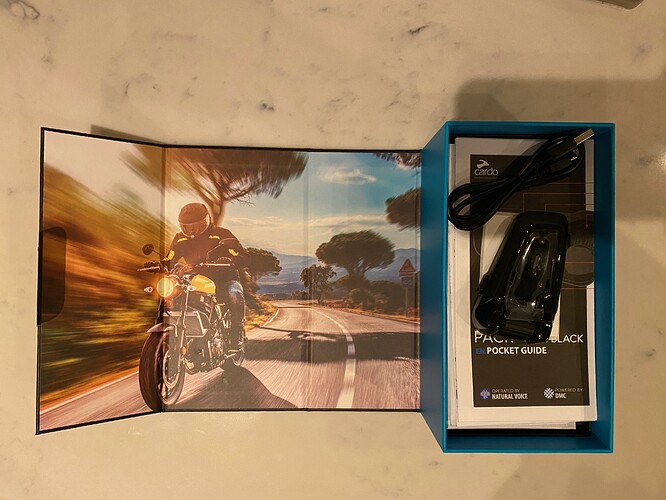 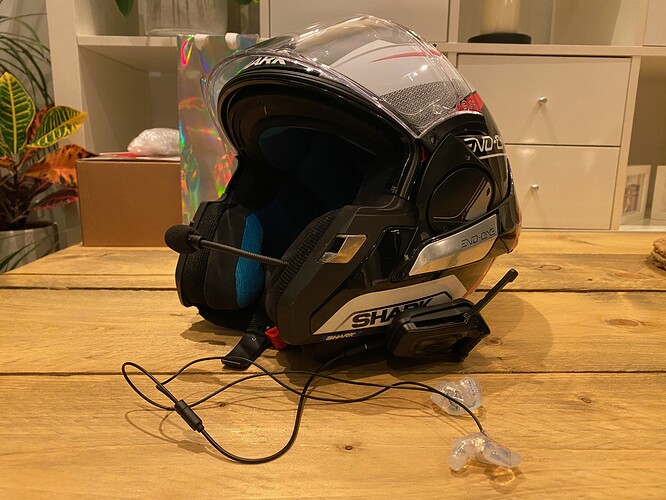 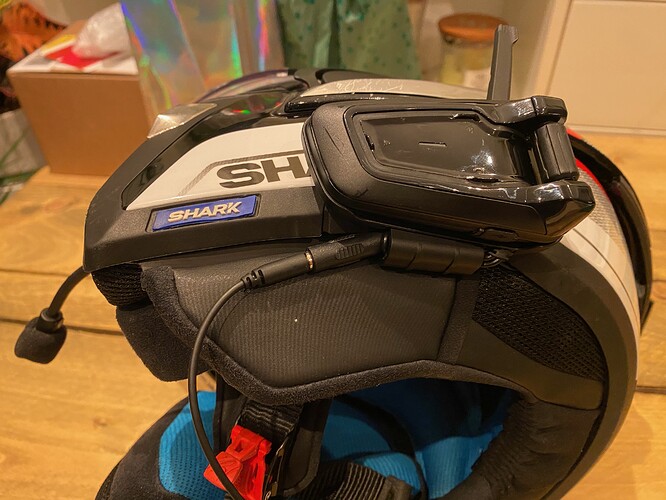 Footnote: Whilst removing my lining to take the old unit out I was disgusted at how dirty the paddings were so had to wait another day before fitting whilst I hand-washed and dried the lining, ergh! Looks and smells wonderful now though, like new

Some screenshots of the app on iOS: 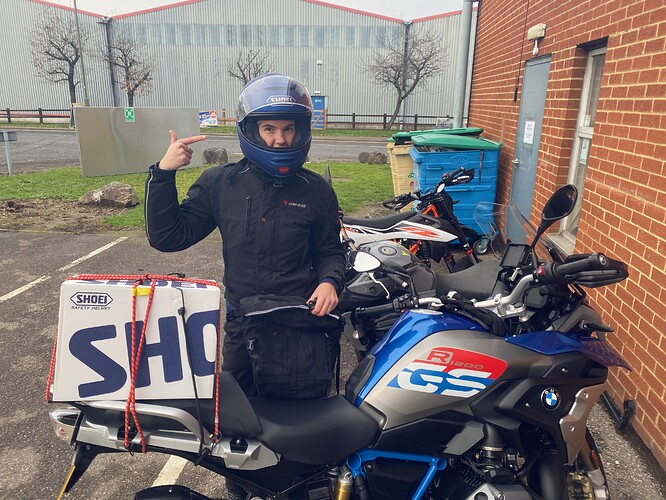 My word that’s a big lump on the side of your lid. One of the problems I get with my sena is when I adjust a helmet vent with my left hand, my shoulder armour knocks the clickwheel. 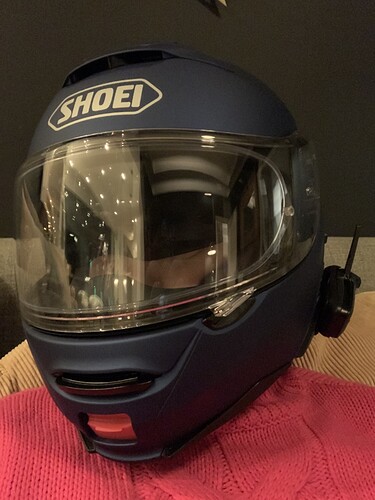 Is the output a 3.5mm TRS socket? Wonder if they would work with my In Ear Monitors.