Anyone know the reason why these two are not part of the ULEZ extension? 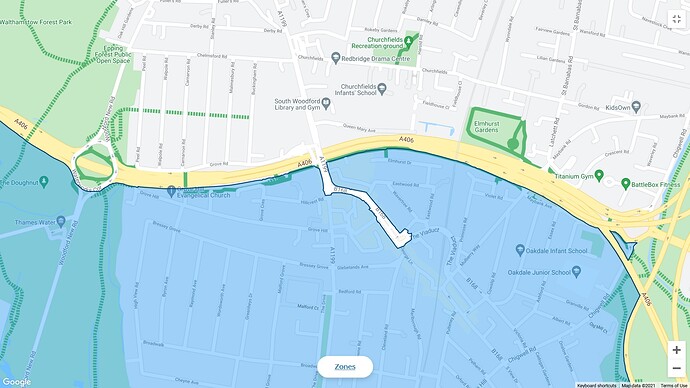 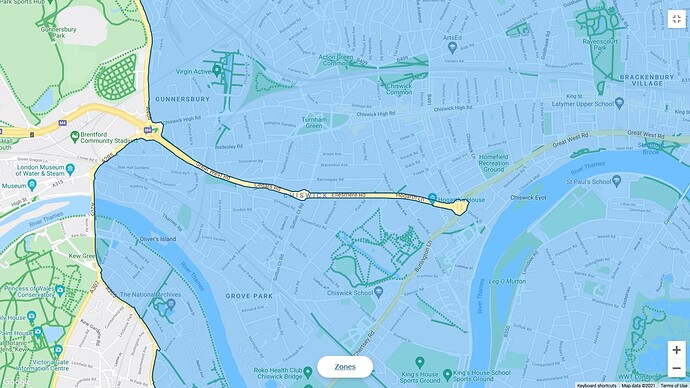 ULEZ: Where and when

Where and when the ULEZ will operate

More likely it’s to allow you to come off the M4, realise your mistake and do a u-turn back onto the motorway. Is the other one similar - just to give you an opportunity to turn around and go back as it looks like you can’t get onto the A406?

Could it be something to do with the big Fullers brewery?

In the top image the A1199 is an overbridge across the North Circular, so the B168 roundabout is the first safe place a large vehicle doing business on the road just outside the zone is safely able to turn around.

And the M4 is similar, as there is no exit onto the Chiswick roundabout, the Hogarth roundabout is the first place to safely turn back when coming off the motorway. Presumably there is something about it being a motorway which does not allow them to start the zone after the slips roads at junction 2.

There are also some other similar exceptions.

As you say it is a stealth tax. One which has advanced warnings, is clearly marked, has been widely discussed and explained for several years, and where they have made sure no one is trapped into entering it. The stealthy sods.

@Michael you maybe onto something as there are many such turn around points set up for the LEZ which only applies to goods vehicles over 3.5 tonnes and buses over 5 tonnes and has different boundaries to the ULEZ. The LEZ boundary on the M4 is more or less at Junction 5 (M25) but it allows use of the M4 as far as junction 3 which is odd since there’s an earlier option to turn at junction 4.

As for the ULEZ there is access to and from the M4 and Chiswick Roundabout but maybe the junction is just to difficult for heavier vehicles to negotiate with the underpass and short slip road off the M4 onto the A4, I’d imagine it would be virtually impossible for a left hand drive articulated lorry.

Imagine the stealth tax burden of an unsuspecting heavy goods vehicle operator with a delivery into Central London in a non-compliant vehicle where they get hit with LEZ, ULEZ and CC!!

Those M4 slips roads a little way down the A4 are junction 2. I guess it is designed that way as there is no room for slip roads outside the A4 at the roundabout without a lot of demolition. But there is not a lot of merging room when joining at that junction, so you could be right and it is a safety issue. Always a spot I pay attention to when leaving town on the M4.

Never had to think about the LEZ before, but aye that bit on the M4 is strange. Are they worried about people joining in the wrong direction at junction 3? The Heathrow roundabout is a bit funky but it is not that bad. Not like the Stockley Road one to the north of it, where I am still not sure if approaching from the west you are supposed to go around the outside for the M4, or make a 90° turn in the middle and cut through that way. The position of a sign on it suggests the latter.

If I was a gambling man I’d wager TfL’s Traffic Management Team hasn’t got a driving licence between them. That certainly seems to be the case in the LB Waltham Forest judging by all the mad cap traffic schemes they’ve implemented during recent years.