Nonsense, house prices have driven people out of London

It’s not strictly true. I personally know three families who have moved from flats near me in Camden to Hemel Hempstead, Flitwick and Tonbridge Wells respectively purely because they wanted the space that comes with commuter town living. It was a lifestyle choice in all three cases.

We have chosen to stay in our 2 bedroom London flat. That is our lifestyle choice. I don’t mind admitting I would love a double garage for bikes, motorbikes, tools, toys etc but that is the price we’ve paid to stay; that and ridiculously expensive insurance premiums on our motorbikes. The upside is my car hasn’t moved since Easter because everything we need is within a 15 minute walk.

The 15 minute city is an urban planning concept we are going to hear more about in the near future.

A 15-Minute City is a residential urban concept in which most daily necessities can be accomplished by either walking or cycling from residents' homes. The concept was popularized by Paris mayor Anne Hidalgo and inspired by French-Colombian scientist Carlos Moreno. 15-minute cities are built from a series of 5-minute neighborhoods, also known as complete communities or walkable neighborhoods. The concept has been described as a "return to a local way of life." The 15-minute city concept is deriv...

How does the 15 minute concept marry with the need to have a mobile workforce? Is it social engineering to exclude those who cannot or do not want to work from home?

I’d be interested to know in this scenario who is sweeping the streets, serving coffee and emptying the bins.

How does the 15 minute concept marry with the need to have a mobile workforce?

As a small example: my child cycles to our nearby school because that is the choice we have made. Those of us who need to drive for a living, and I know you need your van Howard, benefit from this child not being driven by mum or dad in rush hour. The more we can eliminate such journeys, the more road space for essential services.

Is it social engineering to exclude those who cannot or do not want to work from home?

There has been no bigger social engineering project than the move from town and city living, which we’ve done for millennia, to motor-centric far flung living. 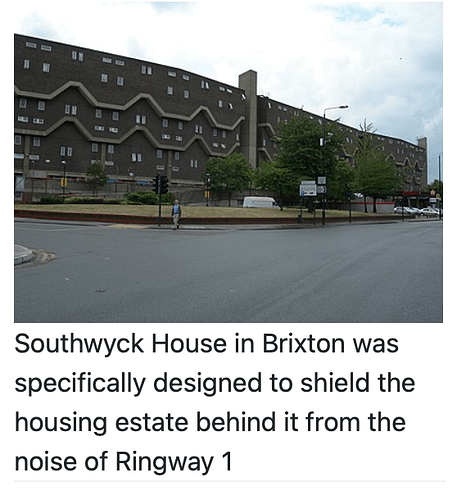 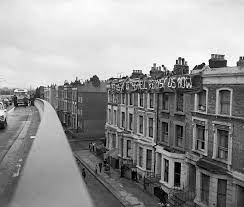 Protests against the West Cross Route (Westway). Thousands of homes demolished, thousands of others blighted forever. 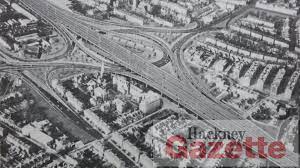 I’d be interested to know in this scenario who is sweeping the streets, serving coffee and emptying the bins.

Parisians are not shy about protesting. I’m sure they will quick to protest if their coffees are unserved and bins are un-emptied.

This is the problem I have with the Parisian model, it creates ghettos The New French Ghettos - Metropolitics

As François Dubet puts it (2009):
The dispute over whether these neighbourhoods are ‘ghettos’ is rather pointless. They are ghettos inasmuch as the poorest of the poor and families of colonial immigrant origins are assigned to live there.

Does the binman live next door to the lawyer? Probably not as they are much more likely to be priced out to poorer areas. These by their nature are further away and have less access to the benefits of the city.

How do you control the growth of a city? Must businesses be spread about the city, i.e. not having a financial centre in a disused dock? Must somebody die before somebody else can move in? If you’re born in Redruth, are you trapped there?

This is the problem I have with the Parisian model, it creates ghettos

I fully agree with that, the French model of dumping immigrants in suburbs is despicable but that is a post war policy which has nothing to do with what Anne Hidalgo is doing in Paris today; you link to a 2009 article, she has only been mayor since 2014.

However having said that, it is a fact that car ownership correlates to wealth, the people who live in these suburbs are the least likely to own cars and will benefit most from reducing motor dominance in their city.

(This chart is from London but I’m sure Paris must be similar. It’s relevant here because this thread started off talking about motoring costs in London.) 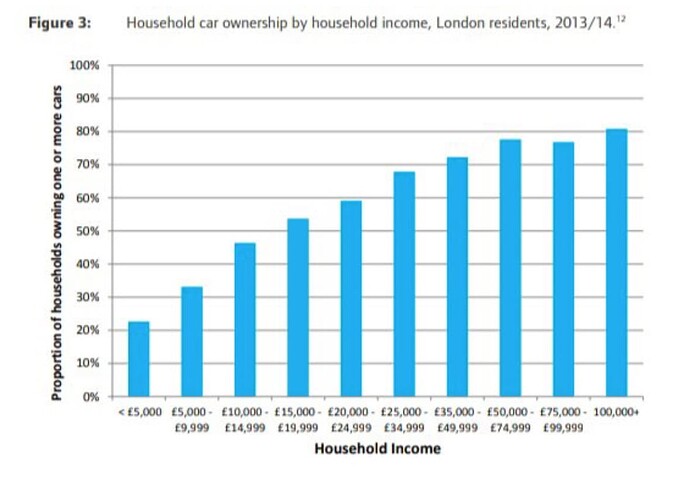 I’m astonished that anyone earning under £20k a year in London can afford a car and that graph is household income.

My wife and I would have been over to the right of that graph when we lived in London around 2013/2014 and weren’t even considering spending money on a car until we were ready to move out.

20% of households earning less that £5k have a car? That would barely cover the running costs of the thing!

that, it is a fact that car ownership correlates to wealth, the people who live in these suburbs are the least likely to own cars and will benefit most from reducing motor dominance in their city.

(This chart is from London but I’m sure Paris must be similar. It’s relevant here because this thread started off talking about motoring costs in London.)

Having a car and actually affording to run it is two different things.
Also being a banger car owner you can have a car but since they’ve started taxing them heavy for emissions I got rid of mine as it wasn’t cost effective for me to own one with the small amount of mileage I was doing.

Even to just own a car in London, you either off road parking or you need to pay a couple of hundred quid a year for parking, probably similar for road tax and you need to insure & MOT it. Probably looking at around a grand for a car you don’t use.

It’s wild isn’t it? That’s why car-centric planning that forces people to run cars to get to their low paid jobs is an equity issue. People need alternatives.

That would barely cover the running costs of the thing!

It does explain some of the sheds on wheels. I know someone lives in zone 6, so outside of any residents’ parking schemes. He lives on the state pension, no other income, his Renault Scenic cost him £800 in 2016, he does the absolute minimum on it to keep it running.

Surely the number of people who need cars to get to work in London is pretty small? I guess it’s a bit worse out in zone 6 but still, public transport is pretty good (no matter how much o complained about it when i lived there, it was usually preferable to driving)

Large numbers of people need cars to get to work. People don’t all travel in to town to work, they travel in all directions, some having multiple different work destinations.

Then there’s the small matter of dropping the kids at Guides, doing the shopping, visiting and caring for Mum…if you think you can finish work and do multiple errands on the way home…by bus…think again.

I notice amongst younger friends who have so far lived an urban life and managed without ever having driven that when they have kids they struggle without a car and rush to learn to drive.

It bothers me that there is an assumption that if you live in town you should work in town and dont really need a car. My niece is about to graduate in engineering and has a company car with her first job. She needs to travel as the sites are not in London. Must she forgo living in London?

I lived in london, worked on multiple sites (including outside london), had a kid and didn’t drive. I worked with people doing the same journey who seemed to consider a car necessary.

Of course some people will need to drive in london, i’m just surprised how many there seem to be.

I think once you have a car, the temptation is to use it all the time without really thinking if it is the best option.

had a kid and didn’t drive

Does your partner drive and have a car?

She does now but not when we lived in london. I don’t think she ever drove in London.
I sold my car two weeks after moving down ro london and didn’t get a new one until i was ready to move out 12+ years later

I think once you have a car, the temptation is to use it all the time without really thinking if it is the best option.

Sometimes that is indeed what happens. To continue talking about my friend with the Renault Scenic. He generously offered to accommodate us in his spare room while our flat was renovated a few years ago. The first weekend we lived with him we looked at Google Maps and set off with our granny trolley to do the week’s shopping at the local Tesco, it being only a few minutes walk away. My car, and his car remained on his drive.

He was flabbergasted. In the twenty years living in that house it never occurred to him he could walk to Tesco. For him, and for all of his neighbours, Tesco equalled driving. It was a fairly pleasant short walk and to be honest less effort than queuing in traffic and parking.

So I think a lot of car journeys are simply because people just don’t think. When the only tool you have is a hammer, every problem looks like a nail.

If I lived in that house permanently, I would probably only cycle once in a blue moon.

You get the traffic you design for, and since the war we have designed for the car.

There is another aspect of car/ vehicle ownership to consider whether in town or not. That is that it gives you options.

Today we took the bike to Broadstairs. We could have taken public transport; thats a walk, three trains and another short walk. When back I went to the supermarket for a weeks shop then dropped my daughter off at her friend. Absolutely no way I would have considered that all without personal transport.

So personal transport allows us to have the lives we aspire to. We could just do less I suppose?

I keep hearing from our Mayor that every journey matters…