I’ve seen some black posts, blacked out signage and black ANPR cameras in place for the 25th October ULEZ extension but does anyone know how they will operate?

Do TfL’s ULEZ ANPR cameras only collect details of the vehicles entering and leaving the ULEZ zone?

What if an owner runs a non ULEZ compliant vehicle without ever leaving or entering the ULEZ zone, how will that be detected?

Are TfL’s automatic fixed penalty notice issuing systems compatible with the 1,000’s of ANPR cameras already in operation within the A406/205 ring road?

I’m assuming here what you are saying is, if you live inside the zone and run around inside without going out of it, the yes you are highly likely to trigger a camera somewhere and will be required to pay and would be caught by ANPR as they will all be linked.

A letter from the DVLA landed on the door mat this morning advising me that TfL have included my car registration number on a list sent to the DVLA for them to advise me on behalf of TfL that my car doesn’t meet TfL’s UEZ standards and that from the 25th October 2012 I’ll be liable to a £12.50 daily charge if I drive my car anywhere within the TfL ULEZ zone.

Anyone else received such letters?

Annoyingly when I check my car at ULEZ expansion - Transport for London the viewable part of the page informs me of the Congestion Charge, not what I was looking for! The ULEZ charge information is easy to miss if you do not have the presence of mind to scroll down.

Sounds like you’re about to get a big bill if it has arrived 9 years late!

Joking aside, I clicked your link, they have changed it from when I last used it. So as I see now, when you check it will tell you which of the charges apply, i.e. CC, LEZ, ULEZ etc. My car shows as CC no ulez, my bike shows as nothing at all.

Also, just ran a plate I know is not compliant and that showed CC and ULEZ

Make sense? so what you see on there is what your car will be liable to be billed for.

My car shows as CC and ULEZ in that order. My point was the link is specifically for the ULEZ expansion zone yet it lists the CC zone first and in my case the ULEZ information is out of sight until I scroll. Just checked it again and its clearer the second time, seems I need to pay more attention.

The headline for the car comes back as ‘Two charges apply to this vehicle: If you drive within one or more of the charging zones shown, you need to pay a daily charge.’

The headline for The 250 comes back as ‘No charges apply to this vehicle. You do not need to pay a daily charge when driving in London.’

Off topic but I just got my letter from Honda yesterday confirming my 06 cbr conforms,just need to send it TfL now👍 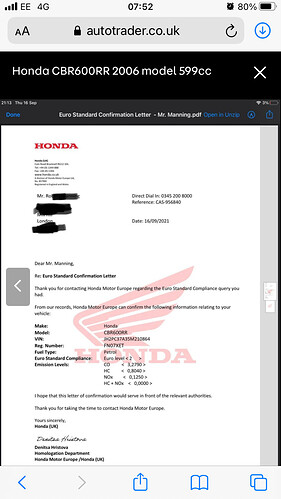 From TFL, survey at the bottom of the webpage:

We are consulting on proposals to extend the Ultra-Low Emission Zone (ULEZ) London-wide on 29 August 2023.

Drivers of non-compliant vehicles would pay £12.50 per day to drive within Greater London.

We are also seeking views on changes to Auto Pay, penalties for non-payment for the ULEZ and Congestion Charge, and changes to the Mayor’s Transport Strategy.

Additionally, we’d like to hear your views on how we shape the future of road user charging.

I did that consultation survey, I saw they’re also looking to consider charging people per mile driven. It seems TFL just works on financially punishing people into submission.
Why don’t they incentivise people into changing their mode of transport and also, why are motorcycles or scooters never encouraged? - they only recommend cycling which is great if you’re in the financial position to live close to london but for residents in the outer boroughs, cycling is not practicable, whereas motorcycling may well be perfect.

This is inevitable, given the increase in EVs.

Reducing the number of cars on our roads is the policy of all major parties because of climate crisis; sedentary lifestyle crisis; congestion crisis and pollution.

why are motorcycles or scooters never encouraged?

Because they are terrible for the environment. I love my Ducati but it produces 136.9 CO2 g/km at 39 mpg - which are awful figures. Many internal combustion engine family cars better those figures by far, and they can carry 5. My bike is also a damn sight louder than a Toyota Yaris so if I commute on it I am creating noise for all the residents along the way. Yes I know there are better commuter bikes but they still produce tyre and brake particulates, noise and pollution. It is a lot of earth’s resources to move one human.

Sadly our post-war policy of car-dependence has pushed us to live further and further away and to rely on shopping in big box retailers which we have no choice but to drive to. This has to change. It will take a generation or two, and it will be painful, but it must change.

We had a bus service, 4 times per day to the nearest city. It wasn’t at a time that could get you to or from a job there. Guess what, it has been cut due to lack of use,

Less vehicles on the road is great, but if there is no viable alternative then it is just a stick to beat people with. And at the moment there is just the stick. The cost of EVs is still too high.

Not everyone can live in towns, there just isn’t the housing stock.

Guess what, it has been cut due to lack of use,

Lack of use is because people have switched to cars.

A bigger problem is the deregulation of bus routes. Across the country modestly short commutes are impossibly dear by bus because they would involve using two or more different carriers who don’t accept each other’s tickets. That is a disgrace which needs to change.

London has many faults but at least TfL are ahead of the curve on this one.

there just isn’t the housing stock

London has only recently recovered its pre-war population level. People have chosen to move out to the commuter towns because we would all like garage space for two or more cars. Again, cars are the root of the problem. 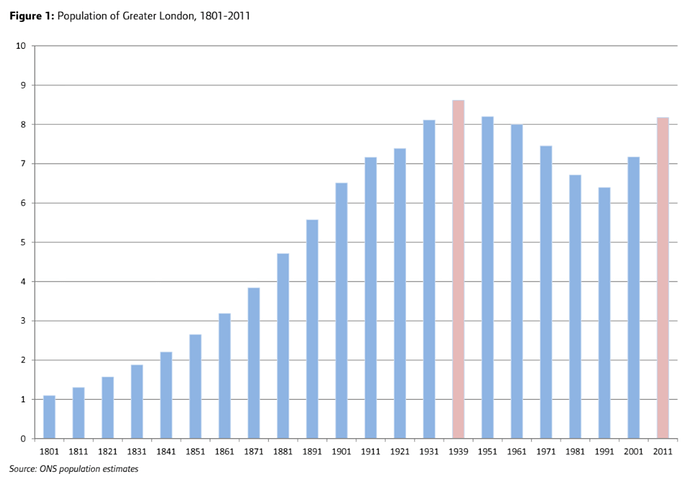 It was manipulated to be a route that was cut. The bus company didn’t want to run the route as it wasn’t really profitable for them.

We were also priced out of London by greedy landlords.

People have chosen to move out to the commuter towns because we would all like garage space for two or more cars.

Nonsense, house prices have driven people out of London. Besides the average Brit uses their garage to store junk while their £30,000 cars are parked on the drive/street.

While I agree many garages are not used for cars, many are used for bikes and the benefit is, if you have a garage on your property you normally get a driveway so still have a personal a parking space.

Most old garages won’t be big enough to fit most modern cars.

Brit uses their garage to store junk while their £30,000 cars are parked on the drive/street.