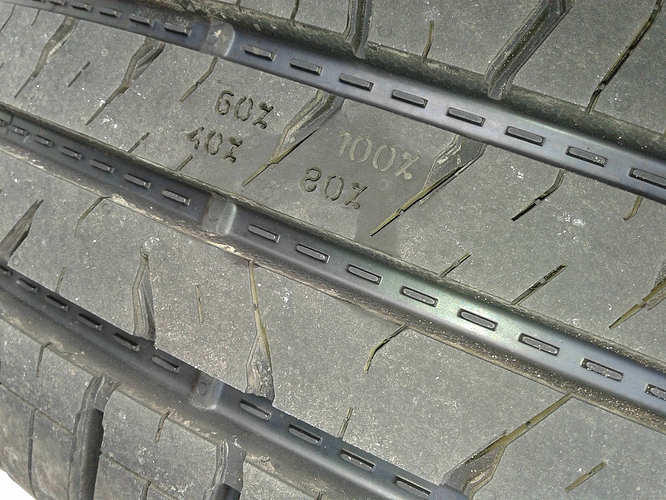 Wonder if this will make it to motorcycle tyres?

All tyres have wear indicators (includinng bikes) The bars that go across the width of the tyre are set at the mimimum depth.

This is just a variation and an addition to what we already have.

I know that T.C, but this is I think a great idea. It should in theory get you a good visual indicate of how much life is left at a glance.

The problem with the existing indicators is that they are small and hard to miss, and actually only shows that the tyre has legal tread depth.

@Kevsta, that is a fair point you make.

Personally I have never had an issue with the tyre wear indicators we have. Maybe its an age or generation thing, but I guess using the theory you apply it would reduce the opportunity for drivers and riders to plead ignorance when they get pulled and prosecuted for defective tyres or the likes of me hold them liable for contributing to the cause of a crash.

Isn’t minimum tread depth country specific? Sure I read somewhere, or maybe an old lag told me, minimum motorcycle tread depth in Germany is 1.6 mm or was that 2 mm? Whatever it was it was more than the 1 mm here in the UK.

@National_Treasure 1.6mm is the minimum tyre tread depth for cars in the UK with 1mm being as you said the minimum for bikes.

Not sure what the depth is for cars overseas. I have a few friends who are traffic Police in Germany, France and the like. I will have to ask them.

why is it lower for motorbikes?

I’ve had a search, and can find lots on the legal requirements but not on the scientific reasons for it. The limit for Goods vehicles exceeding 3.5 tons g.v.w. the tread limit is also 1mm.

The only thing I can think off, is goods vehicles are heavy so there is more friction from the tyre and therefore likely to slip. And motorcycles tend to use softer rubber and therefore it grips better.

But all of that is guess work.

Only reason I can think of is that bike tyres being narrower & curved rather than wide & flat like the ones on cars, are less likely to aquaplane.

The reality is they probably just forgot to include motorcycles when they changed the law for cars from 1mm to 1.6mm…

I think it is a European directive so I’d be surprised if they didn’t cover it.

It was decided to increase the tyre depth for cars as too many crashes were occurring because of defective tyres on cars, but the same problem rarely occurred on bikes as riders tended to change tyres sooner anyway.

But bike tyres have (IIRC) 8mm at new and being a softer compound they tend to wear much quicker whereas cars use a much harder compound and (again if I recall correctly) about 10mm at new and so the depth could be raided for cars and bikes were left alone.

It was nothing to do with EU, it was a BSI directive that required the changes to be made.

Bear in mind that a bike with a 49cc engine or smaller (which covers most mopeds) has no minimum dread depth, it just has to be visible. 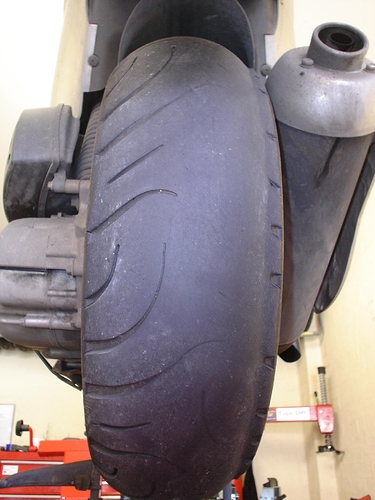 This is perfectly legal on a 49cc engined bike

As well as the large flat tyre shape, cars are also more susceptible to aquaplaning because of their more aerodynamic profile, which can cause a little amount of lift from the air pressure differential. Especially as many now have a somewhat similar shape to an aeroplane’s wing,

The EEC directive though specifically only requires a minimum 1.6mm tread depth on vehicles with at least four wheels that have up to nine seats for passengers, and for goods vehicles and trailers up to 3.5 tonnes.

I think few, if any, any other member countries had a limit that high at that time either so it seems a bit odd that they left requirements for other vehicle categories to domestic governments to legislate. But it suggests there must have been specific issues in that range, such as aquaplaning risk, that prompted it. Like bikes, larger buses and lorries are also less likely to aquaplane than cars, this due to their shape, weight, and legally limited speeds.

Incidentally, the British government originally opposed the EEC proposal of a 1.6mm limit but passed it in the end. So that may be partly why we did not change the law for any other vehicle categories when implementing the eventual directive into British law.

This is perfectly legal on a 49cc engined bike

That’s my thought. Well more along the lines of …what the fuck!

really glad to have you on TC … you do come up with some interesting stuff !

(this was meant to quote reply the scooter picture)