After 2 years working from home, I returned to working in London 5 days a week in June

During the pandemic I sold my then commuter (which I adored) - a gen 1 GTR1400.
I was riding my VFR1200F for the first 6 weeks while I looked for a new commuter. I bought a TDM900 as I’d had one as a commuter before and enjoyed it thoroughly.

I hate this one. It took me 5 minutes to remember why I got rid after 30k miles of faithful commuting last time around. In order they are; jerky fuelling is unflattering, cable clutches, wind buffetting, weak headlight, chain drive

I love everything about my VFR12. It’s narrow, the headlight is great and running lights on mirrors make you super visible, hydraulic clutch and shaft drive, great aero makes for untiring riding on the dual carriageways, brakes superb, effortless progress.

It is a bit juicy. During the summer holiday commutes with the roads clear I was getting only 33mpg. Fuel prices have come down a bit, but recent prices mean that 16k commuting miles per year at 33mpg is going to cost me more than the comfort justifies.

Thinking about selling both bikes, to replace with one “do it all” bike, and maybe a 660 tenere down the line for that Iceland or Morocco trip I’ve been saying I’ll do for years.

I’d always said if I were to replace the vfr, it would be with a gen2 zzr1400. Much like my old GTR, this is probably going to be not much better on fuel. The old gtr wasn’t perfect; it was wide and now working in Soho, there’s quite a bit of battling through the tight stuff that needs to be done between there and the blackwall tunnel. The most troublesome thing about the gtr was those super effective wingmirrors, which were at a tough height for car wing mirror clearance. Apparently the position of the gen2 GTR wing mirrors is an improvement

While I don’t need 150+hp, I do find it useful. Having a sports touring position and protection, nice visible headlight, and hydraulic clutch are more important to me.

On my way to and from work on Thursday I rode in with a guy on a 2007 K1200GT. A bike I’d never so much considered, BMW stereotypes and prices I guess, it cut a svelte figure in my mirror and had the presence of the bikes I miss commuting on. “Bet it’s crap on fuel” I thought to myself, but checking fuelly suggests ~50mpg is possible which really does make it appealing. Lots of the ones I’ve looked at on fb/ebay have had their ABS removed as apparently this is a common and expensive issue. I’ve not really owned many bikes with ABS anyway, but I am not getting home till midnight most nights and the security policy of ABS against my tired mistakes is a nice to have, despite current TDM not having it

Ideally I’d not spend more than 4k on a motorbike. These days though, that doesn’t get you much. After being rear ended stationary at a crossing last year, the VFR was written off, I bought it back salvage and had it fixed. Because of crazy prices, the difference between fixing it and what I was paid out made the bike free based on what I paid for it originally. Because of this, it does seem ridiculous to me to sell it (and in fact I have had it up for sale overpriced for months and not so much as a message)

Chains I guess are okay if there is a centre stand but I can’t abide by cable clutches anymore → I’ll briefly explain that this is because of that biting point wander cable clutches seem to develop throughout a commute with expansion, and while it’s probably only every couple of months the frequency of adjusting them irks me. They also tend to be heavier than hydraulic ones, and having a non tiring ride in to work has jumped to the top of my priorities.

I used to be a huge fan of adventure bikes, but because of their wind buffetting, vague front wheel feel and brake dive I am more keen on sports tourers these days.

I might not buy a new bike, but it does seem to be all I can think about so I am considering it strongly.

Hopefully that’s enough of a brain dump to distill what I am really after with the next commuter, and I’m sure this is something others have had to think through in the past

Consider a Ninja 1000SX or its predecessor Z1000SX, which is almost the same. I’m getting the mid to high 40s mpg, with the occasional 50+ mpg. Adjustable screen, comfortable riding position, lockable panniers, cruise control, heated grips. I love it.

For a sub £4,000 sports tourer look no further than the much over looked Honda CBF1000, the 2006-2009 models will get you +50 mpg, the later face lift model will get you +55 mpg and those are all day long numbers. Buyer beware of the over priced new old stock of both models that were late registrations. Twin exhausts, silver engine is the early 2006-2009 model. Single exhaust, black engine is the later 2010-2013 face lift model.

Both have around 100 hp, hydraulic clutch, chain drive, most have ABS with combined front and rear braking off the rear pedal. For your £4,000 you should be able to pick up one with full luggage for touring, remove the panniers for London filtering.

Thanks this is great knowledge, I quite like the look of the 06-09 model that is truly fully faired, with later models’ fully faired option being more belly pan than full lower fairing. There is a red one on superbike factory with all the luggage as you say for £4k, it is tempting for sure - good suggestion, I would have completely overlooked it as you say

These are very smart looking bikes; it’s a cable clutch right? How firm would you describe it as? One thing that really puts me off is that a cursory glance on internet suggests a centre stand would not be possible

The 25 miles of my commute closest to home (A2 gods willing) are spent at 80-90mph. Is there a danger that fuel economy could drop into high 30s, low 40s with that kind of riding?

Standard both models come with half fairing only, the lower fairings are mostly after market add ons.

I don’t have the lower fairings on mine and don’t see any need for them, feet and shins seem to be out of the wind stream and get bathed in heat radiating off the engine. Well worth the mild annoyance when sitting in city traffic in the summer for the benefits in winter. 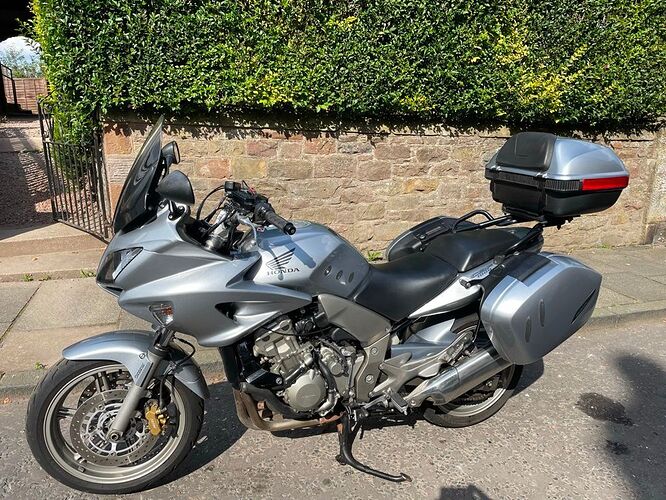 and others, the red one from the Super Bike Factory looks top dollar for the earlier model but it is dressed to impress with less than 9,000 miles. 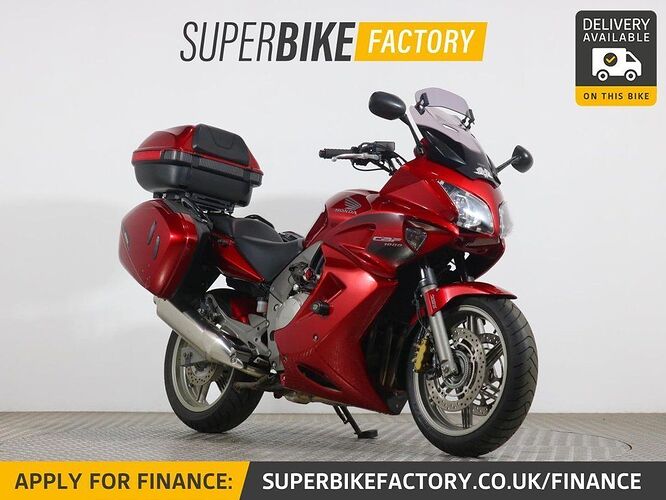