I swear, any maintenance task I do on the bike, something is always ridiculously stuck. This time it’s the impeller on the shaft inside the water pump. The Haynes manual says unscrew the bolt off, take out the washers (which I did), and then simply lift off the impeller off the shaft. Of course, it’s not moving a millimetre when I try to lift it off, been trying for an hour (it’s not exactly easy to grip without damaging either). I was tempted to shove a screwdriver under the impeller to pry it off, but according to the manual if the back of the impeller is pitted then you have to replace it. 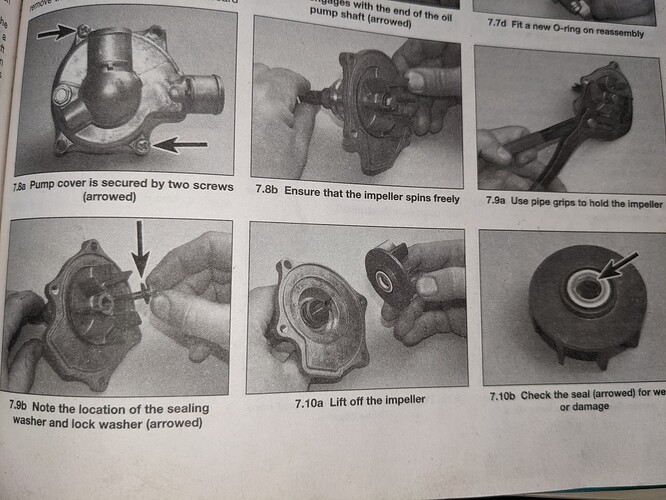 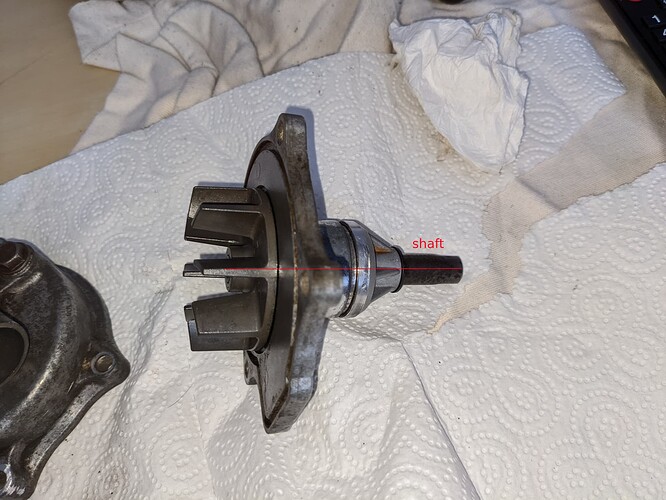 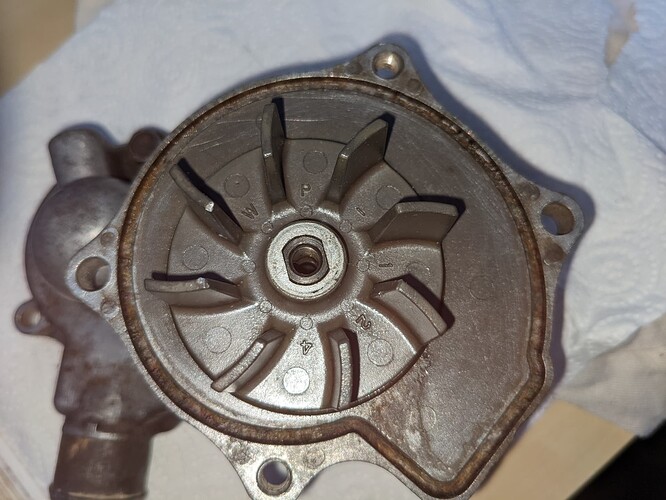 Some impellers are a pressed taper fit and not designed to (easily) come off the shaft.

Why do you want to remove the impeller?

Hmm. The manual would normally (at least it has so far) mention if something wasn’t designed to come off, and if any tools/sprays might be needed. But here it just says “lift the impeller off”.

There is a small coolant leak behind the water pump. According to the manual, if a mechanical seal behind the impeller fails, coolant will be drained from the hole on the underside of the pump. I took a pic under the bike with pump in situ, and it appears the leak is exactly where the drain hole is. 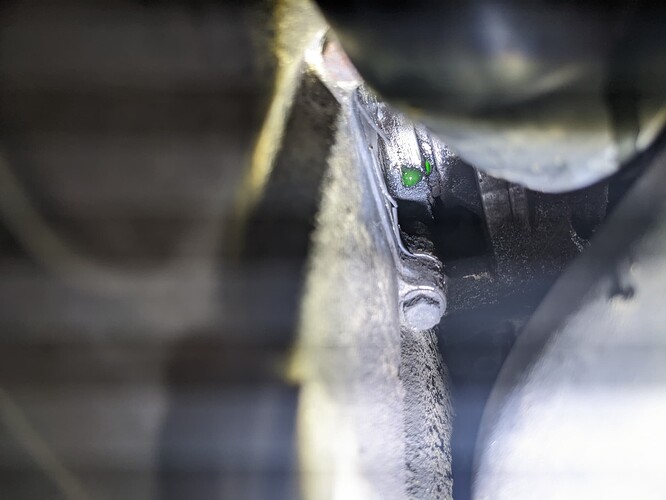 Tried penetrating oil overnight.
Putting the bolt back inside and gently tapping it with a hammer.
Would heating up the impeller with a blowtorch be worth a go?

Hammer would be my first action. Put the bolt back in almost all the way, put a plastic or wood (not metal) pry wedge under the impellor with a little pressure to pop it off. Tap the head of the bolt with a hammer.

How about heating the impeller with a hairdryer instead of a flame? My thought behind that is where a naked flame may cause damage, there is probably less risk of that with a hairdryer.

One random odd drip of coolant from the water pump’s mechanical seal inspection hole is normal, its what mechanical seals do, they leak because they are not perfect just a better solution than wadding or packing to seal a rotating shaft in a pressurised system. If the odd random drip becomes a dribble then either the mechanical seal, water pump or housing has failed.

Tried hairdryer and some boiled water. When that didn’t work tried the blow torch, then put some wooden door wedges under the impeller and again tapping on the screwed in bolt. Still nothing.

Went for a bit more brute force. Found a bolt that’s bigger than the shaft thread so it sits on top of the shaft, and is still smaller than the impeller opening. Then wacked it with a lot more gusto than with the threaded bolt. And, it did go through, so far nothing appears damaged. 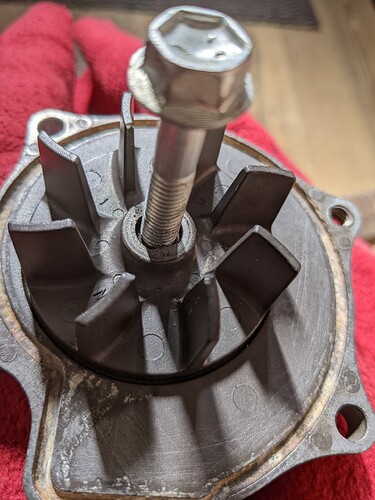 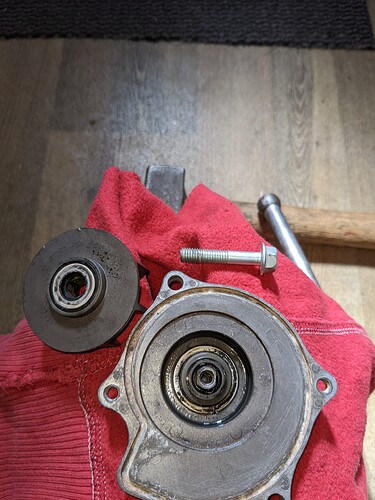 The last problem now is getting the mechanical seal out which, as the theme goes, is desperately stuck. When I was changing my wheel bearings I got the bearing out with a screwdriver and a hammer. Here, however, the opening is much smaller and I can only get the tiniest of screwdrivers and it’s not really doing anything to it. I might have to actually order up a bearing puller for this. There is the metal part stuck out of the seal which I can grip with some pliers, but again, no amount of pulling and twisting seem to be doing the job. 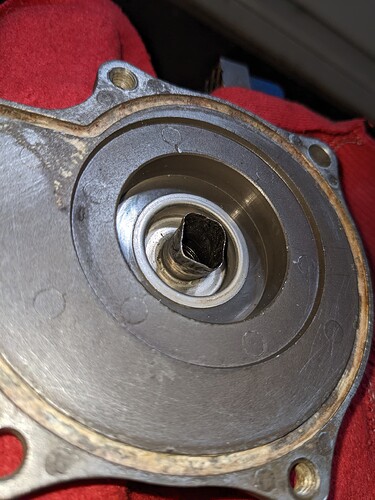 One random odd drip of coolant from the water pump’s mechanical seal inspection hole is normal, its what mechanical seals do, they leak because they are not perfect just a better solution than wadding or packing to seal a rotating shaft in a pressurised system. If the odd random drip becomes a dribble then either the mechanical seal, water pump or housing has failed.

It was definitely more of a dribble than a random drop. I would find a very small puddle under the bike virtually any time I parked it up for a few hours.

Or you could try levering it out with a screwdriver, its scrap so you ain’t gonna do it any harm, knock the new one in with a suitable sized socket.

Do you mean where the seal sits on top of the pump body? Which I guess would scratch the pump body and wouldn’t be great.

Or going from the top through the neck of the seal and levering the bottom of the seal? In that case I might need to cut off the neck as the angle of screwdriver would be too steep for gripping the bottom. 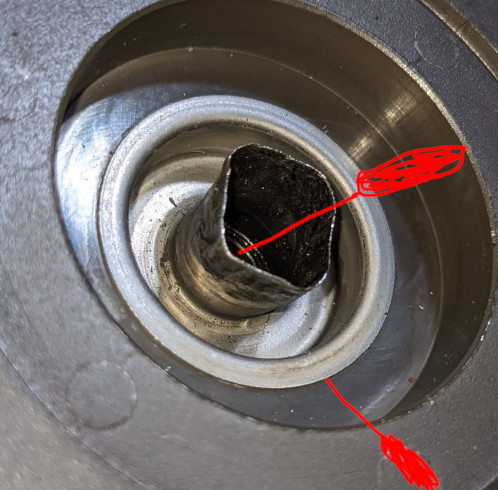 At the edge of the seal cup but not into the pump body, the idea is to deform the shape of the cup. Place an old flat blade screwdriver as flat to the seal cup as you can and strike it with a hammer towards the seal neck to deform the cup, work your way around the circumference deforming the cup into a square or hexagon at some point the cup should break free.

Ah, got you. Luckily, I’ve managed to temporarily secure a proper bearing puller tool, as I’m sure I would have screwed that up somehow

Even then, though, it initially took some heavy wrenching to crack it loose. But, it’s out thankfully. 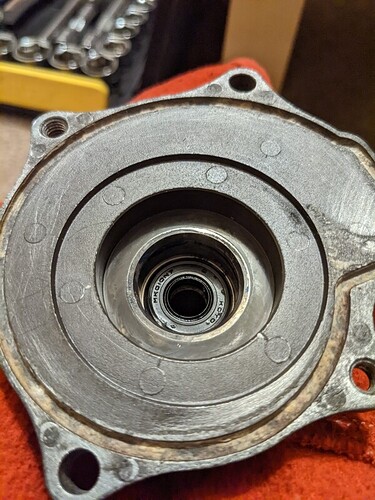 New one in. Other seals also replaced. Oil and coolant refilled. A few rides in, and so far: no leaks, no overheating and no shrapnel from an exploding water pump in my leg. Fingers crossed it lasts.

Thank you for the help