I’m too young to remember Simon Dee on the box - but his life is a reminder (particulary in the current time) of how one minute everything is going your way and the next minute your on dead end street.In the words of Marc Bolan - 'Life’s an elevator - it goes up and down. . . ’

The rise and fall of Swinging Simon In the mid-1960s, Simon Dee, who has died at the age of 74, was one of the biggest stars in the country. But just a few years later, he suffered a sudden and spectacular fall from fame. 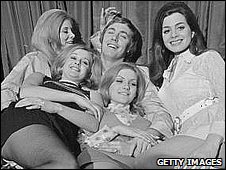 Dee had cameos in the films The Italian Job and Doctor In TroubleAfter Dee hit TV screens in 1967, he was a household name leading a playboy life.

His Dee Time show was watched by 15 million people and his casual, cocky, manner made him the embodiment of the Swinging Sixties.

In the process, his style paved the way for future chat show hosts from Michael Parkinson to Chris Evans.

But by the start of the following decade, it was all over. “Everything just disappeared,” he later said.

Dee went to public school in Shrewsbury with John Peel, before another schoolfriend decided to launch a radio station on a ship in 1964.

Dee was the first recruit and the first voice on the first offshore pirate radio station, Radio Caroline. Born Nicholas Henty-Dodd, he had changed his name to sound less posh. 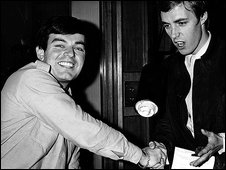 Tony Blackburn and Simon Dee helped launch of BBC Radio 1 in 1967His popularity led the BBC to offer him a show on the Light Programme - before the days of Radio 1 - making him the first pirate DJ to move to the corporation.

He joined Radio 1 when it launched in 1967 and got his big break on TV the same year.

He was spotted advertising crisps on TV by the mother of BBC executive Bill Cotton, who recommended him to her son.

The resulting show, Dee Time, was a huge success, bringing a mix of music and chat to tea time audiences.

“By the second year there’s no doubt that he was one of the most powerful people on television,” Bill Cotton later said. “He had great influence on the young.” 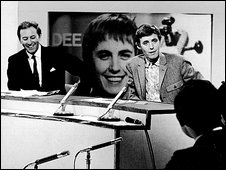 Simon Dee faced viewers on the BBC’s Talkback programmeHe presented Top of the Pops, hosted Miss World and got small roles in films including The Italian Job.

At his peak, he even started preaching his views on a range of subjects, from racism and religion to showbiz, in a regular newsletter to his fans.

But as the voice of youth, he was not a hit with all viewers.

Referring to Dee, a gentleman on the BBC’s Talk Back programme in 1967 complained: “Our declining standards of morality are due to the filth we see on television.”

And in 1969, he was at the top of a blacklist drawn up by a society aiming to stamp out the use of the phrase “yunno” on the airwaves.

Away from the studio, he did not shy away from tackling difficult issues, whether giving a speech against Enoch Powell, criticising Prime Minister Harold Wilson or campaigning against nuclear testing.

His downfall began when he came to renew his contract with the BBC in 1969. 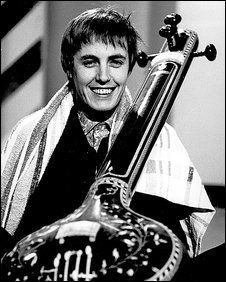 Dee Time ran for two years on the BBC"It had got to the stage where his ideas of his own importance were actually quite damaging," Cotton said.

Cotton did not want him to stay and reportedly offered him less money than his previous contract, leading Dee to defect to London Weekend Television.

But the show never hit the same heights and Dee’s self-importance bordered on self-delusion.

The end came after he conducted an incoherent interview with George Lazenby, in which he named the US politicians he believed to be responsible for President Kennedy’s assassination.

The show was dropped six months into a two-year contract, to be replaced by a variety show fronted by Cliff Richard.

Dee himself believed the decision had more to do with his rivalry with fellow LWT host David Frost and his criticism of Harold Wilson.

His claims that his phone was tapped by security agencies seemed far-fetched, but documents later released proved that his calls were being monitored.

After going on the dole, he hit rock bottom just one year after his last show. In 1971, he was fined £10 for attacking bailiffs sent to make an inventory of his home in Chelsea. 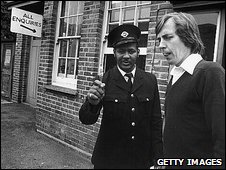 Dee got a job as a trainee bus driver in 1975He wept as he told the judge he had no money and was drawing £6.90 a week benefit to support his wife and three children.

“Everybody wants me back [on TV], except those in power,” he claimed.

A job as a trainee bus driver, earning £50 a week, did not last long, and he had regular run-ins with the law.

Appearing in court on the charge of stealing a potato peeler, the presiding magistrate facing Dee was none other than Bill Cotton.

After Cotton fined him, a fellow magistrate commented on how unpleasant the fellow was. “Not really,” Cotton replied. “At one time he paid my wages.”

Brief mentions in the press at the end of the 1970s and the early 80s described how the “former disc jockey” was accused of insulting behaviour outside 10 Downing Street and assaulting a policeman outside Buckingham Palace.

Sporadic attempts at a comeback on TV or radio fell flat as Dee fell out with successive employers.

There were occasional sightings on TV documentaries or in newspaper interviews. Otherwise, as far as the public was concerned, that was that.

But he will be remembered as someone whose star shone very bright before burning out.