Riding or driving abroad this summer?

If you are planning to ride of drive abroad on holiday this summer, do you know the rules of the road for the countries you will be riding or driving in?

If not, then maybe my latest blog may help, written with the assistance of my colleague Paul McClorry who is a specialist in overseas claims and road crashes abroad.

If riding in rural France, well worth 5 mins familiarizing yourself with the local signs (2 of each) that let you know who has priority at junctions / roundabouts.

Ref filtering, I found the Dutch incredibly helpful, the Germans incredibly unhelpful. Presume (don’t know) legality of filtering is different in Holland/Germany. Also for those tempted to undertake, Germans hate it and will definitely react, try and prevent this. Presume it is illegal there given their strong reactions.

On the spot fines, if you like to risk it, make sure you have the cash as fines can easily be over the 300 euros you can get from an ATM. And be prepared for fines in the post from fixed cameras. I checked the colours of cameras on Google, but there is no uniformity here. Pain in the arse if you are touring.

In The Netherlands on an equal priority junction remember to give way to the right (and you have priority over the left). “Give to the right take from the left.” If you are un sure then approach the junction slowly so as you don’t get in an accident like these ignorant bell ends driving in Germany (same rule). Video should have been titled, “I caused an accident because I’m ignorant.”
On a serious note, local drivers will confidently take priority so you can expect this if you just drive onto a junction.

All good points, thank you for that.

I am just trying to provide an overview and give examples so that it made people aware of the importance of researching different countries before attempting to drive in them.

I could not cover everything and every country for an article. People will be asleep in less than 2 minutes

Roundabouts (squares etc - not that many) in Greece, priority is for the person entering the roundabout 9 times out of 10.

I was here last week and got a bit of a surprise when a car came ‘flying’ out of this side road onto the ‘main’ road I was on (me travelling the same direction as the photograph is taken). He was correct, he had priority. Luckily no harm done. I was more aware the next time. 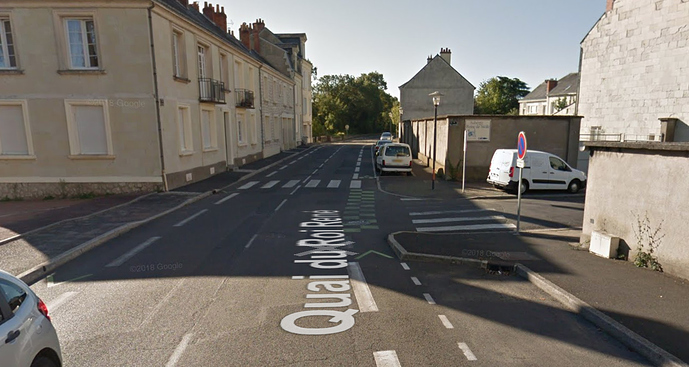 See my point about the signs. Key ones to look for are the yellow diamond with a ljne through it, and an ‘x’ in a triangle. Both mean priority from the right and as you found, the locals will pull out, even from driveways.

More common on smaller roads and in towns…

See my point about the signs. Key ones to look for are the yellow diamond with a ljne through it, and an ‘x’ in a triangle. Both mean priority from the right and as you found, the locals will pull out, even from driveways.

I’m aware of those signs and I’m usually on high alert when I see them but I don’t remember passing either in this case. I think it is assumed because it is in a town that people should be aware of priorité a droite.

I think the best is, as ever, to ride defensively and assume people will pull out on you. I find myself checking every side road for a Give Way line as I approach it. If you don’t see a Give Way line then traffic “pulling out” of that road has priority.