I think it looks quite fun!

I wouldn’t have the technical ability to build one, but maybe someone else can put together an LB team?

I’ll probably try and make it along with my camera if nothing else.

That would be a great laugh. I did one (not Red Bull) years ago that was a 24 hour endurance race. Our cart was built from Dexion (industrial shelving stuff). It was brilliant fun - great memories.

I’m in. Just need a few others lol.

As I said, I can’t really offer anything, other than documenting the work and the event

Who has a garage with enough space?Who has access to parts?Who has design ideas?

Some parts and design I can perhaps provide…

Being a biker forum can anyone design a crash helmet on wheels:D:D:)

Being a biker forum can anyone design a crash helmet on wheels:D:D:)

Ooooh. I’d be in. I have a small amount of space in the garage (must take bikes out) but have a large garden and tools. We would just need a welder. I could figure out the welding part

How about asking OMC to sponser the cart? They let us use their tools and space, they then have their name down the side of it? That’s relatively central, so good for most people, no?

I have an old mountain bike that’s reached the end of its useful life. I’ll probably take a few bits (probably just saddle and pedals) off for the next project but I’d be happy to donate the rest if it’s of any use. It’s only going to get scrapped/freecycled otherwise.

How about a an outfit.

This is one my friend uses in the same sort of event up north. it’s made out of two C90 frames.

you would have to use cycle parts to keep the weight down to meet the Red bull rules.

and maybe with some fairing to make it appear more like a motorcycle.

you would have to use cycle parts to keep the weight down to meet the Red bull rules.

and maybe with some fairing to make it appear more like a motorcycle. 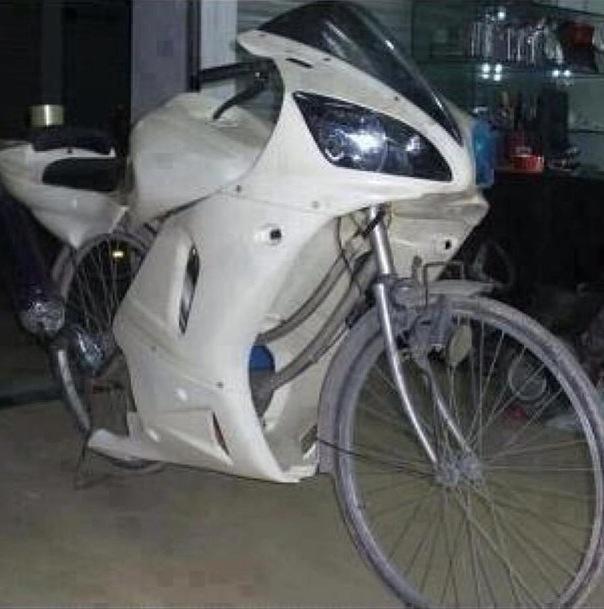 I thought there might be a rule about it needing 4 wheels, but apparently not…

Your human-powered racing machine must not exceed a maximum of 2m wide and 5m long, be at least 10cm from the ground and no taller than 2.5m. It must not exceed 80kg in weight (excluding the driver, of course).Soapboxes must be powered by the force of gravity and your imagination only. So no stored power or external energy sources are allowed. But that doesn’t mean you won’t go fast so fully functioning brakes and steering are required. Modified prefabricated cars, kit-cars and vehicles such as bulldozers, steamrollers or tricked-out minis are not allowed.

I did tweet this thread to OMC, but no response

I spectatored that event a few years back. It was a good chuckle although choice of soft drinks was very limited if you don’t like red bull. I don’t have time for much involvement but if any welding needs done, if it’s all prepped and ready I can throw some snot at it.

I have a large garage that we can use… Is in Carshalton and got a wide selection of Tools, tea, coffee, biscuits and curry and beer if prior warning is given !! :D:D:D:D That is unless somewhere else has been decided…

EDIT…Oh, would need a little bit of notice for a tidy up !!

So the SoapBox Race is today, I’ve had a look on their site and it says you need tickets which will be available from the website in May… but I don’t see how to buy them :ermm:

Also it says there’s no parking and to use public transport.

Maybe I’ll give it a miss…

i think they sold out, that’s why you could not see a link.

I was there yesterday and it was a blast. If it comes around get your tickets early! Only a fiver, but bring your own food and drink (non alcoholic) because the prices are pretty steep.