I took a Triumph 675 for a test ride shortly after it first came out…and came >THHHHIIIIISSSSS< close to trading my GSX-R750 for one. Well…I decided to keep the 750 and rode it for the rest of the season before selling it and buying the M109-R.I regret not taking my wife’s advice now…she TOLD me that I would miss having a sportbike and that I should buy the M109-R but keep the 750. I wanted to take some of the edge off of buying the new bike and sold the 750…and uh…I DO miss having a sportbike…

I think the 2008 Triumph 675 in black would fit the bill PERFECTLY. drool 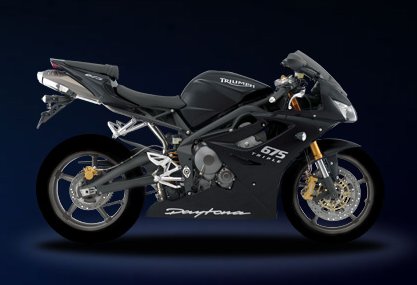 I knew there was hope for you yet…

I’m thinking of dropping by Bikers Edge over my lunch hour this week to see if they have any of the 2008’s in yet…and having one out for a test scoot, if so.

Probably not the best idea, though…having a test ride is just like foreplay…it’s never enough…you’ve always gotta keep on for the finishing move. :laugh:

just make shure you keep the front wheel on the ground son!

just make shure you keep the front wheel on the ground son!

Oh no…ride it like it’s INTENDED to be ridden…like you would ride it if you owned it.

I live over in Topeka and I know of three 675’s running around Topeka right now. Always loved this bike. Nice looking, nice sounding. Two of the 675’s I know about in Topeka are purely track only bikes and I think they compete well against the Jap bikes on the track.

the 675 hasn’t been changed at all since its creation other than colour schemes. The bike itself is 100% the same. Could save you some pennies to get a low mileage '06.