Pulled over : Invalid licence : No CBT

So… I got my original licence 1994. Passed my car test 2004. Been riding a 50cc in and around London for years. Everytime I get pulled over by the police for their random stops, I hand in my licence, they check it on their computer in the car, or their handheld gizmo. Everytime they say my licence is valid, give me some excuse about riding safe, or checking for teenagers, etc. Then send me on my way… Today though… Pulled over, copper in white hat tells me he’s a traffic cop. When he runs the checks, then tells me my licence is invalid. Why? Because I don’t have CBT. I agreed with him. Never took it, wasn’t supposed to because the laws changed after my licence. He then radios to HQ, they then confirm what he says. He goes to his rule book, shows me the bit of law. So I ask why every other time, every other copper runs the same tests and tells me my licence is fine. Then you tell me its invalid? He doesn’t have an answer… So then sizes my bike, off to the Local pound. Then tells me it’s 3 points and hundred quid fine… Obviously no point arguing with a copper at the side of the road… Now I need to do CBT before I can ride again. Also got to pay 150 for bike release. Got to get it taken with a van , can’t ride it home. Now booked in for CBT on Monday, another 124 quid… Then this white hat copper tells me I need to keep renewing my CBT every 2 years. Really? That’s not what dvla said? He then says it is… Again, not worth arguing with a copper! So… Anyone had similar and know the ACTUAL truth? Was it a mad copper? A vengeful copper? Was he right?

What is original license? If you passed car driving test before 2001 then you don’t need CBT.

What nails said, white hat guy is also bang on. CBT only lasts 2yrs then you either renew or take a full/restricted test.

If as you say you have been tugged a number of times I’d imagine that there is some sort of record to show this.

Also if I’m not mistaken on the back of your DL shows the classes of vehicle you can drive/ride if it is not on there I’d say you’ve just been seriously lucky until this point.

Maybe my luck ran out today then! I checked the dvla/mot site tonight and it was saying whichever way you take it with full car licence and CBT, or other way round, you don’t need to renew the CBT. Once you’ve done it, it automatically give you full moped upto 125cc. My licence back in1994 was original provisional. Couldn’t be bothered with a car until had kids. Seems strange that all the other times I’ve handed my licence in that they’ve always said it’s okay. Yeah, there must be a record of people looking at your licence somewhere. I’ve logged it on the met police site asking for clarification. I’m not going to fight it or go to court or anything, it’s just annoying and a waste of money. I was thinking about a bigger bike anyway for commuting to Maidstone each day, so would’ve had to do a CBT sometime…

On the back of my licence is A, A1, A2, Am, then fklnpq, I remember having the same conversation with dvla few years back when I was considering a bigger bike then as well, and they said I only needed CBT if I was going over 125, so I didn’t bother…

I expect the problem is that you never did the full driving license, so you aren’t covered by the pre-2001 rule. The CBT only lasts 2 years before you need to renew it- they tell you that when you go to do your CBT. My boss also got pulled for not having renewed his. I’m more perplexed about why you’re ‘randomly’ pulled over so often…

On the back of my licence is A, A1, A2, Am, then fklnpq, I remember having the same conversation with dvla few years back when I was considering a bigger bike then as well, and they said I only needed CBT if I was going over 125, so I didn't bother...
LondonFoy73

As you say, the officer was wrong about the CBT, though.  You only need to do it once to endorse those categories for the full life of the licence.

It could be the previous times you were stopped they just looked at the entitlements without realizing or checking for a CBT certificate?

Commuting between Maidstone and London on a moped though?  Crikey.  No wonder you get randomly stopped so often.

. I’m more perplexed about why you’re ‘randomly’ pulled over so often…

So your 1994 provisional is 4 years after the introduction

You have just been stopped by officers who were not knowledgeable in the rules but a white top …thats his speciality .more likely a biker to and will have an intrest in bike law . 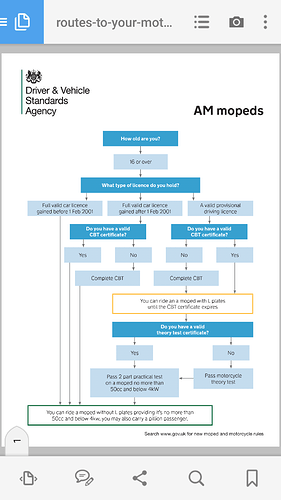 Wow, that flowchart is useful, thanks. I only do the moped in and around London. I was considering a bigger bike for the Maidstone run. Because its a cheap Chinese import, and because I live and work around southeast London, they’ve had lots of youths nicking mopeds and doing petty crimes. They always suspect that I’ve stolen it! There’s also a lot of police stop and check on brownhill Road near Catford, just because… The white top guy did say he was a biker and we chatted about the police issue boots. Best there are! I’ve got all my papers together and was going to try and get the bike back today. I’ve got a mate and a van, so I can collect it rather than ride it, but looking in the instructions, it’s talking about provisional riders need to produce the CBT for collection, and it so talms about having a valid licence for ID. There’s nobody to talk to, but I’m wondering if I’ll even be able to collect it until after Monday when I get the CBT?

Once you’ve got the CBT you have two years to pass your test. Note the test fee is cheaper than the CBT fee.

One thing missing from the flow chart, if you passed your car driving test (or moped test) after sometime in January 2013 you can only ride a moped with a maximum design speed of 28 mph (45 km/h) whilst if you passed before that you could ride one designed for up to 31mph (50 km/h).

Probably deemed a trivial point though as I assume all mopeds now sold here are based on the newer, slower, definition anyway.

Nor that it applies here either.  The little ‘p’ entitlement is added to the AM (45 km/h) to make up the difference to the old definition (50 km/h) which had a big ‘P’ entitlement.

Once you've got the CBT you have two years to pass your test. Note the test fee is cheaper than the CBT fee.
National Treasure

For a 125, yes.  Always seems strange to me that people keep renewing CBTs when they should be able to do the full A1 tests on their own bike without needing any extra training.  Much cheaper overall.  Although someone once told me he has been redoing his CBT for years as he could not pass the theory test.  So maybe that is what they are avoiding?

For the tests for anything bigger though it is pretty much impossible to do the test without going through a school and paying their fees.  Even if you can get a bike to and from a centre without riding, it will be a big struggle to find anyone willing to insure you to ride it.

And you cannot do the moped tests if you hold a car licence.  You need to do the CBT to be able to do the tests, but doing that endorses the entitlements anyway so the test is no longer necessary.