This should make your day, know you love a good polite Jacket story. 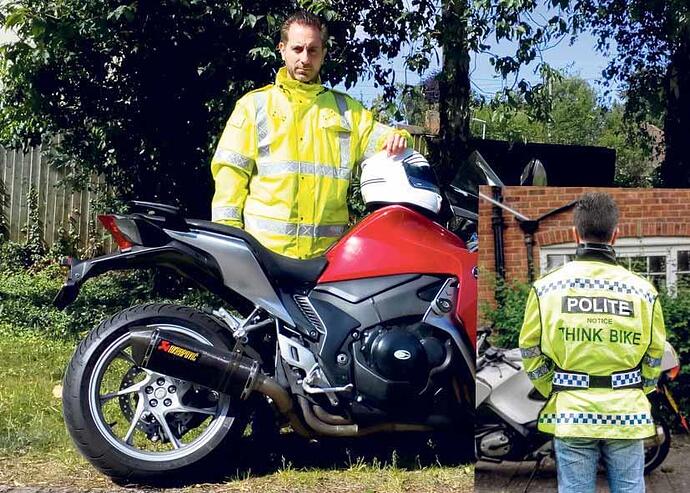 A motorcyclist is urging others not to use a POLITE vest, after wearing one caused him a legal battle.

Excellent. The only reason people wear them is to deceive so it’s good to see some repercussions. He was clearly going for that look with the bike and the white helmet too.

He was clearly going for that look with the bike and the white helmet too.

Yup, I have to say that was the first thing I thought of when I read it.

The funniest thing of all is that the police had let it go, but because his ego got in the way he wouldn’t let is lay. Call me cynical but all seems very self imposed. Should have walked away while he had the chance.

I wanna feel sorry for him… I really do. Because it’s his life ruined…

But I just can’t. Those things just annoy me that much that I can forgive the overzealous police who took it too far because he complained. Their actions are pretty shitty as well, proper wanker vindictive jobsworth mentality

But he wore a polite vest…that’s inexcusable

His biggest crime was riding the ex-Police R1200RT

Hilarious. I hope the prick that cuts people up on the A3 gets served too

Think you might be right there, oh and welcome to LB @H0nda

The M.C.N. are just as guilty of “sexing-up” this story as the brief conviction was not about a Polite vest.

Also, his defamation lawyer’s did not mention him only being prosecuted after complaining to the police in their “true facts,” so who knows what to believe.

Anyway, today “Mr Emanuel has told the Bucks Free Press that he has started a legal claim against the police on grounds of ‘malicious prosecution’ and ‘misfeasance in public office’.”

The M.C.N. are just as guilty of “sexing-up” this story as the brief conviction was not about a Polite vest

I think he knew exactly what he was doing if you ask me!

if he was so “concerned” with safety, why only get white helmet. IT is widely regarded that a helmet should have two colours a light and a dark.

If that is true, it is certainly not widely known. I have never heard that before.

Everything I have read has said solid light coloured helmets are better, white is the safest, and better still is to have reflective patches. The only actual research I have seen cited is a New Zealand study which looked at the proportion of accidents by helmet colours and found the fewest correlated with those who wear white ones. Though I think they only looked at solid colours.

So if a combination is more visible, why do the police only wear white instead of that?

Buit I was not defending him, there is no way he could not have known how he would have appeared to other road users.

Though I think they only looked at solid colours.

Solid colours, on helmets or on clothing, are going to be more visible than anything patterned however garish the colours might be. Anything in patterns is what the army refer to as Disruptive Pattern Material, or in other words: camouflage.

Solid colours allow others to quickly recognise your shape as belonging to a person.

That is what I would have expected. Mind, if someone cannot see a bike and rider then I am not sure any helmet design will make much difference.

That said, the most visible helmet I have seen was a dark brown one like this: