In late 2005 police across the southern counties had several reports from animal owners claiming that pets and outside dwelling animals had fallen victim to possible sexual attacks. Police firstly thought that the attacks against the animals were unrelated as some were committed on the same nights but were around fifty to eighty miles apart, sometimes up to a hundred miles away from the first reported incident. These sometimes gruesome sexual attacks on animals ceased early into 2008 and had left police baffled and without any clues. In the summer of 2010 police were alerted to reports from elderly dog walkers in the Catford area of London involving Dog Snatching the assailant favouring small terrier breeds police believe that the size of these dogs made it easier to grab and run. Some of these dogs have been found alive others have been found choked to death the only pattern is severe anal trauma.
Back in the atumn of 2005 police were investigating one of the first attacks to a three year old horse called Mabel, she had several implimets including a bicycle pump an edition of car tuning mag Max Power magazine and what turned out to be Suzuki GSXR slingshot front sprocket and standard exhaust silencer all inserted into the rectum and Vagina, The horse which had been made to stand with its rear legs in a used motorcycle tyre to prevent the animal kicking out, although the tyre had been clearly used it only seemed to be worn in the middle with the outside tread seemingly brand new the police unaware of how important this clue would be later on in the investigation. Unfortunately the horse died shortly after due to a heart attack vets did say it could of been stress linked to the incident.

During that investigation police found a baseball cap in adjacent field this was dismissed as evidence at the time and not included in the current investigation due to it appearing to be almost several years old and it was apparent to the investigating officers it had almost certainly spent five of them several years in that field and no one would wear a cap in that tired and disgusting state looking like it had been chewed by cows and left to the elements for a long time. However due to a clerical error police kept the hat bagged up and locked in an evidence room in a south London police station. With the fresh attacks police have managed to get a DNA sample from the rectum of a 3 year old patterdale terrier snatched from a South London park, Police in a desperate attempt to get a lead on this case took a fresh look at all the evidence from past attacks and stumbling on the baseball cap in its sealed evidance bag. They now have a breakthrough, a hair sample found in the cap is an exact match of DNA found in the anus of the terrier it turned out the hat had been dropped the same night as the attack on the horse.

Police know from further investigation that the assailant is Shane McDonald and is believed to a be an unemployed loner from south east London although he may have latched himself onto a bike gang or group of motorcylists in the London area in attempet to make friends and appear normal. He may favour sports bikes police believe this is how he managed to cover large areas in one night, if you have a friend that looks this and is constantly wanting to walk your dog please phone the police immediately or contact local police with information, police are urging all pet owners to keep all animals in sight and dogs on a lead until he is caught he is not considered dangerous but memebers of the public are urged not to approach Mr McDonald 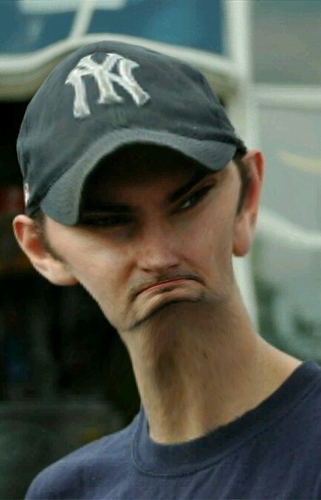 Im scared. I passed through their earlier today and there was lots of Police activity…

and how does the revenge taste, good Sir? :w00t:

your gonna fking get it now dude…ohh this is war!!!:D.

hahahahahaha this is absolutely brilliant… he did pay my westie a lot of attention when he came over :w00t::w00t:

We used to love flopsy the rabbit, but he went missing one day after shane’s visit, it all makes sense now… he must like it tight :crying:

We used to love flopsy the rabbit, but he went missing one day after shane’s visit, it all makes sense now… he must like it tight :crying:

to be fare Shane its not beyond the realms of possibility is it !!!

many a true word spoken in jest …etc

to be fare Shane its not beyond the realms of possibility is it !!!

many a true word spoken in jest …etc

ROFL again, just had a funny thought about this post.

:w00t: Wow - why don’t we get threads like this anymore - hysterical!

Lou it must have made an impression on you but really you ought to get out more:kiss:

Is it wrong to laugh at your own jokes!!

Nice one lou!! It was of course based on fact