The UK’s most popular electric motorcycle brand, Super Soco, is expanding its product range even further with the all new CPx, a 125cc equivalent maxi scooter that makes city commuting an ease. The nimble two seater scooter offers up to 80 miles on one charge (two batteries) and costs just £3,599 with the OLEV plug-in Motorcycle Grant.

As commuters begin returning to work, there has been a growing demand for alternative modes of transport outside of the traditional trains, buses and underground. Super Soco, the best-selling electric motorcycle brand in the UK, has noticed a sharp increase in the number of new riders looking for a clean, green and cost-effective alternative. The company is now excited to be expanding its product range even further with a move into the maxi scooter market with the new CPx. 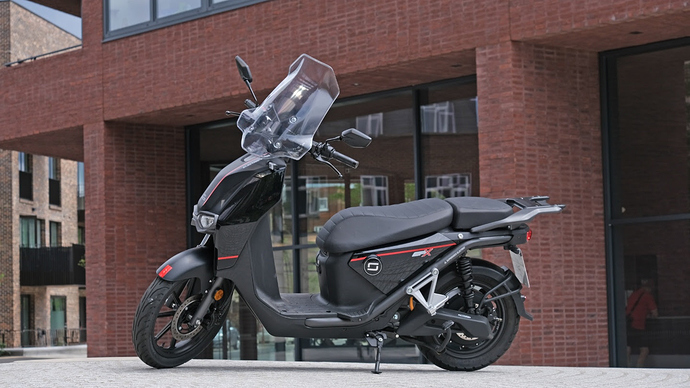 The all-new two seater machine has been created to provide commuters across rural and urban environments with a fast, nimble ride. Equivalent to a 125cc petrol scooter, the CPx has capacity for two 60V, 45Ah batteries, which combined can give a range of up to 80 miles and a top speed of 56mph, ensuring it is suitable for A roads.

All Super Soco machines are designed with removable batteries, allowing commuters to easily remove them after arriving at work and charge them whilst at their desk. The CPx batteries are able to be fully charged in just three and a half hours.

In order to traverse the hustle and bustle of a major city, the CPx comes with telescopic front forks and a hydraulic monoshock rear shock absorber, ensuring it is incredibly nimble through traffic. With a seat height of 760mm, and weighing just 107kg, the CPx is suitable for riders of all statures.

The scooter is able to be ridden on UK roads with just a CBT and an L plate, and will be available in dealers from September. The CPx is available in three colours, black, great and silver, and will cost just £3,599 with one battery inclusive of the OLEV plug-in Motorcycle Grant (£4,498.75 without) whilst the two battery version costs £4,699 (£5.875.75 without OLEV).

Andy Fenwick, Super Soco UK, added “We are really excited to finally be launching the CPx. We unveiled it for the first time to the UK market at Motorcycle Live in 2019 and since then it has been our most asked about model. Maxi scooters provide a great way to quickly get around town and the CPx provides a nimble, cost-effective solution for those riders looking to socially distance and discover the benefits two wheels offer.” 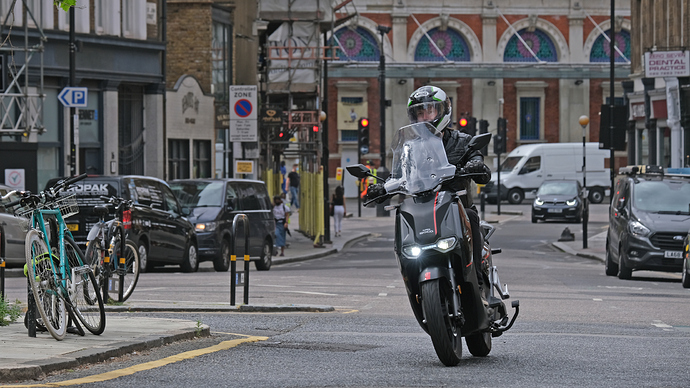 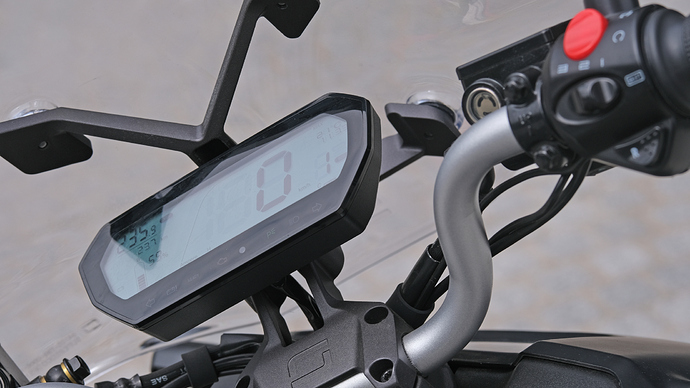 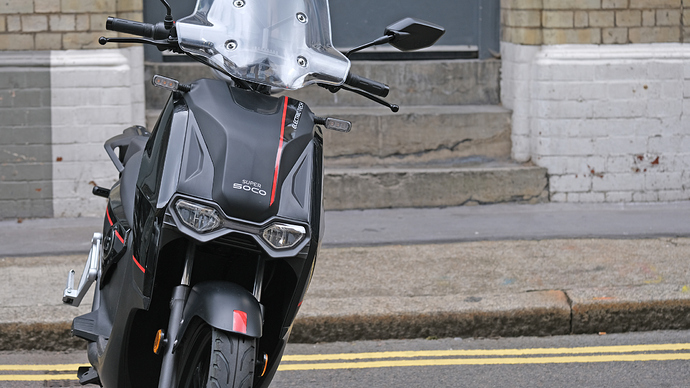 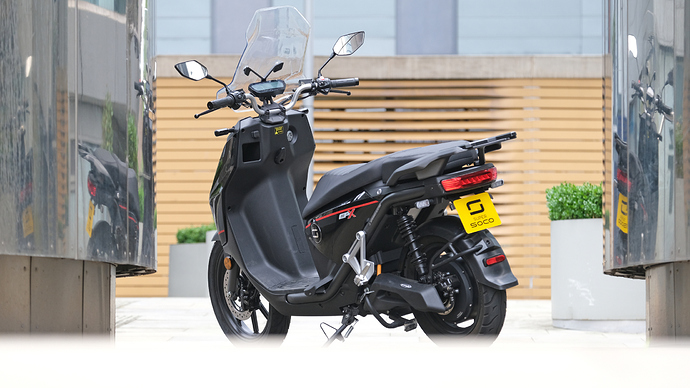 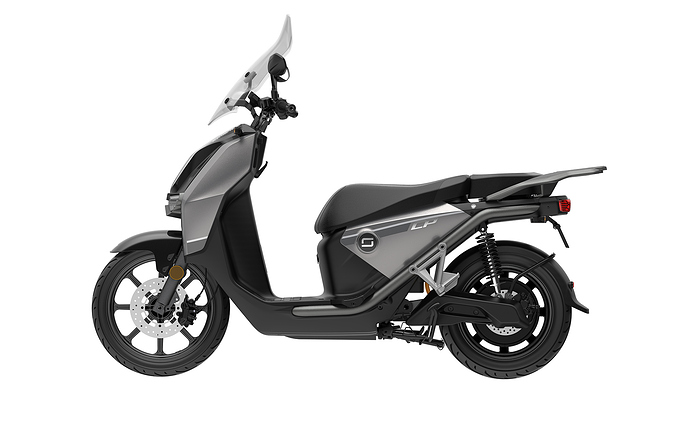 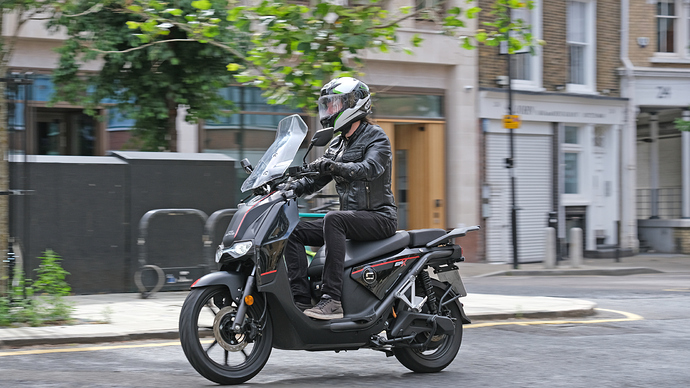 It works so long as you have somewhere to charge it. That still seems to be the biggest downfall for electric vehicles in the city.

There’s more chargers in London that Petrol stations. That said, bike bays could do with some chargers as well though, that would help adoption.

That would make things much easier.

I love the idea of the removable batteries. Can’t normally charge when on the road simply across a pavement from your house. Also a little of a theft deterrent. 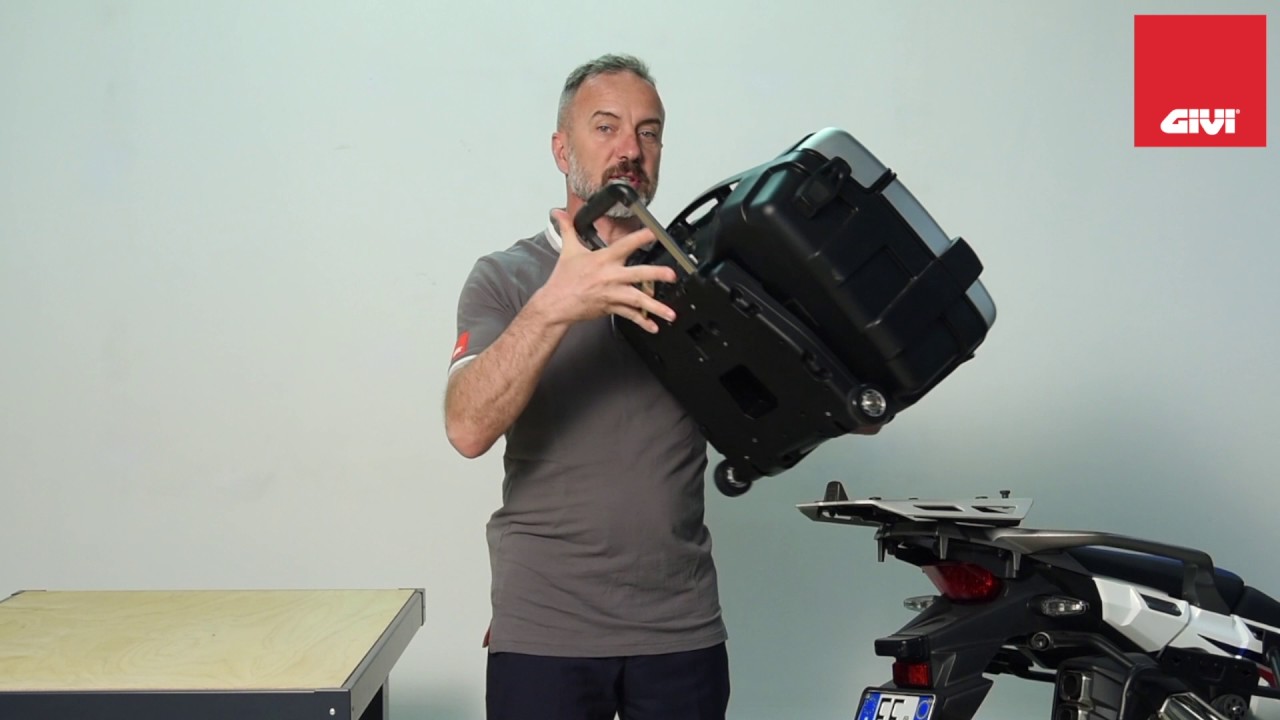 Noted - “Electricity currently costs approximately £0.12 to £0.18 per kWh, so using a Super Soco electric motorcycle means you will spend less than £1.00 per 100 miles”

and with the “removable batteries, allowing commuters to easily remove them after arriving at work and charge them whilst at their desk” electricity costs are met by your employer.

I like the look of that as a scooter. 80mile range still feels a bit small for two batteries (which cost quite a bit) and I assume that is the lab range rather than real world?

I’m not sure how heavy these batteries are if you can take them and charge them at your desk… Would be nice if they had a video showing how easy (or not) it is - i.e. can you charge them both at the same time, with one charger? Would you have to carry a specific charger as well?.

As someone who lives in a flat (with no chance to put a plug on my patio) that is a really welcome innovation.

I imagine it would still be a faff if you have to carry laptop, helmet etc with you and probably a big no no if you park on road.

Lastly, the one thing I always miss is how many charge cycles before the battery degrades? Is that an issue with EVs?

If I was still in London, I’d definitely consider it…

I’d imagine a few companies will ban people from charging personal equipment at work unless they contribute in some way to the cost.

Rather than look for negatives, let’s look for some positives:

Its all good if you’re looking for a run around town commuter. It won’t be free of servicing though, what is the manufacturers service schedule for your EV car?

There must be some servicing/checking to be done within 5 years of ownership?

Yes you can look at the positives and I agree it’s a good thing to have more of these bikes.

But I don’t think it’s highlighting negatives but rather questioning what is possible.

It’s interesting that it doesn’t need servicing, I would have thought it would. The other thing I remember from early EVs was the cost of replacing batteries. Given that they are removable at least there’s no mechanic cost to change but how much would it cost.

As I said if I was in London just skipping about town I’d seriously consider it. I’m a fan of scooters in town centres

What servicing would you expect? There are so few moving parts. There’s no engine or gearbox so no oil to replace. There’s no clutch so nothing that needs replacing.

Servicing for my EV car to date:

Servicing expected in the future:

My car’s manufacturer policy on servicing is: we’ll let you know if something needs replacing but don’t expect much if anything. They have full sensor telemetry so know what could go wrong with the car. I also get home servicing if needed, or repair for when your wife reverses into a tree, but that’s going off topic a bit.

For an electric scooter, over say five years of ownership I would expect:

Owning an EV is bliss. You just get in/on and go, no hassle, no warming up an engine, full performance from the go (and oh my god the torque!). No wasting of your time getting it fueled or serviced.

As far as battery degradation goes. It will vary by manufacturer though for my model of car, over 200k miles the average degradation in capacity is 6%. That’s pretty awesome in my books. An engine loses performance over its life, so a slightly different metric but somewhat comparable. I would hazard a guess and say an engine loses more than 6% performance over the same distance, and battery technology is improving all the time.

Makes sense… I guess it’s just the consumables like tyres and brakes? Don’t know much about EVs as I can’t really consider them due to having nowhere to charge at home…

No, the batteries are sealed units. Between the electric motor and the wheels will often be a reduction gear but it’s so small and simple the oil doesn’t need changing very often it seems. Might not even be a service item at any point on a scooter if one is used (guessing here, they might just be motor to wheel by belt drive).

Brake pads might not need changing. Regenerative braking means you should do most of the deceleration just by lifting off the accelerator. You generally only need to use the brake pedal/lever when you’re coming to a complete stop or if you or someone else has made a mistake and you need to pull up quicker than the flow of traffic would normally require you to.

I’d lump scooters in with cars in terms of how you probably would and are expected to drive them, i.e. smoothly, but bigger electric bikes, you’re going to want to use the performance of the brakes so this probably doesn’t apply as much to those