So let jubilation reign, let there be no end to the rejoicing that must surely sweep the nation.

My beloved 675 had it’s first run up and down the drive today after 54 weeks off the road.

Why 54 weeks? Well it’s too dull a story to recant here, but basically I skittled it a year ago which bent the forks. I let it rest all winter as dealing with it was just too damn upsetting. Then the forks went to K-Tech in April for rebuilding and upgrading. They lost them then found them and failed to tell me that new parts were needed from Triumph. I eventually chased them up and hey presto today I finally installed them.

So with some padding on the garage floor I did just that and it worked a treat. Once installed and the bike up on paddock stands I realised the clutch cable needed re-routing to allow full lock and swore at the prospect of taking the forks out again. Instead I dismembered the clutch lever assembly and threaded it through the forks in situ. Hey hey looking good so I gave her a good wash to remove the dust and cobwebs too then an oil change as I wouldn’t trust oil that’s sat for a year.

Tomorrow the fairings will go back on and I’ll be out for a test run to make sure everything is pointing the right direction, and the same direction as when I left hehe.

Weather permitting I’ll be out tomorrow night to show her off, and I’ve promised a test ride to a few people so doubtless she’ll get a welcome back thrashing hooray! 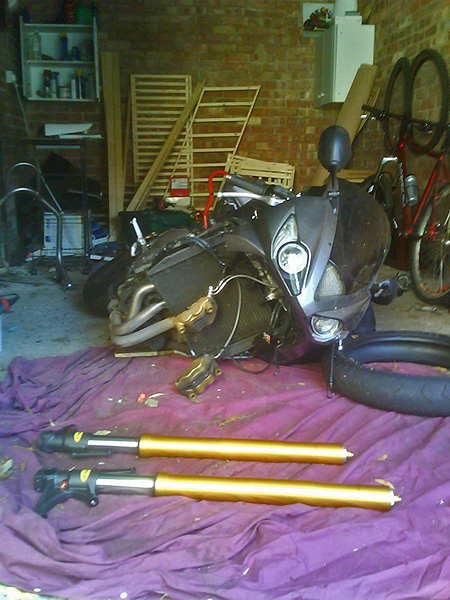 Well done Andrew for another thread thats useless without pictures;):DSeriously… good work mate, hope you enjoy getting to know your trumpet again:cool:

Excellent news…So will you be out on Flatouts ride out?

Ok Ok there’s a pic from my phone for you!

And I thought your Triumph was just a rumour ;)

She’s looking a little down on her luck in that picture…but I’m sure she’ll look better up on two wheels again…and even better yet up on two wheels with you wringing her neck good and proper!

Hehe yeah Graham, I thought it too. Occasionally I’d be getting on 7 and look think, there’s a newly new superb bike sitting there doing nothing. I mean, I must be mad.

But just in time for winter, here it is again. It still needs a new front mudguard (blistered), both brake levers (both bent but usable), some repairs to the fairing and tail unit (cosmetic) - all of which should get dealt with over the winter.

Please post up a piccie that shows her on her wheels, she looks so sad on her side :crying:

Well done mate. See you were resourceful as well.

I’ve used the on-its-side trick before when replacing an engine cover.

Look forward to seeing it out and about.

oh hurray! Tiger is wishing her a speedy recovery!!! we cant wait to see her once again in all her glory!! hurrah for the trumpet!!!