Friday 25th August I popped into BikeStop ( https://www.bikestop.co.uk/ ) for a toasted bacon sandwich with a pot of tea. £5. Got two cups of tea from the pot. Fine. Staff in BikeStop are always friendly, talkative, and in uniform. 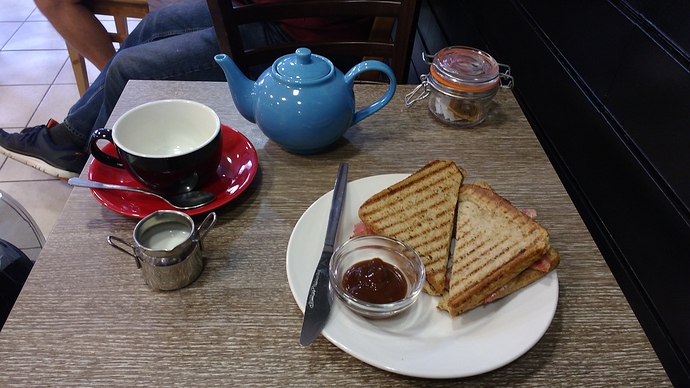 By contrast today 27th August, I went to the Silver Ball cafe in Reed, near Royston. Had two fried eggs, asked for the white to be thoroughly cooked as I don’t like snotty eggs, two slices of bacon, mushrooms, onions, chips and a fried slice, with a cup of tea. The tea was bland. although only about 20% of the seats were taken, it took aobut 15 minutes for the food to be served. The eggs were completely thoroughly cooked, yoke was solid, the bacon was dry, not hot just warm and like cardboard, and the chips were warm and stoggey i.e. not crispy, sort of soggy, as if they’d been refried. That cost £8.70. Don’t think I’ll be going there again. The mushrooms and onions were good though. 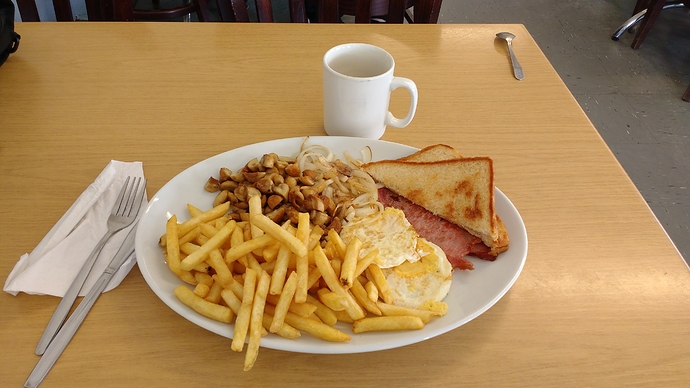 I’ve not visited either of those so thank you for the update.

The Ace is consistently good as is the Departure Lounge. The Bike Shed, the Rodean.

I kind of work on a sliding £ scale for food, the cheaper it is the less I expect out of it. Also those chips that’s actually how I like mine so I’d have be chuffed with that.

Food is a wonderful thing and will always be interpreted differently.

P.S just to say I like where the thread could go! think we should be putting addresses as well so we know where to go.

I think biker cafe’s are more open to visitors leaving their helmet lying around.

silver ball is not a bikers cafe predominantly …Its a Transport cafe as well as training ground for moon landings in the crater filled car park .

Did a 300 mile round trip to Corfe Castle today.

The food at Whiteways was really bad. Loomies was good.

I think a lot of the point of motorcycle cafes is a weird fondness for the time when you would be turned away for having a bike. They’re often in the style of an old motorway service station and a bit shit (aping the sorts of places that couldn’t really turn them away). H’s is pretty much exactly that; I can’t imagine why anyone would go there unless they particularly wanted to remember a time where the only places that let you in were also the places that didn’t have a working toilet.

If you went to Corfe and the closest you were eating was in Sussex, you got that wrong

I’m a little biased, but Swanage (10mins from Corfe) seems to have a decent rotation of cafes/restaurants going on now, and the area’s swimming in decent cream teas…

Ha ha, it was a long route. Breakfast at Whiteways, elevenses at Loomies and lunch at Gee Whites but as that’s not a biker cafe I didn’t mention it. Excellent fish and chips and great views of the harbour.

Must agree. Dorset has tons of great eataries.

The Bluebird cafe on the south coast is a LB favourite, especially good on a sunny day