Motorbikes no longer allowed to overtake car queues in France

Motorbikes will no longer be able to overtake queueing cars in the 11 departments where it is currently authorised in France. Drivers will face a fine of €135 and three points being removed from their licence for doing so.

The new rule follows a trial which has been running in Bouches-du-Rhône, Gironde and Rhône since 2016. A report released by road safety agency la Sécurité routière found that motorbike accidents decreased by 10% on roads where overtaking was banned.

What’s changing in France in February 2021

What’s changing in France in February 2021

I give it two weeks before the French bikers kick off…

WTF!!! What I don’t understand is the article saying it will no longer be permitted in the 11 Departments where it is currently authorised. Where are they and how is it communicated? I have never seen anything about any differences when in France.

What’s a queue? Traffic lights? Ooff, that’s horrible if so. So they’re banning much of filtering.

They say it reduces accidents by 10%. What kind? Minor bumps or KSI? If minor bumps then I can’t see it being worth doing, especially as nobody is being inconvenienced by faster-moving bikes getting ahead so all they’d be doing is trading reducing small bumps a tad with increased congestion.

Of course, the question we should be asking is how many rear shunt/sandwich motorcycle accidents has filtering prevented in the past?

If we’re changing behaviour because its deemed to be risky and the cause of accidents, that needs to be compared to how tricky and accident-prone the proposed new behaviour is. Especially given that radar braking systems are not known to identify small motorcycle very well.

Filtering is illegal in France, the trial allowed filtering on dual carriageways with a speed limit of 70 km/h or greater in eleven départements, which included those of Île-de-France in addition to those Rusty99 names.

As the purpose of the trial was to reduce accidents, the results were unconsidered unclear so a change will not be adopted. However refinements for further trials could be considered, which could include better education for all road users.

All of which is notwithstanding how well the law was already being followed anyway.

If you read French, the full report is here:

Can’t wait to hear @bluelagos view on this

Fck that mate. I am going to use Eurotunnel this summer just to do some extreme filtering past the Brexit voters waiting to clear customs…

Luckily we here in Spain are now allowed to ride the highway shoulder. Filtering is not allowed, though I never had a fine for doing so, maybe because when I do it I never go faster than 50km/h. Traffic lights filtering is allowed.

Last time I went to France I was surprised to see motorcycles filtering faster than speed limit on the highways, maybe the reason

Filtering in France is insane. I’ve seen bikers physically kicking cars out of their way on the Boulevard Périphérique rush hour race track. And yes, once they clear the car out of the filtering “lane” their speeds are mind-blowing.

It is possible the legislators have this behaviour in mind.

I wasn’t far off with my two week prediction. Today 10 000 bikers brought the Paris Peripherique ring road to a stand still protesting against the law changes. 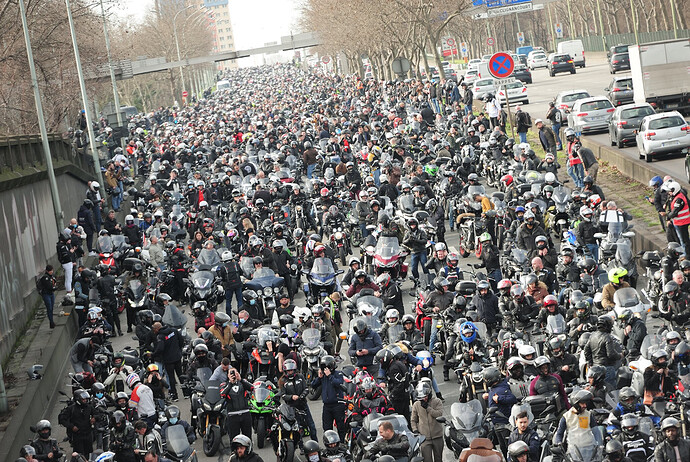 If there’s anything the French know how to do, it’s protest.

We really need to learn from that.

We have done, Poll Tax protests, Fuel Protests, the anti-brexit protests, there are protests about lots of things. But the problem is political elites just ignore them.

And when it’s voting time, the populace forget too

Yep and they’ll remember being more able to socialise over the summer and every adult being offered the vaccine by the end of July. Add to that the UK’s GDP will be the first to recover in Europe and Boris and Brexit will be seen as triumphs. Memories are short.

It obviously depends how you protest. The Poll Tax riot was not ignored, the policy was swiftly cancelled and the Prime Minster kicked out. That was an effective protest.

The four extremely large anti-Brexit protests were completely ignored because they were perfectly well behaved and easily ignorable. On one of those protests I only saw two policemen (in shirtsleeves) and they weren’t even policing the protest, they were giving directions to lost tourists.