No sooner has he expanded the ULEZ to the North and South Circular he wants to expand it further.

You keep saying he as if this is not caused by the govemenrt insisting TFL is self funding (unlike every other major city’s public transport).

This is more tory vs labor fighting, which unfortunate we have become pawns in

Actually reading the article, this sounds like its the same report as that other thread about a bunch of hypothetical things that can be done to get net zero by 2030. As pointed out there its not actual plans, but options that TFL can consider. Ive always assumed the ULEZ will expand, and the age requirement will drop to follow increasing standards, otherwise its a bit pointless.

This is more tory vs labor fighting, which unfortunate we have become pawns in

I do not think it has anything to do with finding but is genuinely about cleaner air. Which is a big election issue now, unlike when Johnson was elected and got rid of the western extension to the congestion charge.

Every party supported the ULEZ, and only party-goer Bailey opposed the extension. When that happened the only comments I saw locally were complaints that it stopped at the south circular and Streatham was not included to benefit from it.

Of all the proposals I think this one will be widely supported. And I guess the fee on people driving in from outside London, which was originally a party political battle over funding.

ULEZ is a tax grab, nothing more. Emissions are regulated by the ‘Euro number’ standards.

All of those new cars bought to replace hardly used old vehicles have caused emissions to be created somewhere other than London.

And anyway, clean air is a reasonable thing to strive for, but how clean is clean enough?

Be careful who you vote for!

ULEZ is a tax grab, nothing more.

Then spite them by only driving ULEZ compliant vehicles. That will upset them.

According to an F.O.I. request, it was reported that operating the current zone will cost £100m over the first four years. And only around 8% of all vehicles within the expanded zone will need to pay. As tax grabs go, it seems a pretty poor one.

Not that I see what is wrong with tax grabs anyway. Police and fire stations are being reduced, road maintenance is being reduced, how do you think all that gets funded? Taxes have to be levied somehow, somewhere.

All of those new cars bought to replace hardly used old vehicles have caused emissions to be created somewhere other than London.

For cars we are talking about diesel ones that are over seven years old but for petrol it is ones which are over 16 years old. I would imagine many people would be replacing theirs with second-hand car ones given the massive amount of choice across such an age range.

But the issue is not “emissions” but localized air pollution caused by a concentration of them. The current zone covers an urban area of about 145 square miles with dense traffic.

Glasgow will be enforcing its current Low Emission Zone to cover private cars from next year. Edinburgh, Aberdeen, and Dundee will introduce zones this year, though not enforce them for two years to give people time to replace non-compliant vehicles.

This is not just London, it is not even just the U.K.

And anyway, clean air is a reasonable thing to strive for, but how clean is clean enough?

Air pollution causes around 4,000 deaths per years just in London, let alone all the ill health. So I do not know, maybe clean enough is when it is not killing thousands people?

Be careful who you vote for!

Clean Air Zones are a Tory government policy, which they require in places with significant local air pollution problems. It has support from the other three main parties. The ULEZ was an invention of a Tory mayor and also had cross party support, implementing it was in all the manifestos of the four biggest parties for the 2016 election.

Even despite Bailey’s mayoral platform, the G.L.A. Tories do not seem to want to reverse the ULEZ expansion. They are only making a fuss at it being introduced during a pandemic and campaigning for a scrappage scheme. London being the only place where the government does not provide support for one.

So that only leaves the fringe parties.

Air pollution causes around 4,000 deaths per years just in London,

I agree with your post Michael but on this one point I think you’ve underestimated it. The King’s College study, which hasn’t been challenged, puts it at circa 10,000 deaths a year. Over the whole country it is 40,000 per year.

As someone who lives in zone 2, and who’s daughter goes to school in zone 1, her school building being on one of the busiest roads with all its windows open because of Covid, I am in favour of anything which reduces this harm. 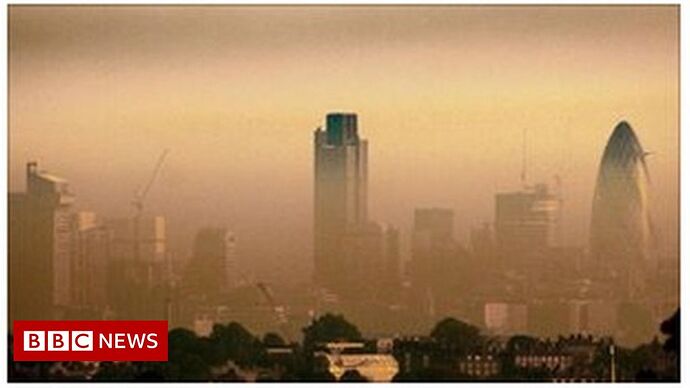 Nearly 10,000 people died in a year as a result of air pollution in London in, a study finds.