How ironic that on the day that Paul McCartney agrees a £100million settlement with his ex wife, she launches her new book. 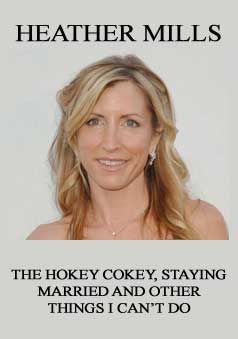 A South African gold miner has an horrific injury whilst at work an ends up having to have his leg removed,after a few weeks he becomes very very depressed. ‘I’m screwed now’ he said 'who on earth is going to want a one legged gold digger…

Paul McCartney bought her a plane for her birthday . . . the ladyshave just couldn’t cope with the knots in the wood :w00t:

It’s Her hypocrisy I can’t stand. All that campaigning against land mines, when Shes only half as much at risk of standing on one as anyone else.

£50 million and it’s loads more than she asked for… he wants rid without anymore ****. Can’t blame him really.

You lot are mean.

£50 million and it’s loads more than she asked for… he wants rid without anymore ****. Can’t blame him really.You lot are mean.

Pre-numps arent worth the paper they’re written on in the UK, we aren’t totally americanised yet… shame!

my little sis was marrying a tasty young millionaire she met in this country as a business arrangement. A prenup was drawn up, she wants to work in the USA, she does burlesque dancing. Plans changed - he fell in love with her and doesn’t want to take him for a ride. Respect to her.

As for Heather… mmm jury is out on that one