My cover feels a bit flimsy but has stood up to all weathers since the beginning of last year and on and off the bike (Trident 900) like a pair of strippers nickers. Being thin it’s really easy to take off and roll up. I can’t find where I got it from but this below is similar and about the same price. Defo use two locks, a disk lock on the front at least. 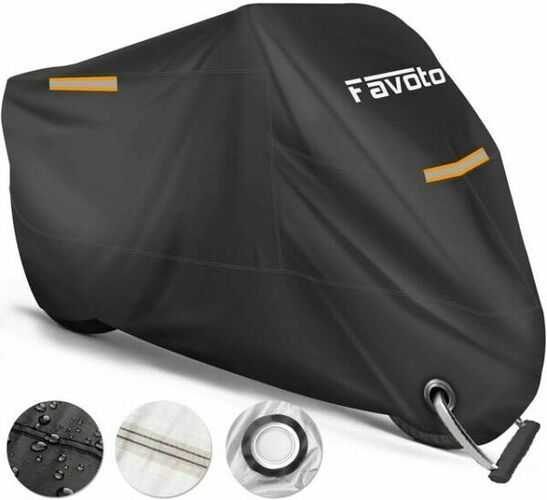 Find many great new & used options and get the best deals for Favoto FTEU-Motor-Cover-XXL Water Resistant Motorcycle Cover at the best online prices at eBay! Free delivery for many products!

Good that there even is ground anchors. I’ve asked Lambeth more than once, and they prattle on about shared surfaces and blah blah fell asleep reading

I’ve emailed Pragmasis and Almax to see what their best solution is. The only thing I can think of is potentially using a Mini Anti-Pinch Pin (or something similar?) to go through the anchor Anti-Pinch Pin - Mini-Pin, Anti-Pinch Pin, APP-MiniPin from SecurityForBikes, by Pragmasis Then could use a 22mm chain.

The problem I would then need to use a Squire SS65 rather than a SS80 which is a lot stronger plus the pin is probably the weak part to attack. 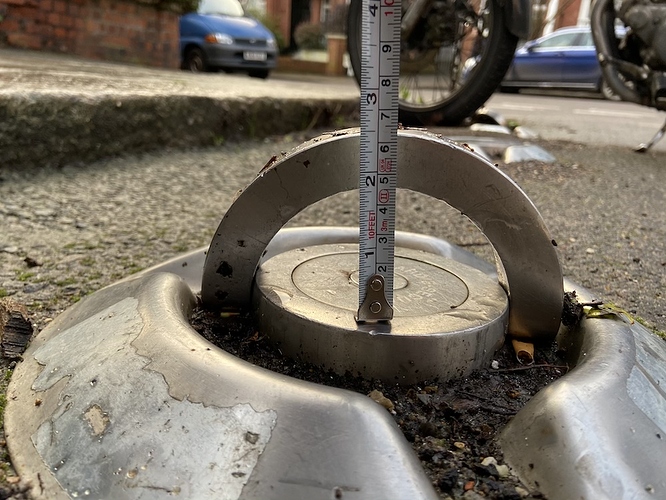 Here’s the width (I was limited to one photo) 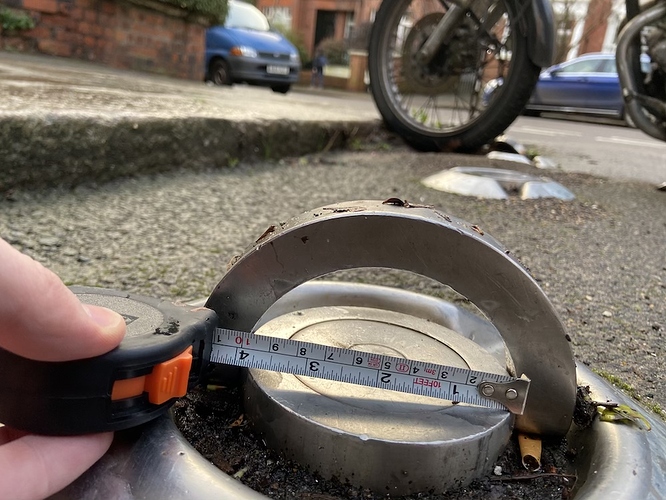 I own five Almax chains, and would thoroughly recommend that company. When I initially rang Almax, Alex advised that I only need to buy one padlock and the chains can thread through each other, so he was actually saving me money instead of easily selling me an extra two padlocks. He’s a very helpful guy.

I use three large chains at home in the garage with the ground anchor all the time. The smaller Series II chains I bought for international travel.

Camden without a garage

I live in Camden, with a garage, max NCB, no claims ever in over three decades of motoring, and my premium is often quite spicy.

But near me there is an on-street bay which is packed with some nice bikes and they are kept there full time. They are locked to the guardrail alongside the bay but even still, I’m amazed they are still there. People obviously do get (and pay) insurance for these. Unless they are all giving their parents’ addresses to their insurers.

It’s a very good point… Everyone assumes that you leave the bike for a day and it’ll get nicked. I used to live in Angel, work in London bridge, and would park on road all the time. Chain at home, just disclock at work. And would go everywhere on just a disclock for nights out. This was for 2-3 yrs

Only once did someone try to nick, outside a pub in Kings X.

Ok things may have got worse since 2010 but it is still possible to own a bike on street. Yes risk is greater but with the right precautions it works.

My first year with the RR it was parked on the street with an Oxford boss chain, d lock though the front wheel and an Oxford stormex. I used the council ground anchor. It was ok, although someone had a good go at lifting the cover once. That was in 2010, Kensington. Not sure if I’d do that now. The Oxford Boss is a weak chain but it was what I could afford at the time.

Well I’ve put a deposit down it’s a 2014 CBR650F so 6 year old non supersport! I think I have a solution for the 22mm chain to fit through the council anchor. @Joby do you chain through the frame or wheel?

Rear wheel. There is no exposed frame on a 600RR. You can fit the 22mm chain through the front wheel on an RR if you’ve an hour of your life to spare.

You can fit the 22mm chain through the front wheel on an RR if you’ve an hour of your life to spare.

Have a look at https://securityforbikes.com/proddetail.php?prod=APP it might be possible to pass an Anti Pinch Pin through somewhere.

Back with an update. After a few emails with David from Pragmasis I went with the Protector 22mm Titan Chain with RoundLock (Package Deal: Protector 22mm Short-Link Chain (RoundLock Version), RoundLock, Extreme Security Chain and Lock deals, P22RL-x.x-RoundLock from SecurityForBikes, by Pragmasis) and it just about fits through the anchor. You can only get the plate through and just about squeeze the bottom of the round lock underneath but it just about works! As I’m not using it everyday it should be fine. Here is a picture of how it looks through the anchor. (This is the 1.8m version it’s a bit of a beast weighs around 23kg with the round lock on) 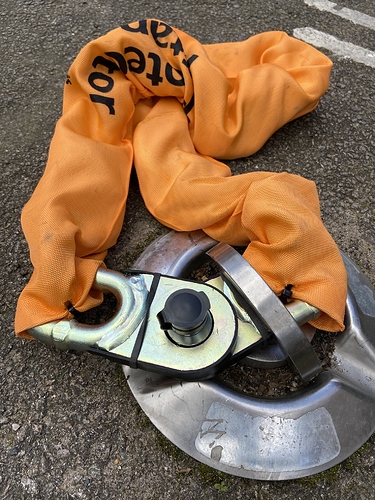 On a side note my mate had a Almax Series 3 (16mm) and this went through easily.

Jesus, the size of that thing @ptimson! Glad you got something sturdy in there.

That’s a thing of beauty, almost worth nicking the bike to keep the chain

I really hope it helps, it should be a deterrant at least

I parked up next to two GS today; one an HP sauce and the other personalised plate. Pretty confident my bike will still be there when I return…

What a gorgeous looking piece of kit.

As I’m not using it everyday it should be fine.

I take it because it is such a struggle to get into the anchor, and such a mammoth weight, that you intend leaving it in situ. It will be a real bummer when someone parks a heavy bike beside it and you can’t get it to reach your bike.

Nice work. You see how measuring the chain is no indication of whether it’ll actually fit into the anchor or be practical to use. This looks like a great solution. The weight of the chain alone is a bloody deterrent.