Lisbeth's bike in The Girl With The Dragon Tattoo

Saw the film last weekend and LOVED it. Didn’t think I would as I loved the original but I find the subtitles distract you from what’s going on and you don’t get the full story when reading IMO.

The main character Lisbeth is such a bad ass, and her bike is an absolute beaut. It’s a Honda CB350 - The full article of how they modified it is here http://www.bikeexif.com/motorcycle-movie

It even sounds good! Usually they dub over some high-pitched inline four cylinder whine.

Yup its a nice bike. Very much my kind of thing .I would change the seat though .

Very nice , may even inspire me to pull out the cd175 from the side of the workshop and give it a makeover Hmmm… I actually think the humped cafe seat with the ace bars is spot on even though the artical says its flat track style .
Dont quite get how the builder rebuilt the starter motors tho ?.

Nice bits of work, but then American motorcycle shops can do this stuff pretty regularly, particularly when they have film set money at their disposal.

Good choice of bike though and nice re working to fit the character.

Haven’t seen the film yet, but didn’t she ride a 125 Kwaker in the books?

In the original film she has a small black Supermoto

Looks normal sized to me.
Perhaps a Yam WR.

In the original film she has a small black Supermoto 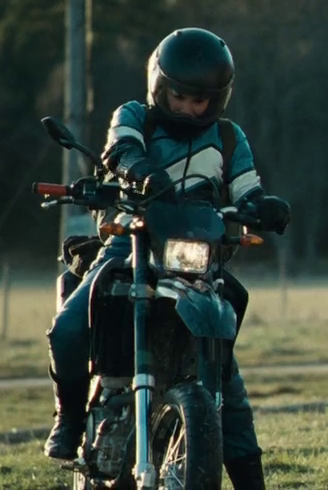 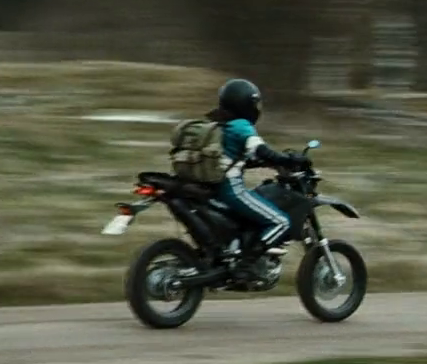