Some more miles needed for running the Aprilia and Ducati in, so last weekend we jumped on the bikes and headed to Inifnity Farnborough first to return the gloves I bought that hurt me, and ended up replacing them with the only good pair that fit… for double the money, gulp.

Also had to get a security torture device removed from Claire’s Alpinestars Tech 5 airbag jacket as they delivered it with the torture device (big metal pointy thing positioned just where it would be most annoying when worn).

Shopping done, it was time to load up Calimoto and hit the twistiest for a random spot down on the coast. Lee-on-Solent was selected and off we went!

Great ride for the most part, until Calimoto took us down a farm lane. Riight… aborted that at the next crossroads, got to a junction, turned left to resume what I assumed was the right road we wanted, only to basically ride into Loomies Moto Cafe! Never been. Total fluke we found it. Stopped for lunch, had a nice time then hit the road again for the coast (wish we had nice venues like this nearer to London).

Arrived in what felt like 1950’s England, got a couple of the worlds largest 99 and flake ice creams before falling asleep on the beach before heading back up the A3 to London. 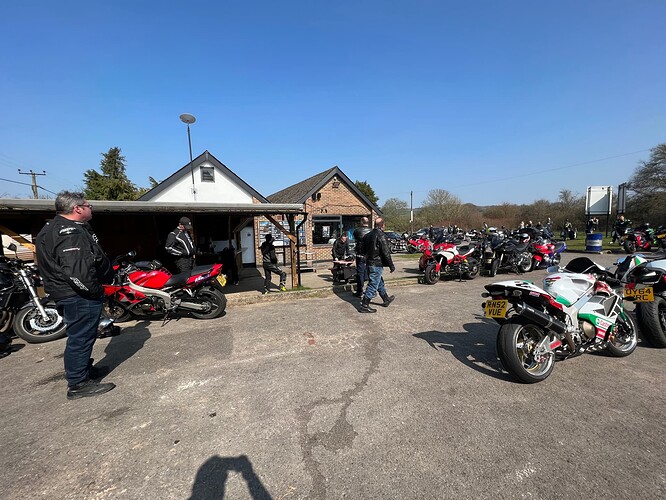 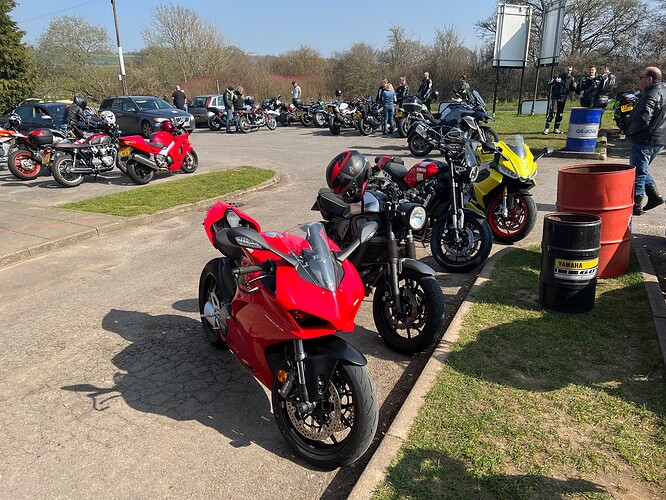 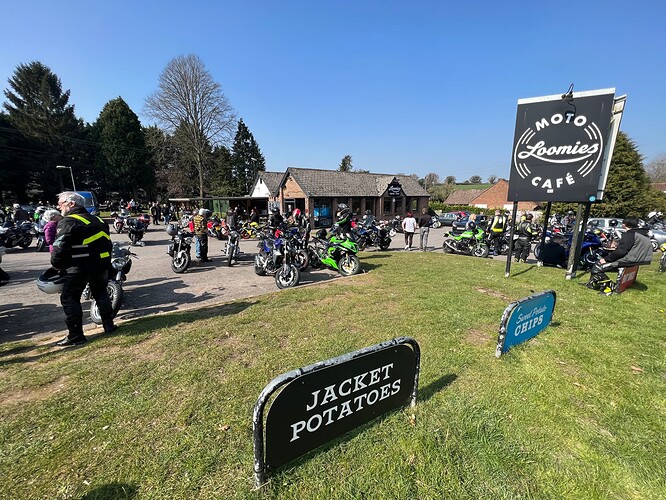 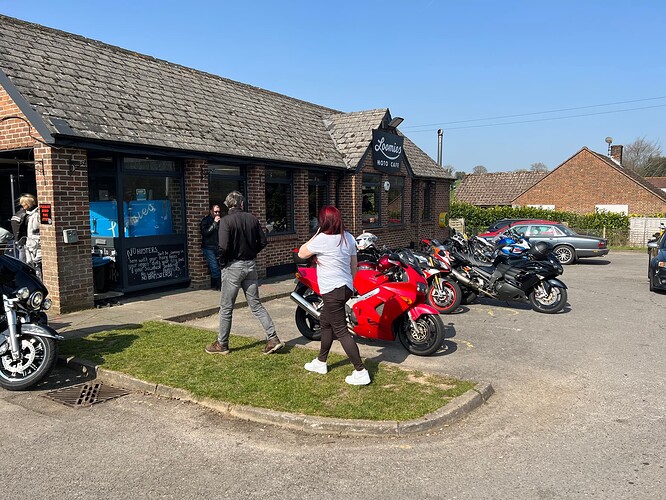 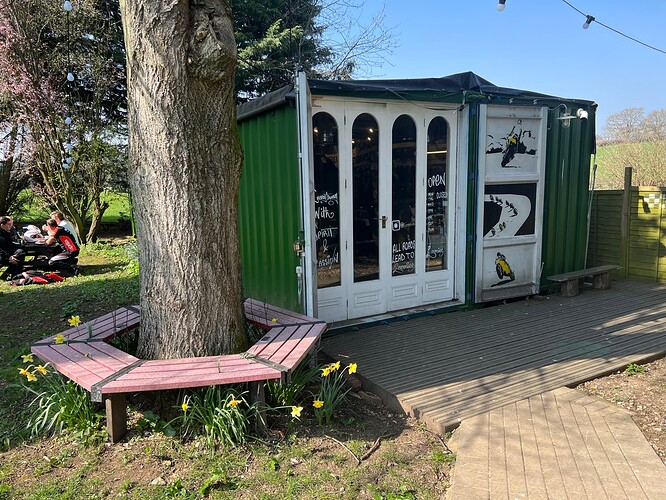 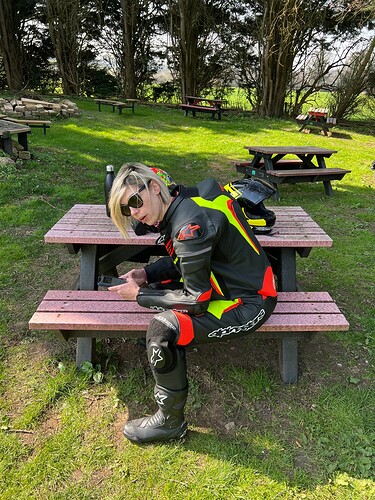 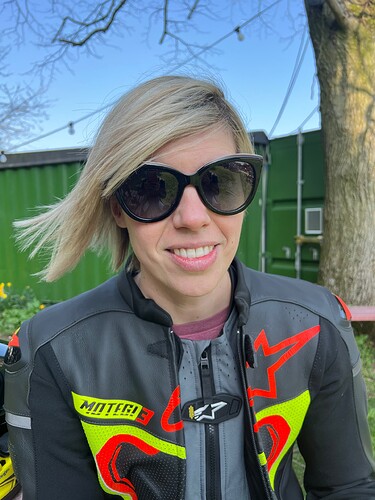 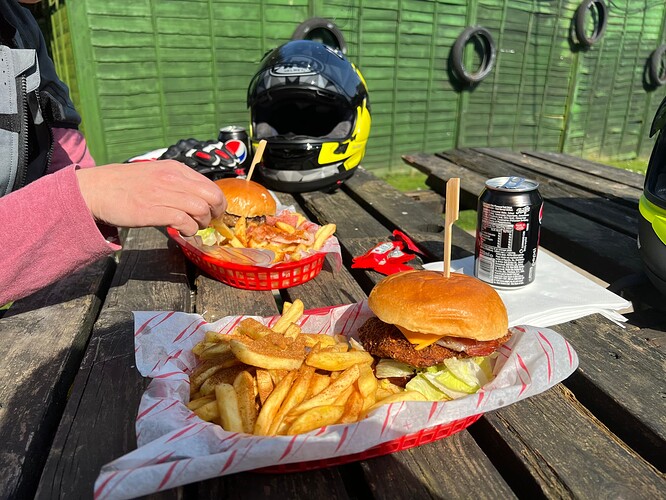 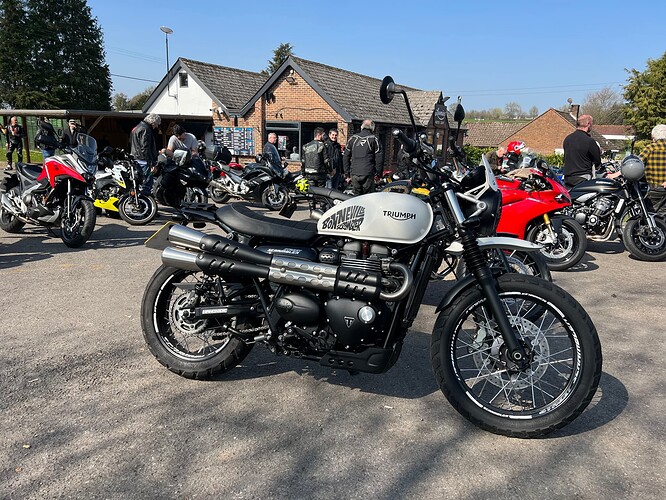 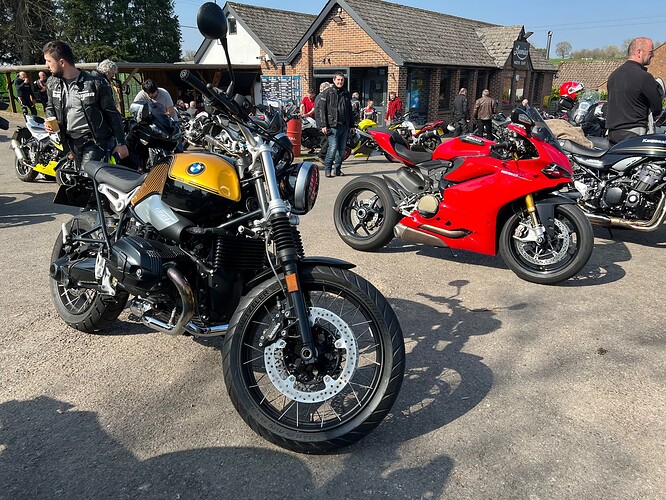 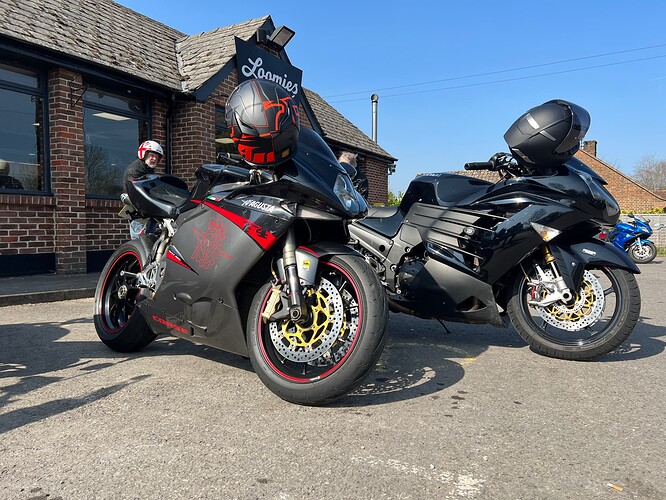 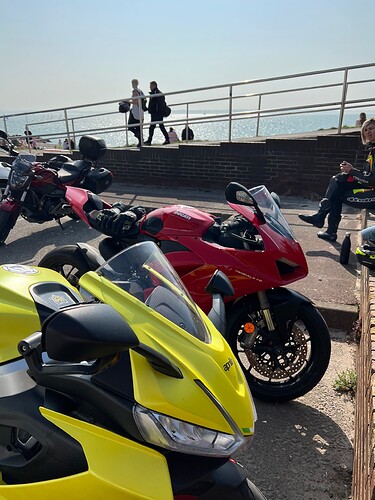 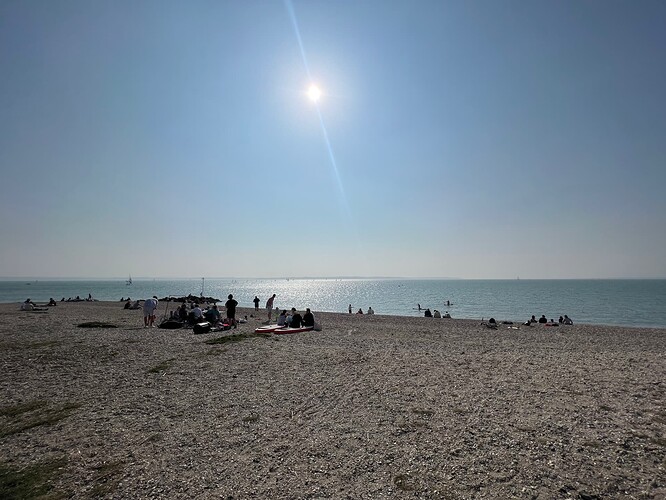 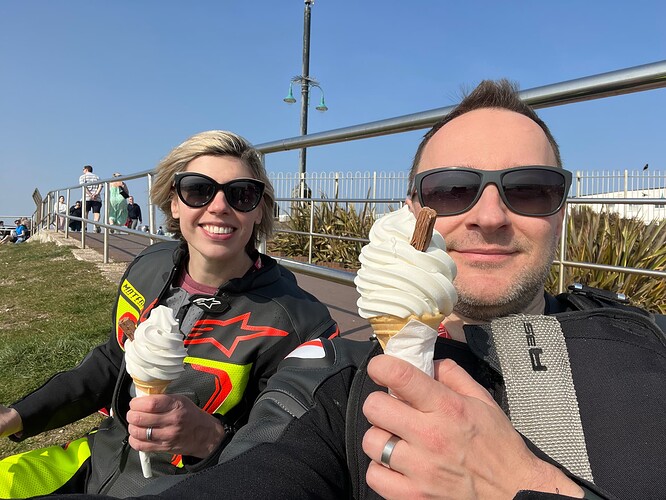 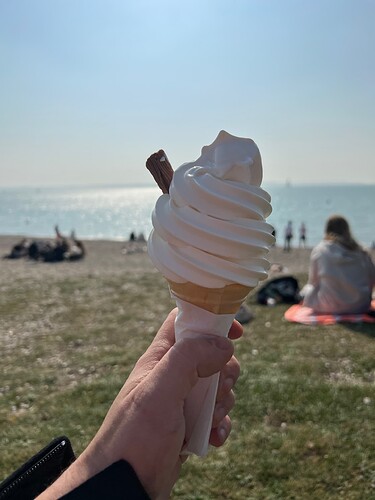 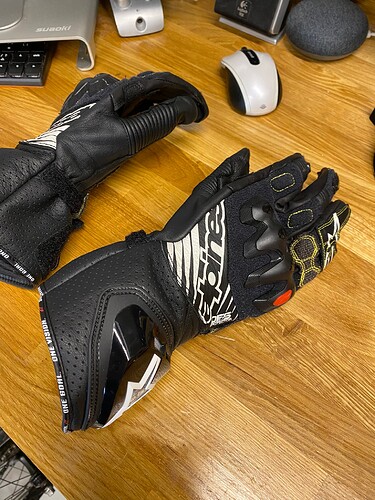 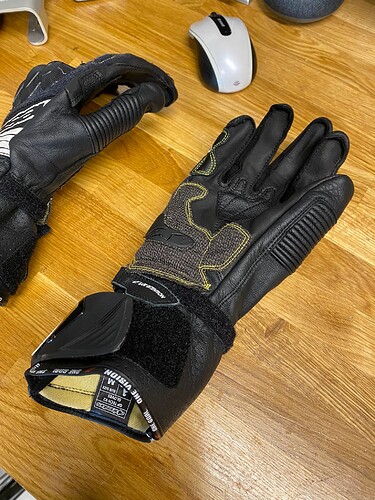 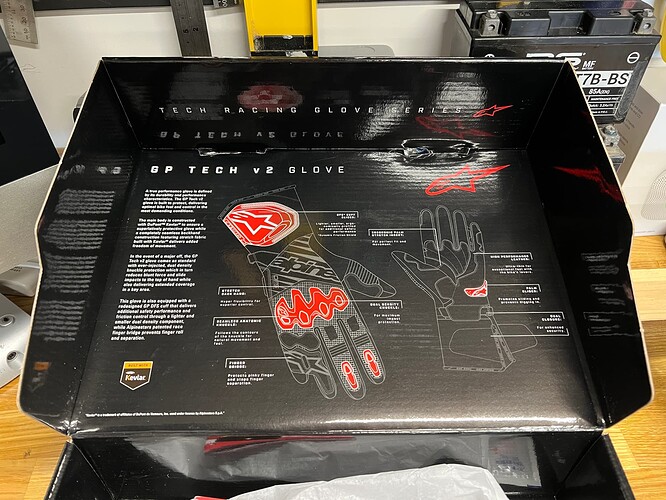 Oh and here’s the leathers I bought last week. 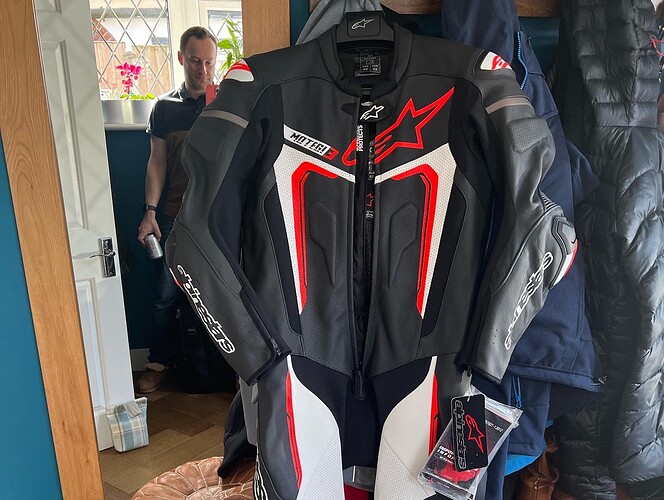 until Calimoto took us down a farm lane

You do have to laugh at some of the ideas it has. Coming up from Cornwall last year it routed me around a housing estate to pop out 200 yards up the road from where it had directed me off. Somewhere in its algorithm it thought: ‘this boring 1960s housing estate is twisty, he’ll like that’.

I think G.P.S. devices get confused when two roads are close together. Though I plan my own routes at home to load into my TomTom, one time coming home it sent me on a tour of Chelmer Village. Because it goes right up against the A12 it suddently made sense of all the weird places it had taken me.

On my last ride before shielding I was coming home from Weston-super-Mare on the A372 and it wanted me to turn off. I stopped and studied the map wondering if this was what I intended to do, I never remember, and went with it. That took me on a single track lane up a hill above Langport.

I think that as soon as it decides a co-ordinate to follow is on a bit of the side road then it assumes you cannot do a u-turn so plans a route to follow it until it can return to the original track. There was a point where I could have turned back, but a tractor had already given way to me going up so I did not want to look like an idiot coming straight back! That was also the day I came a couple yards from hitting a deer on the M3. I miss my days out.

I would guess it is the same principle with Calimoto. It generates a route to follow as a list of of GPS coordinates based on where a map says the roads are, and maybe applies an algorithm to simplify the list, the same as I do by using Google’s directions service. Then it just acts as a G.P.S. to follow that route, but when these sort of issues occur it sends you off on weird detours.

It’s super annoying. It even suggested the same farm lanes when we dialled the route mode back to fastest. No idea how it thought bumbling along at 15mph down a farm lane was quicker than the 50mph main road!

I don’t think I’d use Calimoto again, this isn’t the first time it’s routed us down completely unsuitable roads.

a tractor had already given way to me going up so I did not want to look like an idiot coming straight back!

hahaha. I would have. The helmet hides the shame

These mapping apps all use one or two map engines, or get abstracted by another, i.e. Google/Apple/TomTom with extra features for petrol heads, i.e. twisty roads. They’re not all unique. The GPS data is only used to place you in relation to the the map data, which is what you’re being guided along, so I don’t think it’s a GPS/coordinate issue, it’s just a routing effect.

The TomTom Rider’s ‘Plan a Thrill’ (windy roads) function seems to have it right, the routes have been fairly decent using the first setting apart from being directed into the occasional off road lay-by but I never saw that as an issue, only ever used the first setting.

Those security devices can be removed using a magnet

Certainly in my case it is not about routing as the only time I let a device decide for me apart is when approaching London to show the quickest route through town. And then ignore it and go my usual way.

When I plan a trip I save a GPX file containing the full track, i.e. a coordinate for most every kink of the road, rather than a bunch of waypoints. I just want to know where I need to turn off rather than it do any thinking for itself.

Planning a twisty route would have to work a similar way when it creates the route, because it needs to make sure there is alternative faster or short directions between the points it saves for the route when it follow them.

Anyway, Lee-on-Solent is always a nice stop off when in the area. So is a bit further down and a wander around Gilicker Point.