Keep Calm and Carry On

This apparently was a poster that the government of the day had printed during World War 2 - it was to be put up if the Germans invaded.

Someone has just put it up at work - I’m worried. 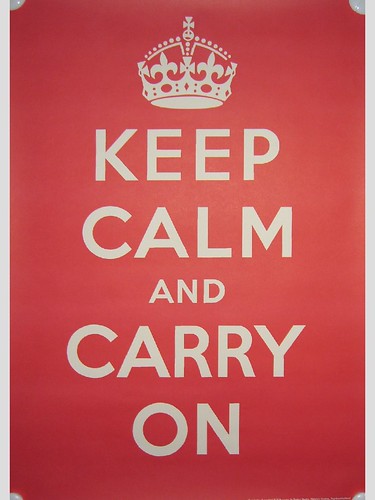 they know the significance of today x

I don’t get it? Is this one of those “stiff upper lip” kind of things?

I bet this wouldn`t have stopped them.

that would have made them run away for sure!

I think it is one of those stiff upper lip things… but I also suspect it was to keep the general population calm whilst terrorist activities where being activated.

My Grandfather was a firefighter during the war - he was also one of the operatives that was assigned terrorist duties should the germans ever invade - only discovered all this after he died from his papers. He never said a word.

He had explosives training and counter insurgent training - all sorts of very interesting things.

Interesting stuff, who’d have thought we invented counter-insurgency? Ironically we’re the targets of such tactics now.

actually we nicked it from the Spanish - they were very good at it - not to mention all we’d learned from supporting the French resistance.