“Form doesn’t follow function, they are the same. Simple, elegant design that looks as good sitting still as it does silently speeding through the next street corner. Every part of the Enertia was designed with the rider in mind.”

I know what you mean - it’s not gonna set many bikers hearts going - but it’s a start - and it (or some other alternative to petrol) is the future - the Wright brothers Kitty Hawk looked pretty sh1t - but then things improved pretty fast in aviation - things should improve even quicker in the alt energy transport field.

When I saw the pic the first thing that went through my mind was ‘FLATFISH’ look at the body, doesn’t it shape like one?..lol

As it’s an “alternative” concept bike, you can sort of understand they want “alternative” appearance. Once unveiled, the motor aint going to look that much. (The inside of a wasking macine is about as exciting as it gets.)

That stated. What a visual crock.

These guys are all trying a bit too hard to be different. The Vetrix works because…

This is also electric and ugly too!

listening to the sweet sound of a bike engine is one of the best parts of owning one. wouldnt dare to think of owning an electric bike.

thought it looked familiar…remember this… 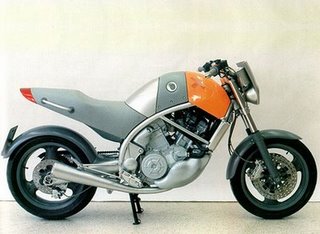 i dont mind it at all…