Jon Snow is a Tosser

Riding in yesterday towards Kings X, i decided to sit behind a bus until it pulled over due to hazards ahead. Just as it did I took a look, and before I pulled out, the cyclist (in luminous colours) just swung from beside me cutting across my path. Pissed off, I dipped the clutch and gave a little blip to let him know I was there.
Once around the bus, rather than ride off angry, i pulled alongside this guy and simply said

“Why dont you try looking before you pull out?!!”

to which I received an arrogant reply,

for a split second i was speechless, and he repeated himself. A shake of the head and I was off. Cheesed off, I could have been a lot more aggressive, or waiterd for him at the lights with my carbon fibre knuckle protectors, but dont wanna add fuel to the ever increasing bike haters out there. Also theres no way I’d get away with hurting a Channel 4 frontman.

Next time I hope to see in the Channel 4 News…

“Jon Snow knocked off his cycle, suffers agonising surgery to remove hot exhaust from his anus!” 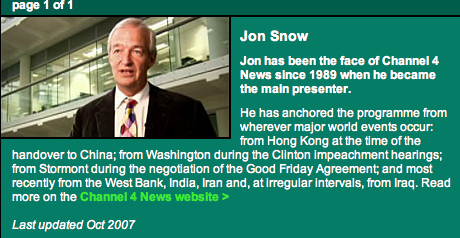 He’s not just a channel 4 frontman…he’s kind of one of the people responsible for keeping our jobs at the N. G., mine included. I think this possibly could be one of those rare heated moments that happens every day, with almost every road user…John is an aquaintance, and he’s a really really nice person…I find it hard to imagine he’d say something like that unless he’s just lost his temper before that.

Everyone has bad days, but maybe it’s made worse because he’s so well known? If you didn’t know who he was, would you still have come online to so openly complain? Or would you not bother?

Blimey! Well done for the restraint!

I’ve got a real high tolerance level for twerps.

Ok, he may be well known - but i never knew that until he swore at me and I took a good look at his face (all i wanted to do was let him know he could have caused an accident had i have not watched him make that stupid manouvre)

People in the spotlight get treated just the same to me - i wont give special treatment to anyone. But equally, i wont be rude to anyone either.

He may have done a lot of fantastic things, but it was NO excuse for him to react to me the way he did. Maybe I wouldnt have posted this if he wasnt famous, but why should someone in his position get all that praise if there is another side to his personality which the cameras and media doesnt see (this is quite a common thing with ‘celebs’) Fine, I agree that they may be hassled from time to time with their jobs, but being, i assume, an intelligent man, maybe he should assess each situation as it arrives, and dont assume everyone wants a piece of him. I coiuldnt care less who he is!

Sorry for the rant, but if you know him, let him know i havent forgotton his rudeness, and a simply apology would be sufficient for me not looking out for him next time he’s en-route to work.

If I see him next Friday, I’ll mention it… I might not see him though, so I’ll let you know if I get a chance. He really is a nice person imo.

I understand what you’re saying, but I thought you might like to know he wasn’t very nice to you on the road, no, and thats not ok, but he isn’t as horrible as you are making out, and I thought maybe if you knew that he’s not like that all the time, it might make you feel a bit better…

Well done for not lamping him

Being a great person is also about recognising your mistakes.

Thanks Mole, I hope you get to talk to him.

If I had seen him this morning before talking with Mole, I certainly wouldnt have ridden off this time, without letting him know how i feel - one way or another!

I dont see that theres any point in getting upset with the muppets out there. Ive met a few in my time on the roads, and it nearly always is an angry - no wrong word - snappy affair.

I have a policy that I say nothing, and do nothing, other than give them a big grin and if they have really pissed me off I blow them a kiss. That always freaks them out, especially the males

Its about frame of mind. With the right one, after a while you will grow to find their antics a source of amusement, not frustration. Just be ready to anticipate them.