How to fix some rust on my Givi frame?

What should I do about this? It is a GIVI frame for a top box. 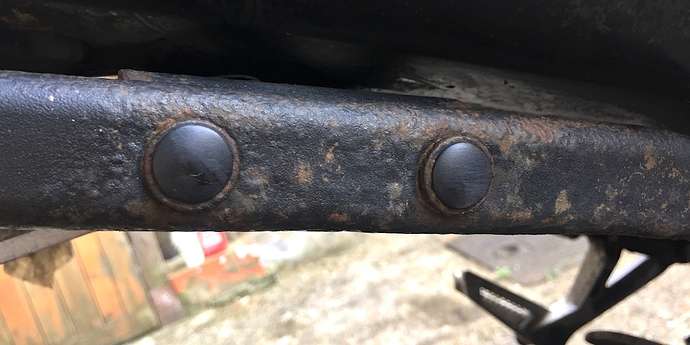 Just put some Hammerite rust paint over it?

wire bush it to get the loose stuff off first

Prep prep prep. That is the name of the game.

I would rub it down as much as possible and prime coat it before getting a solid black top coat.

Hammerite would work but is a quick fix which won’t stand the test of time.

For that much effort I am tempted to pay the £90 to simply replace the frames! I do basic tasks but reluctantly, and without any sort of garage.

I would be happy enough to simply brush the rust away then regularly give the frame a rub with some ACF-50, but that was clearly not enough when it had the added protection of paint to risk leaving it with bare patches. So with the bike having to live outside (although not normally untouched for four months) any solution is only going to be temporary anyway.

The chain has surface rust and needs brushing too, having already checked the links, so I was going to brush the frame at the same time anyway. But I thought the selling point of Hammerite was you do no need to do that?

Truth be told you’re only delaying the inevitable rust patches.

My BMW is 18 months old and has rusted components like you wouldn’t believe! It does get all year round use but it is garaged. C’est la vie.

Get it blasted & powder coated. It’ll be cheaper & probably last longer than buying a new set from Givi.

Alternatively, call it ‘patina’ & live with it. When it comes to time to sell, just find a hipster & you’'ll also be able to add a bit to the price for it.

For that much effort I am tempted to pay the £90

It depends on how you value your own time. To rub it down properly, prime it and coat it over several sessions, plus running around to buy the materials, is going to be hours and hours of work, especially if you don’t have a garage. And it’s a real arse doing paint work outside in the dust.

It could easily be nine hours work = £10 per hour.

I’d just leave it. If it bothers you buy some BBQ spray and spray it on top.

Unless the rust becomes a structural issue it’s character. When it comes to sell you can decide what to do with it based on the condition of the rest of the bike…

Or have a look on eBay for a cheap replacement in better condition?

My concern is mainly protection to prevent it leading to a structural problem. It would still be nice for it not to look too bad, though having bought some panniers they can hide it anyway.

For selling I would probably just remove the frame as I doubt it would add that much value. But it is an outside bike which already has a few dings so I have given up on preserving value. I am happier now getting my value from it in the saddle. Though it would be interesting to see how nice a professional clean can get it looking.

This afternoon I will work on the chain and also brush the rust off the frame to see how it looks. Then most likely buy a can of Hammerite to apply with a brush. That way I can cover the bike (with something wide on the seat) to protect it while drying. Removing the frame is easy, and needs partly doing to add the pannier frame, but I would have nowhere safe to let it dry after spraying.

A combination of a multitool attachment and manual brushing and it looks a bit better, although patches still have a stubborn golden hue. Not embarrassing now, but I definitely feel it could do with a touch of paint for protection. 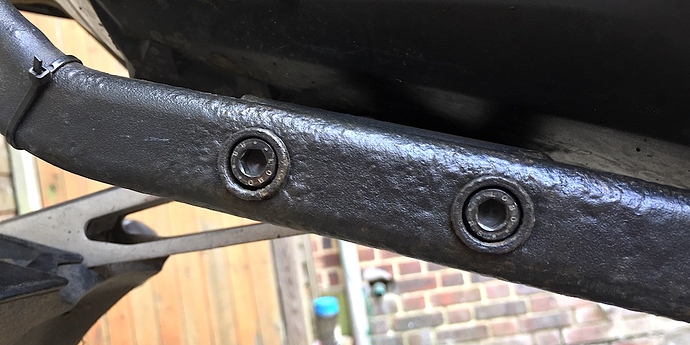 Sadly I had run out of chain cleaner so had to leave that job until tomorrow. A little annoying as, after the battery spent the night charging on the windowsill, I could have taken it for a little ride.

This was supposed to be a generic topic on rust (grrr, Jay), and so what can be done to protect this, the head of the pivot pin for a pillion peg? 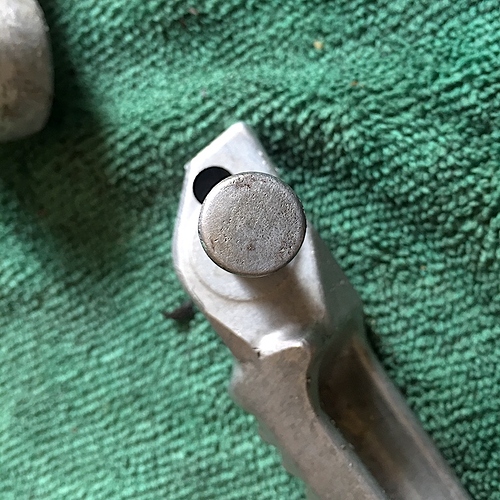 It is always rusting on top, and looking at the surface it is no wonder. So other than brushing it off daily. As ACF-50 never lasts long, is there some other suitable treatment?

Incidentally, I had to remove that peg to remove the Givi frames so I thought I might as well clean it up at the same time. The frames currently drying in the bath. Not the best looking paint job, but the protection is the main thing. But apart from one bracket (on the rear brake line, I think from memory) those pillion pin heads are the worst place for rusting on the bike.

Flatten it back then paint it, I’d use a decent file on that rather than a power tool.

eBay knows me so well. Like most people on a Sunday afternoon I was buying a pack of diodes, and it suggested some pivot pins for a CB400F. Checking the part codes, it seems Honda use the same pins on every bike they make. And a pack of two for £4.77 it was too much to resist. Although the pannier frame replaces one of them as a mount point, so it gives me a spare for when it next rusts over.

Anyway, it looks like a garden fence, but at least it should be protected from rust for a while. 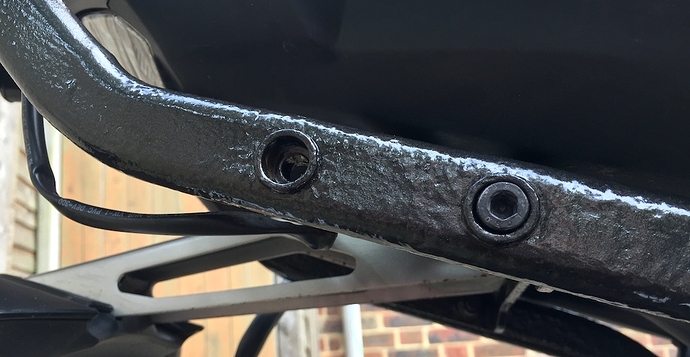